When I came here [Jaffna] at the beginning of this century, I was told that even at midnight women could move around without any fear or concern about security. But now, there is fear and apprehension even when one is confined to houses. Rather than saying that only those who have come from the outside commit acts causing fear, it is more appropriate to say that it is the sons of Jaffna who largely commit such acts, without any shame or concern. A careful scrutiny would show how some one of us was there operating and is still operating, behind every wrong committed by the outsiders. We should build unity and an internal mechanism so that our people don’t turn into pimps and servants to the outsiders, said Trincomalee-based retired Tamil Justice C.V. Wigneswaran, while addressing the Vaddukkoaddai YMHA on the Pongkal day. 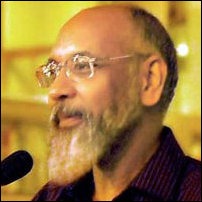 The spirit in which Justice Wigneswaran has made his comparison and comments in fact exposes a section that with a ‘revisionist’ agenda chooses to harp on the deteriorating social conditions under an occupying and colonial military to attack and weaken the liberation aspirations of the Eezham Tamil nation, to absolve the occupying Sinhala military and to ultimately buttress the genocidal State and regime of Sri Lanka, commented alternative political activists in Jaffna.

Further comments from the activists:

The deteriorating social conditions are clearly a manifestation of the militarized outside rule.

Only those who knowingly work for deviatory agendas would argue that the outsider of proven genocidal intent is not engineering or is not elated at the social deterioration in the country of Eezham Tamils.

People like Justice Wigneswaran cite at the social deterioration with a sense of sane concern to prepare the oppressed nation of Eezham Tamils towards mobilisation and liberation.

However, there is another section that cites the deterioration to detract the Tamil struggle and to detract the efforts of Tamils to rule themselves. But this section ultimately shows extraordinary care in protecting the Rajapaksa regime and in upholding the genocidal ‘unity and integrity’ of the State in the island.

This section also chooses to use the opportunity to attack the foundations of Eezham Tamil nation formation, especially the Jaffna social formation and the pro-imperialist or bourgeoisie attitude of Tamil elite as responsible for the social evils.

There may be some truth in it, but the attackers are not outsiders. They are part of the same society, even though they may be now waging the attacks by living in Colombo or in the cities of the capitalist West, but receiving guidelines from somewhere else.

For ages, they were good only in alienating the credibility of their claimed ideology from the mainstream Tamil society by choosing to work for the agenda of others; whatever unjustifiable it was for their own people.

Informed senior media sources in Colombo say that international media funds are provided to this section by a power making inroads into the island, in order to protect the regime and State.

It is time that this section first thinks of its own soul searching – why it was never able to identify itself with the righteous aspirations of the masses; why it was never unable to make any positive impact among its own people if it really cares for their society?

The genocidal war and the unfolding aftermath have created an unprecedented awareness among Tamils on the designs of the powers and their imperialism. But divided between competing powers and lured by them, opportunistic and spineless elite among Tamils muffles and hijacks the awareness of the grassroot.

When Tamils are at a historic junction needing a fresh polity and leadership in facing the world Establishments, serving for the survival of a criminal Establishment at Colombo or serving another one of the powers in competition doesn’t differentiate the section under question from the opportunistic elite.

At least at this stage, if this section could not able to identify itself with the aspirations of the Tamil mainstream and through that could not able to win their confidence in effecting positive social transformation, then it is only heading for remaining a confounded negative element in the times to come, commented the alternative political activists in Jaffna.

Justice Wigneswaran, in his address at the opening function of the new YMHA office in Vaddukkoaddai, was repeatedly touching on the issue of forced or ineluctable prostitution in Jaffna.

The former Justice of the SL Supreme Court was citing the case of a mother of a baby and widow of a slain LTTE fighter, who when went seeking job was abducted and gang-raped by eight ‘armed personnel.’ The women now live the life of ineluctable prostitute to bring up the child, Justice Wigneswaran said.

The cultural deterioration in the Jaffna Peninsula is a planned one, Wigneswaran said, adding that women are taken to the South to engage in prostitution, and rape, robbery, abduction and hired assassination take place at a hitherto unheard scale.

Talking on drug abuse, the Justice said that exposure of school children to drugs, pornography, sexual abuse, late night carnivals etc., that go on in Jaffna are aimed at changing the life attitude of young men and women so that they would never think of seeking their rights in future.

The thrust of his address was rebuke at the Tamil society with the intention of developing community movement, which seriously lack at the moment.

Commenting, alternative political activists in Jaffna said that the Tamil polity, political parties, activists and the elite both in the island and in the diaspora are deliberately detracted from mobilising community movement of Tamil’s own.

They are expected to speak and act only what the powers say. Others would do ‘Development’ for them. It is enough if they from time to time appreciate that ‘development’ and donations such as bicycles, sewing machines etc.