People of Vanni closed themselves inside their huts and refused to come out when the Parliamentary Under Secretary of State of the UK Foreign and Commonwealth Office, Alistair Burt MP, accompanied by the occupying Sinhala military, wanted to ‘speak’ to the uprooted Eezham Tamils at Keappa-pulavu on Thursday. The reason was two-fold: loss of faith in the modus operandi of foreign dignitaries visiting them with the occupying military and then coming out with statements not recognizing the on-going genocide but buttressing the genocidal State; and the other reason was suffocating intimidation by the occupying Sinhala military that no one should tell anything controversial to visiting foreigners. The same military officials bringing visitors to them in the daytime would turn into torture-interrogators in the night time, Eezham Tamils of Vanni commented.

Visit of UK team to Keappaa-pulavu

An SL military intelligence official in police uniform recording the conversation of a woman to UK Under-Secretary, and the frightened look of the woman at the recording.

When Alistair Burt, the politician Under Secretary (a junior minister) wanted a ‘public relations exercise’ no one dared to come out at Keappa-pulavu. 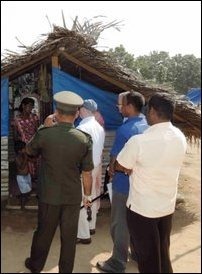 Then the Under Secretary, in the company of SL military, started approaching houses to talk to people. When the Under Secretary started speaking to a woman in one of the huts and when the woman was about to respond, a Sinhala military official started recording it in his mobile phone and seeing that the woman cut short the talk and hurriedly went inside the hut.

The UK party was shocked at the scene and silently withdrew.

If people do it out of fear and loss of trust, the SL military stages such insult to visitors because the military is confident in the Establishments of the world ultimately backing it, commented local Tamil civil activists.

The US officials visiting Jaffna on Sunday was subtle in their comments reported in the media that SL government has the responsibility of avoiding complaints coming. Do they mean further intensification of the kind of gag practised by the SL military, ask alternative Tamil political activists in the island.

Alistair Burt visiting Jaffna also went to Vanni to see Keappaa-pulavu, a controversial resettlement village in the forest tract adjacent to the genocide land of Mu’l’li-vaaykkaal.

The villagers of Keappaa-pulavu were not allowed to resettle in their original land as the occupying Sinhala military plans building there the largest cantonment for the Mullaith-theevu region.

It is said that the Sinhala military project is coupled with harbour and airstrip projects too.

The International Organization of Migration (IOM) and the UN sided with the occupying Sinhala military in declaring the ‘completion of resettlement’ without caring the protests and forceful relocation of the people by the SL military.

Between Trincomalee and KKS, Mullaiththeevu–Keappaapulavu is a major SL military project in the making.

The real reason for Alistair Burt, a Conservative Parliamentarian, choosing to visit Keappa-pulavu needs scrutiny as the UK’s secret defence deals with genocidal Colombo has a history, political observers in Jaffna said. 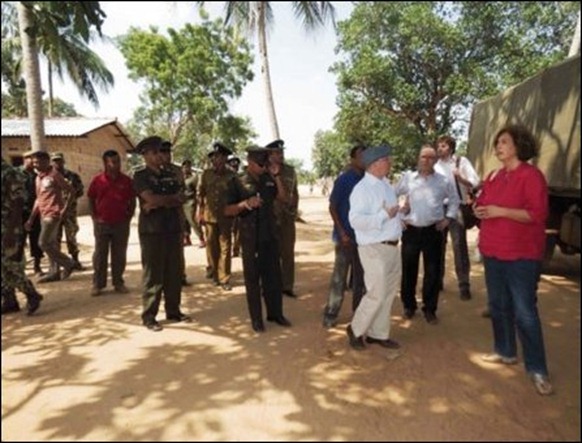 A scene of comparison was noticed in the visit of an Australian team led by its Deputy Leader of the Opposition, Julie Bishop, to the same Keappa-pulavu, earlier this week.

Prior to their visit, the occupying Sinhala military summoned the local people to a meeting and warned them that they shouldn’t be seen outside during the visit of the foreign dignitaries.

If they were seen they would be ‘missing’ in the night, they were warned.

Hence, there were no people, when the Aussies went there.

But the Australians, led by the Opposition Deputy Leader and Foreign Affairs spokesperson Ms Bishop, were more interested in knowing only about refugees going to Australia.

No wonder, Ms Bishop told ABC Radio’s Connect Asia Programme on Tuesday that during her visit she had neither seen nor heard evidence on persecution of Tamils.

But news sources in Jaffna confirm that Julie Bishop, meeting some TNA parliamentarians and unsettled people of Valikaamam HSZ, now in camps at Koa’naavil, were clearly briefed of all the facets of the miserable plight faced by Tamils in the island.

Yet, if the Australian shadow foreign minister had chosen to tell something else on her visit, what trust could be expected from the affected people towards the foreign visitors, ask social and human rights workers among Tamils.

TamilNet: 01.02.13 ‘Slap on the face reception’ to UK Under Secretary visiting Vanni