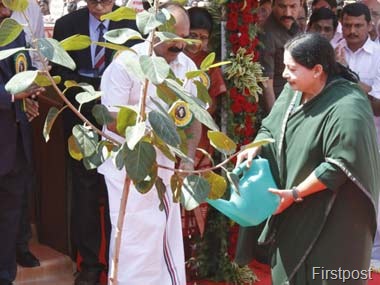 Even as India continues its refusal to take a stand against Sri Lanka for its alleged war crimes despite the recent images of Prabhakaran’s young son’s alleged execution, the Tamil Nadu chief minister J Jayalalithaa has taken the bull by its horns.

Her decision not to allow the Sri Lankan athletes to set foot on Tamil Nadu becomes India’s veritable response to the island’s regime.

This is the second time, she is telling both Delhi and Colombo in unequivocal terms that if India continues to indulge in diplomatese, even after mounting evidence of Sri Lanka’s alleged war crimes against ethnic Tamils and the growing tide of international outcry, the state will not keep quiet and has every reason to tick them off.

Last time when Jayalalithaa did something similar was in September when she didn’t allow Sri Lankan students play a friendly football match in Chennai for which Delhi had granted permission. She not only packed the students off, but also told the Centre that “the decision of the Indian government had humiliated the people of Tamil Nadu and I condemn the centre for this.”

The context for her action then was the Centre’s insensitivity to the state’s demand that Sri Lankan military officials should not be trained in India. The Centre not only trained the officials in the country, but also sent a number of them to Tamil Nadu – nine to Avadi near Chennai and two to Wellington near Ooty within a span of two months.

The move was surreptitious and was without the consent of Tamil Nadu, when there was a groundswell of emotions against Sri Lanka for the killing of thousands of Tamil civilians, and other war crimes.

When Jaya had raised the issue of the training with the Centre, it tried to obfuscate and play it down by answering her through a political low-weight such as Pallam Raju. Jaya had asked the Centre to keep the state informed when it had official visitors from Sri Lanka.

Some observers see Jaya’s latest move as smartly political because that is the kind of outrage that the killing of Prabhakaran’s son has generated in the state. Unlike in the past, when the LTTE-led war for independence in Sri Lanka was only a marginal political issue, since 2009, the context and complexity have completely changed.

The Channel 4 footage of the killing of innocent civilians and summary executions, successive UN reports that pointed fingers at the Rajapakse regime and its military, and the snowballing international opinion against Sri Lanka had made a fundamental change in the minds of the people of the state. They don’t equate Sri Lankan Tamils with LTTE, which the island’s regime and its proxies are still trying to do, and hence have strong fraternal emotions.

Sensing it early, Jayalalithaa had made it part of her political agenda in 2009 LS elections, which found considerable resonance with the electorate. When she assumed the chief minister’s office in 2011, she also passed a resolution in the state assembly asking for economic sanctions against Sri Lanka and UN action against its president for war crimes. During the elections, she had maintained that Rajapakse should be tried as a war criminal.

As soon as the images of Prabahkaran’s son became public, she said it was a “war crime of grave nature” and was unforgivable. “All those guilty of war crimes should face the International Court of Justice,” she said asking the Centre to work with the US and others at the UNHRC.

Besides probably being a genuine supporter of the cause, Jaya knows that the conditions of the Tamils in Sri Lanka as well as the evidence of the country’s war crimes have enormous political value. It’s very clear that she will certainly make it one of the issues for the 2014 Lok Sabha elections. Asking for a mandate for her to be a key-stakeholder of the government in Delhi will make tremendous sense in this context. The more intransigent and mulish Delhi becomes, the better for her.

The man to lose out on this game will be Karunanidhi because he is in an unfortunate alliance with the Congress which is not only refusing to take any action, but also seems to side with Sri Lanka. Karunanidhi has been making all the right noises, by convening TESO, passing resolutions which his son hand-carried to the UN, and even by asking Delhi to do something.

But, his hands are tied. If the Congress doesn’t do anything, he cannot walk out of the alliance. Politically he will isolated and the corruption cases that his family and party members are involved will be jeopardised. His helplessness was visible even in his latest statement in which he said that he was pained by the Centre’s silence. What else can he do?

Its total freedom from the national allies is what allows Jaya to be a lone warrior on the issue. And she has been playing it with consummate effect. Her steps are audacious and unyielding. In the latest episode, she not only made it clear that Sri Lankans are unwelcome to her state, but also added that she has no interest in the Asian Athletic meet if it involves the islanders.

Karunanidhi, on the other hand, has been able to make only statements, stage fasts, and indulge in NGO-style soft policy advocacy initiatives because he is joined at the hips, at least for the time being, with the Congress. The DMK cannot wash away the blame that the alleged Tamil genocide and other war crimes in 2009 happened when it was cloistered with the Congress. Even when a team of MPs were scheduled to visit Sri Lanka later, it was Jaya’s AIADMK which seized the opportunity first to opt out. DMK followed suit, seemingly repeating its catch-up act.

The issue will get hotter after the March UNHRC session where the US will move a new resolution against the island nation. India will be closely watched. Whether it makes a certain departure from its earlier stand of ambiguity and double-speak or not, Jaya will surely step up her offensive.