New Delhi Establishment’s envoy in Colombo, Ashok K. Kantha, accompanied by his wife Mrs. Sharmila Kantha paid tribute at the newly ‘rediscovered’ IPKF memorial at Palaali in the Sinhala Military Zone (SMZ) on Saturday. Joining the couple in cherishing the legacy of the IPKF was Colombo’s occupying Sinhala military commander in Jaffna, Maj. Gen Mahinda Hathurusinghe, senior officers of the SL military, New Delhi’s Defence Advisor at the Colombo High Commission and the Establishment’s Consul General in Jaffna. New Delhi already has a memorial built for the war-crimes-accused IPKF at Colombo. New Delhi’s current gesture of rediscovering another memorial at Palaali along with the occupying genocidal Sinhala military signals negatively when there is demand for international investigation of war crimes in the island. 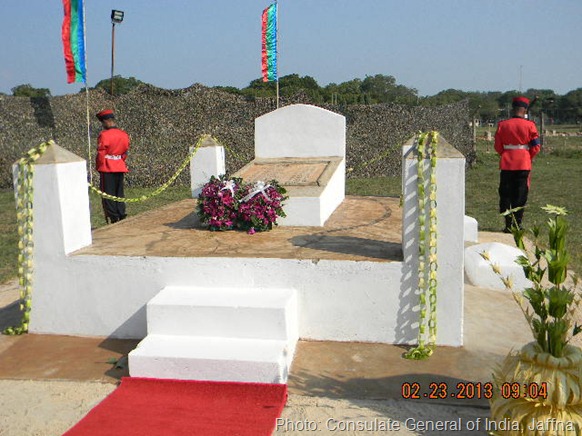 New sources in Jaffna say that the memorial was ‘discovered’ along the border of the Sinhala Military Zone (SMZ). The low resolution photos released by the Indian consulate are not clear on the background of the locality. Something screens the background. [Photo: Consulate General of India, Jaffna]

“A long-forgotten memorial of Indian soldiers inside the Palaly High Security Zone has been re-discovered,” reported The Hindu known for its pro-Colombo and anti Eezham Tamil stand on Saturday, adding, “as in the case with forgotten historical structures, the discovery was an accident.”

The IPKF ‘memorial’ at Palaali, consisting of 7 structures, remembers 33 ‘martyrs’ of the Indian elite special forces of the 10 Para Regiment. A company of the Regiment suffered casualties while it was heli-landing to raid the LTTE headquarters on October 12, 1987, The Hindu further reported.

The Hindu’s ‘historical concern’ found elucidation in the speech of genocidal Sri Lanka’s Commander, Hathurusinghe, at Palaali on Saturday, when he said that the LTTE committed a ‘war crime’ in shooting the parachute troops while they had not landed and were still descending.

While The Hindu was reporting on the ‘High Security Zone’, Hathurusinghe speaking to media in Jaffna on Saturday denied the existence of the HSZ. He said that out of the 11,284 acres of land, 5,282 acres had been handed back to people and another 6,000 would be handed over soon in different stages. His claim was that most of the land is the property of the State in Colombo and therefore there was no question of occupation.

A permanent Sinhala Military Zone (SMZ) has already been created around Palaali, replacing the so-called HSZ, is the observation of news sources in Jaffna.

New Delhi’s envoy Ashok K. Kantha is currently engaged in fulfilling many of the programmes of genocidal Colombo in the territory of Eezham Tamils, news sources in Jaffna said.

While sections of news circles in India indicate that there is a favourable response in the New Delhi Establishment in promoting cases of war crimes investigations against Colombo, such as what the Channel 4 is currently engaged in, another section of political observers citing the actual activities of New Delhi say that that the aim is to get only strategic land in the island at the cost of justice to Eezham Tamils.

The political observers refuted views that the New Delhi-The Hindu mission is merely to pass the blame of war crimes on the LTTE to diffuse the current public sentiments in India, especially in Tamil Nadu.

New Delhi’s direct war crimes in 1987-89, complicity in war crimes in 2006-2009 and continued abetment of structural genocide of Eezham Tamils are yet to be investigated internationally.

According to the observers, the whole thing of promoting the war crimes awareness against Colombo on one hand but simultaneous deal with genocidal military of Colombo on the other hand is engineered to gain New Delhi’s interests in the island either in competition or in ‘strategic partnership’ with Washington.

The political parties, civil movements and above all the public in Tamil Nadu should not be carried away by the machinations making them deviating from achieving fundamental justice to the question of Eezham Tamils, the observers said.

The peoples movements in Tamil Nadu and elsewhere in India have to guard themselves against deceptions, the observers further said.

PDF: Press Release from the Consulate General of India, Jaffna 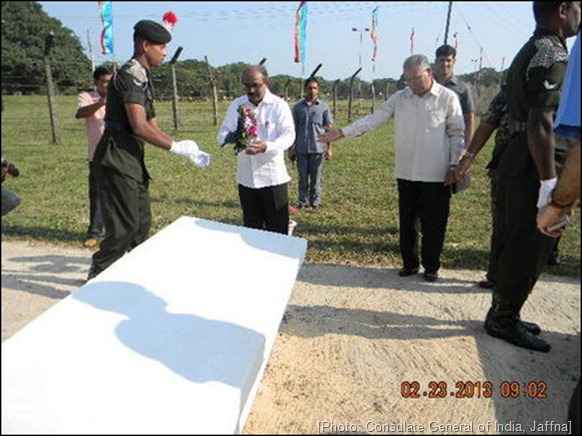 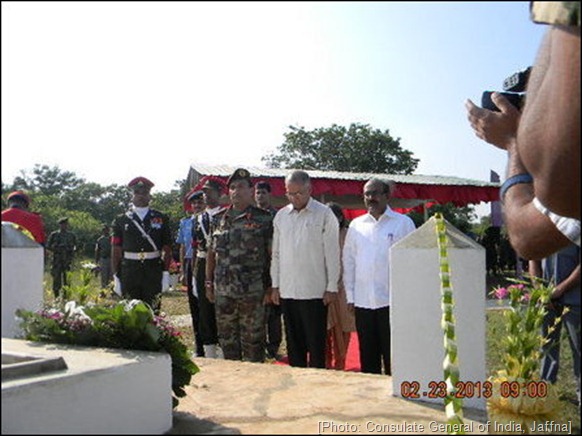 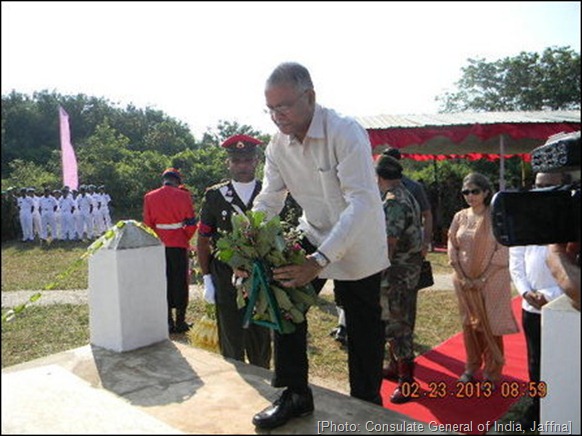 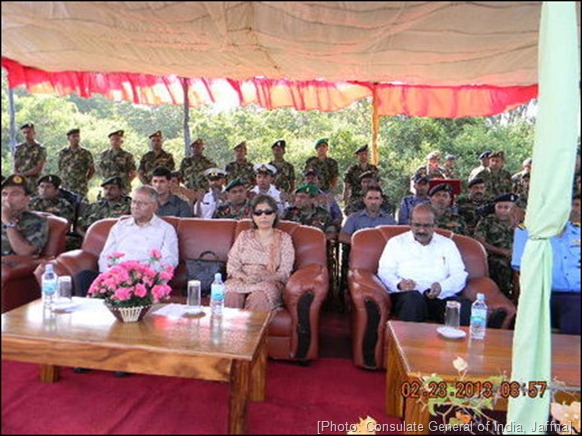