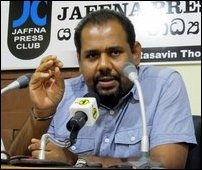 An internationally monitored interim administration in the North and East under UN supervision outside the parameters of the Sri Lankan Constitution is the only way forward to stop the genocide being committed on Tamils, especially to put an immediate end to the accelerated structural genocide taking place in the Tamil homeland, reiterated Gajendrakumar Ponnambalam, the president of the Tamil National Peoples Front (TNPF), in the first press meeting held at the newly opened press club in Jaffna on Monday. The current indications are that the UNHRC would end up giving another year of time and space to Colombo and the TNA that supported the resolution last year without a principled approach is answerable to what resulted from the resolution in the past 12 months, Gajendrakumar further said.

Blaming the Tamil National Alliance (TNA) and the section of media that were refuting the position the TNPF took during the last round of UNHRC sessions, Mr Gajendrakumar said that the so-called step-by-step approach is a farce on the part of the powers that were limiting the UNHRC resolution to the internal paradigms set by the Sri Lankan State.

Arguing that the way forward could be nothing else than securing the territoriality of the Tamil nation in the North and East to safeguard it from existential threat, by clearly articulating the Tamil demands to the international community, he reminded the press in Jaffna that an interim solution is needed even to fulfil the iota of demands being advocated by the IC.

Limiting the investigations to the last phase of the war is ignoring the Tamil demand for investigation of the protracted genocide since the British left the island, Gajendrakumar said.

To ensure that people in the North and East are able to take part in free and fair investigations and present their evidences without any fear, an extra-constitutional interim administration must be in place, he said.

The leaders of the TNA and the section of media that were trumpeting about the resolution framed last year are now answerable to the people for their utter ignorance and lack of a principled approach with regards to the Tamil aspirations, the TNPF leader said.

Citing reliable sources and information obtained through direct contacts, Gajendrakumar said that the resolution to be framed this time is going to end up giving another year calling for the implementation of the resolution tabled last time. The situation on the ground has only worsened during the last 12 months, he said citing that the best evidence to the trend is nothing else than the latest report by UN High Commissioner for Human Rights Ms Navaneethampillai.

In the meantime, the TNA bringing in the UNP into the North and East, harping on a ‘regime-change’ agenda has come under severe criticism among Tamil political analysts in the island. They cited Ranil Wickramasinghe favouring the Sinhala military to stay in the Tamil country and advocating that the solution to the ethnic question is implementation of the LLRC. Mr Wickramasinghe was also seen ridiculing the sections that call for federal solutions.

The ‘regime change’ strategy meekly followed by the TNA on the ill advices of the powers, by taking the side of the former SL military commander Sarath Fonseka and the UNP in the last presidential election of Colombo, is now interpreted in India by unscrupulous elements like Subramainam Swamy as a proof for Tamils endorsing the SL military that fought against the LTTE, Tamil political observers in the island cited.

Elements in India that don’t hesitate to deploy genocide a tool to promote imperialist interests and back Rajapaksa regime, now use the imprudence of the TNA to argue that there is no need for war crimes investigations, the political observers further cited. 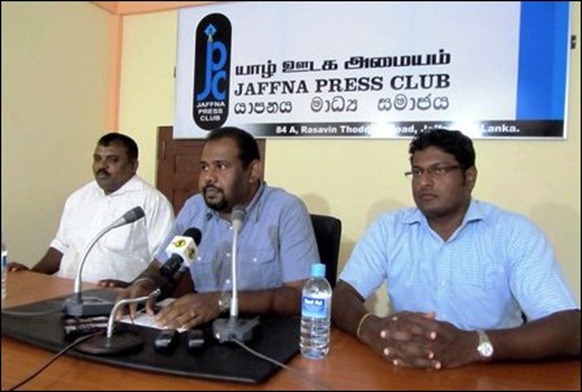