“India should move a single-line resolution in the Council condemning the genocide of Tamils in Sri Lanka and demand an independent international investigation,” said AIADMK’s MP, Dr. Maitreyan, during the parliamentary debate in New Delhi on Wednesday. Citing Tamil Nadu Chief Minister Ms. Jayalalithaa linking the war crimes to the days of the Nazi Germany of Hitler, Dr. V. Maitreyan condemned Indian Foreign Minister calling Sri Lanka a friendly country. “Sri Lanka, as a friendly country, is a thing of the past. How can a country, which carried out a systematic genocide of my umbilical-cord brethren, Tamils, be termed as a friendly country,” he asked, blaming India for diluting the impact of the UNHRC resolution last year, by softening its tone, tenor and contents. 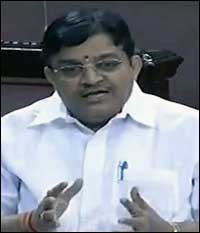 The UPA government refuses to accept the root cause of the conflict. India’s Foreign Ministers have changed but nothing changed in Sri Lanka. In fact it has gone from bad to worse, Dr. Maitreyan further said.

Speaking at the debate, Communist Party of India’s National Secretary, Mr D. Raja said, “After 2009, what is happening today is a structural genocide.”

There were interruptions when Mr Raja said that the Indian government collaborated with the Sri Lankan government in the genocide of Tamils.

“I want the government to put its hand on its heart and tell us whether or not the Government collaborates with the Sri Lankan Government in the genocide of Tamil people,” Raja asked the Indian Government to “be truthful to the nation.”

At this point, amidst interruptions, Dr Maitreyan reminded to the house that it was Rajapaksa who had gone on record saying that it was because of India that they had won the war and that they were only proxies. India has not denied it officially, Maitreyan said.

Raja criticized the Indian Government harping on the 13th Amendment. 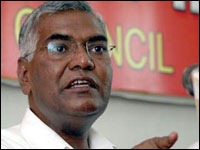 He came hard on the Foreign Minister for saying, “we would encourage the United States and Sri Lanka to directly engage on the draft resolution and aim for a mutually acceptable outcome.”

“I feel very much ashamed of this. How can you say that let America and Sri Lanka talk to each other and come to some understanding, and we will be spectators,” Raja asked.

Citing the times of Nehru and Indira Gandhi, Raja said, “I accuse the Congress-led UPA-II Government that they are letting down this nation.”

It is not just one war crime or human right violation. It is genocide […] We cannot be spectators, meek onlookers and leave it to the US and Sri Lanka, Raja said, urging that India should move the resolution, vote against Sri Lanka and demand an international investigation into the war crimes and human rights violations.

“Otherwise, we will betray the trust that history has in India,” he concluded.

DMK’s Tiruchi Siva speaking at the debate told the Government to decide itself, “whether you want to be friendly with the inhuman and unfriendly country which is butchering its own people or whether you want to maintain friendship with your brethren in the southern part of this country?”

Mr D. Bandyopadhyay from West Bengal and BJP’s Venkaiah Naidu from Karnataka were among the members demanding action from the Indian Government in favour of Tamils in the island.