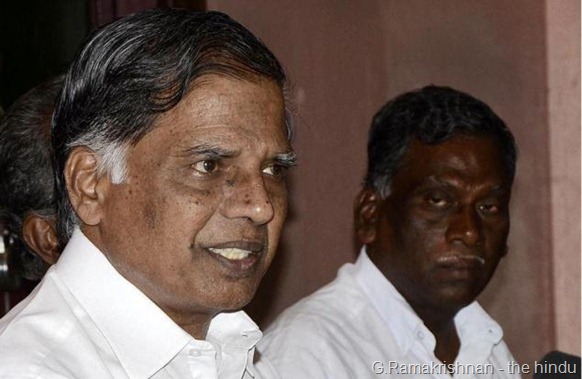 India should press for an independent enquiry into the alleged human rights violations by Sri Lankan armed forces during the war against Liberation Tigers of Tamil Eelam, at the United Nations Human Rights Council meeting in Geneva next month, said G. Ramakrishnan, State secretary of the Communist Party of India (Marxist).

Mr. Ramakrishnan told reporters here on Thursday that around “40,000 innocent Tamils were killed” towards the end of the war. Media report on the murder of the LTTE chief Prabhakaran’s 12-year-old son Balachandran exposed the worst human rights violation by Sri Lanka, he alleged.

India should move a resolution in the UNHR council meeting for an independent probe into such human rights violations in the island nation.

On the drought relief announced by the State Government, Mr. Ramakrishnan said that the relief should not be confined only to farmers who have lost at least 50 per cent of their crops, but also to lakh of farmhands who have been rendered jobless, owing to the drought situation.

Besides, the Government should make efforts to mitigate the impending drinking water crisis throughout the State.

The party has begun a nationwide campaign on the “wrong economic policies” of the successive Governments in the Centre, led by the Congress and the Bharatiya Janata Party that affected the livelihood of the common man.

The Centre has planned for public private partnership in the areas of health and education, which means the Government wanted to privatise these services. The move to hike the price of diesel by Rs.11 a litre for public transport sector would hit the common man.

As a result of the new economic policies, the gross domestic product had touched its lowest of 5 per cent in the last 10 years. Similarly, the food inflation had gone up from 7 per cent to 10.56 per cent between January 2012 and December 2012, he said.