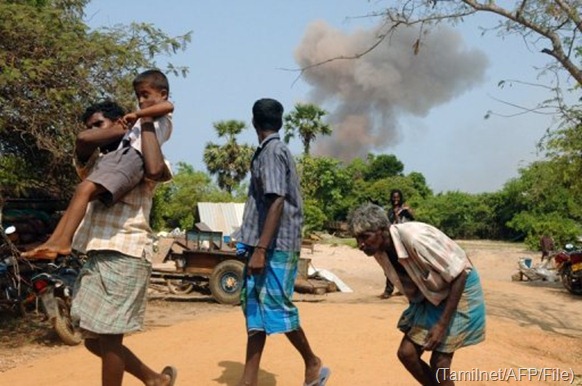 The Sri Lankan military committed numerous war crimes during the final months of the country’s 26-year civil war, according to a documentary aired for the first time Friday, amid vigorous protests from Colombo.

Using graphic video and pictures taken both by retreating Tamil Tiger rebels, civilians and victorious Sri Lankan troops, "No Fire Zone — The Killing Fields of Sri Lanka" presents a chilling picture of the final 138 days of the conflict that ended in May 2009.

Filmmaker Callum Macrae insisted before the screening that the film at the UN Office at Geneva that it should be seen as "evidence" of the "war crimes and crimes against humanity" committed by government troops.

"The real truth is coming out," he said.

Sri Lanka’s ambassador in Geneva, Ravinatha Aryasinha, strongly protested the screening of the film on the sidelines of the ongoing UN Human Rights Council.

He described it as "part of a cynical, concerted and orchestrated campaign" to influence the debate in the council about his country.

Human Rights Watch and Amnesty International, which hosted the screening, are calling for the council to order an international probe.

They charge that Sri Lanka’s domestic Lessons Learnt and Reconciliation Commission (LLRC) has glossed over the military’s role.

The film for instance alleges that a "no fire zone" set up by the government in January, 2009, basically functioned as a trap for the hundreds of thousands of civilians who flooded into it in the hope of finding safety.

The area was heavily shelled, and in the film maimed and bloodied bodies, of men, women and children, lay strewn.

The UN has estimated that some 40,000 people were killed in the final months of the war, most of them due to indiscriminate shelling by the Sri Lankan military.

Peter Mackay, a UN worker who was trapped inside the zone for two weeks, questioned in the film why the government would set up the "no fire zone" within range of all of their artillery.

"Either you don’t care if you kill the people in that safe zone or you are actively targeting them," he said, adding that he believed the latter was true.

He and others describe how aid-centres and make-shift hospitals were shelled soon after UN or Red Cross workers informed the government of their coordinates, which is ironically standard practice to ensure that such places are spared in bombing campaigns.

The footage provided by the retreating Tamil Tigers and civilians is devastating, showing parents wailing over their dying and dead children, but the images provided by the government forces are perhaps even more shocking.

Video of a Tamil commander first being interrogated, and then a picture of his mutilated body in the dirt; naked and bound prisoners coldly executed; dead, naked women, who have clearly been sexually abused filmed amid degrading comments by onlooking soldiers.

And then there is footage of the 12-year-old son of Tamil Tiger leader Velupillai Prabhakaran, Balachandran, whose body is seen with five bullet holes in his chest.

He was not caught in cross-fire: a separate video shot two hours earlier, shows him sitting in military custody in a bunker eating a biscuit.

The Sri Lankan government has cast doubt on the authenticity of the footage, with Aryasinha insisting Friday it was of "dubious origin".