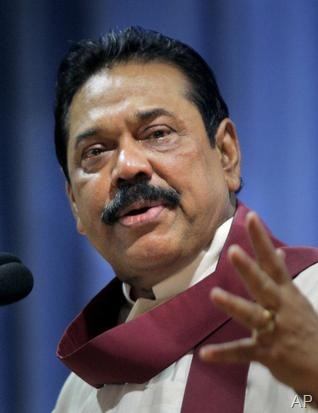 “Had it happened, I would have known [it]. It is obvious that if somebody [from the armed forces] had done that, I must take responsibility. We completely deny it. It can’t be,” he told The Hindu in an exclusive interview.

On new evidence of wrongdoing in the final stages of the war in 2009, collated by international organisations and media outlets, he said that putting out such reports and videos was their job. “We must not merely look at one side. They must not merely listen to one group and the Opposition [in Sri Lanka]. So they [the Opposition] are trying to get the support of other countries to create an ‘Arab Spring’ here. That won’t happen in Sri Lanka.”

Asked whether he would hold the Northern provincial elections in September, as he had told this newspaper, Mr. Rajapaksa said: “Yes, we will hold [the poll] in September. That’s why we have postponed the other [provincial] elections too. I did not want to face the criticism that I was doing it only because I had no intention of holding the Northern provincial elections.” The North would have powers which are “not more, not less” than those enjoyed by the eight other provinces.

On the coming U.S.-sponsored resolution at the United Nations Human Rights Council (UNHRC), Mr. Rajapaksa said Jaffna was provided with all infrastructure just three years after the war ended. “Who did this within three years? Anybody who has come and seen it has talked about it positively and has commended us.”

Even India was “harassed” by the UNHRC over Kashmir, he said. “Sri Lanka is like a volley ball. Everyone is taking turns punching it to cover up their sins.”

On the issue of a political solution for the Tamil people, he said that unless the Tamil National Alliance (TNA), an umbrella group of Tamil parties, joined the Parliamentary Select Committee, there could be no way forward. “Without TNA [on the committee], I will not be able to do anything… Earlier, all the leaders gave their solutions from the top. It has failed. The 13th Amendment has failed. Everything has failed,” he said.

Mr. Rajapaksa allayed fears that MPs of the majority community would hijack the agenda, pointing out that some individuals and parties in the government would not allow it to happen.

The President said he had not discussed with India its support to Sri Lanka at the UNHRC. “India must know its duty, as a neighbour…, as a friend of Sri Lanka. I can’t dictate to India.”

Referring to External Affairs Minister Salman Kurshid’s comments in Parliament on accountability for alleged human rights violations in Sri Lanka, he insisted that Sri Lanka had held people accountable for excesses. “We have filed cases… We have handed down punishments. But this can be done only as per the laws of this country…I have released 14,000 [LTTE] prisoners, who had serious charges against them like murder, after a process of rehabilitation. Had I filed cases against the 14,000 people, what would have happened? I am a Buddhist. We have tolerance and compassion. There are still some more people [of the LTTE] in prison. We are examining ways…to release them.”