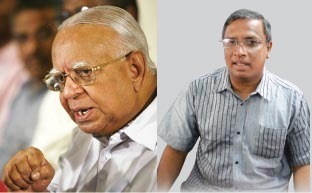 Ironical but true. Even as the rest of the world is supposedly fighting the case of the Tamils in Sri Lanka, the Tamil National Alliance (TNA), the premier political outfit of the community, is busy fighting with itself. Or, so it seems. With the ‘ethnic issue’ and all its manifestations taken out of their hands, the TNA, now it seems, has nothing else to do than revert to the periodic internal demands for registering itself as a separate political party with the nation’s Election Commission.

According to Tamil media reports in Sri Lanka, it is once again about the post-war demand of the four non-ITAK constituents for a submerged identity in the TNA. However, the ITAK, or the ‘Illankai Tamil Arasu Kachchi’ – controversially translated as the ‘Federal Party’ in English by its founder, the late S. J. V. Chelvanayagam and followed by the rest – would have none of it. The party, whose election symbol, ‘House’, the TNA has adopted, would not want its dominant position compromised or diluted in anyway, either at the leadership or the cadre levels, now or ever.

This has consequences for Tamil politics in the country, as the non-ITAK components are more vociferous, particularly outside the country. The Sri Lankan Tamil Diaspora has elements that are more aligned to the LTTE’s philosophy and methodology than the ‘Gandhian ways’ of the ITAK. Translated, the one-time militant, non-ITAK partners in the TNA speak – and comprehend – this kind of Diaspora talk more than the moderates in the party and the community. The numbers are contestable, but when the chips are down, the chances are that the moderates would give way. Or, so has been the experience – hence, the perception, too.

The TNA’s discomfiture may have been god-sent for the Government, or so it seems. It is one voice less to counter as it tries to push the ghost of the LLRC Report out of the UNHRC in Geneva. It failed last year, and the odds are loaded even more heavily from the start, this time round. There is no India to blame, either, as the Indian position is more or less clear, if the new US resolution is to derive from Sri Lanka’s very own LLRC as it did the last time round.

Freedom from terrorism, not poverty

It is not the story that the ‘Sinhala nationalists’ would want to hear, back home. It is also not the story that the Government can spin around to its larger constituency in the country. For the former, the ‘war victory’ has to be followed by ‘diplomatic victories’ at every turn, every time. For the latter, the ‘war victory’ is already in the past. They have got freedom from LTTE terrorism. It has come to stay. They now want freedom from poverty. It is poverty that has come to stay – not freedom.

It is in this context that the Government leadership of President Mahinda Rajapaksa has to view the emerging alliance between the traditional UNP adversary from within the larger Sinhala polity, the TNA and a host of other parties, who however do not add much by way of vote-share. For now, the Government can still breathe easy on the Geneva front, as it has nothing much or more to lose. On the home-front, too, similar is the case. Demoralised as it has been for long, and divided as it is even more than the TNA partner, the UNP has nothing to offer by way of electoral challenge to the ruling SLFP-UPFA of President Rajapaksa.

Given the curious way that electoral politics in Sri Lanka has played out in the past, more than the Opposition winning the election battle, the ruling dispensation has often lost the same to ‘anti-incumbency’. It is a ‘waiting game’ in which the Opposition – party or leader – should be there when the people are ready to vote out the Government of the day. That should also explain why the UNP is keeping itself dormant but alive. It is also why former Prime Minister Ranil Wickremesinghe, a presidential hopeful who lost the race to Candidate Rajapaksa in 2005, is seen and heard sparingly. It is a political lesson that the soldier in Sarath Fonseka did not understand – and appreciate – in 2010, post-war.

What the TNA is thus playing within is a past-time that in the past has divided the community on sub-ethnic lines, based on religion and caste, elitism and egalitarianism. It is no different in the majority Sinhala-Buddhist community, but the former cannot afford the luxury that they are wont to take. That is one area that Prabhakaran failed to curb with an iron hand, not that he did not try. The inherent limitations imposed on his very leadership could not let him proceed beyond a point.

The impossibility of the LTTE even to think in terms of returning to Jaffna town after being forced out by the armed forces in the mid-nineties is not only a story of comparative men, material and methods – or, the LTTE’s concerns about the safety and security of the civilian Tamils in what is dubbed the ‘cultural capital’ of the community. In the present context, some affected stake-holders see the existing divisions within the TNA that they want cemented one way or the other, as one between ex-militants and eternal – whom they dub ‘existential – moderates. A return this to the forgotten days, pre-war.

Internal to International, and back

The Sri Lankan State may have cause for concern over this one thing – now, and ever. Independent of the politicised arguments based on ethno-nationalism of the Sinhala-Buddhist variety, the security concerns of the State are real, as different from the electoral considerations of the political class – in power or outside. These concerns however belong to another era – particularly in their conceptualisation, expression and provisions for averting the same. In the ‘IT era’, weapons alone are not computerised. Thought-processes, too, are.  So are processes and products of dissemination.

The Government’s inability to interpret it correctly in the months and years after the war has meant that what was essentially an internal problem has now emerged as an international concern. The TNA and the rest of the Tamil polity and the society have little or no role in it. Or, so it seems. After a point, even the Sri Lankan Tamil Diaspora is becoming increasingly irrelevant to the global scheme. It may be good for them to feel that they are the ones calling the shots – which illusion the Sri Lankan Tamil polity, including the TNA, does not seem to have any more – and that the world is at their beck and call, and that the international messengers of bad tiding, like the Amnesty International (AI) and the Human Rights Watch (HRW) do their bidding.

The reverse may be the truth already, in the case of Sri Lanka, too. If human rights violations are the mandated concern of conscience the world over, INGOs should have been looking inwards and displaying the same vigour in matters of responsibility, accountability and R2P, or ‘right to protect’. Afghanistan may have been an ‘R2P’ case already, but who is going to protect the people there next year on, and who is going to be held responsible for that? This does not mean that ‘war crimes’ and ‘accountability issues’ in Sri Lanka should not be addressed, and sorted out for good.

It is one thing to make pulpit speeches of the kind. It is another to live with the reality. The Sri Lankan Government having lost the initiative on permanent peace, post-war, also seems to have lost it in the international arena. After all, the UNHRC resolution at Geneva this time last year did not wait for its reservations and explanations, concerns and commitments. Sri Lanka was not even a voting-member last time. It is not one this time, too. The nation went through motions of protesting, as much loudly world-wide as it had been used to do nearer home over the past decades.

In nations of the world where Sri Lanka was not a local concern in anyway, the Government made it one, trying to convince the Governments there to vote against the US motion. Sri Lanka lost the vote, but the memories of its campaign would remain in the minds of the Governments that its competent campaigners visited. With a few exceptions, it was all a cut-and-dry calculation, based not on the concerns and commitments of the affected State but and the pulls and pressures that unconnected third parties had on local Governments – for or against the US-sponsored motion. It would have been the case, whoever ruled Sri Lanka, or whichever other country that was in Sri Lanka’s place.

In the final calculation, Sri Lanka did not matter to the rest of the world. It matters only to the Sri Lankans and that too people who have chosen to stay behind as Sri Lankans. This is more so in the case of the Sri Lankan Tamils, but in the decades to come, independent of the ethnic issue that is now raging in the international arena, the Sinhalese and the Muslims too would be joining the ranks in whichever nation that still needed skills in large numbers, but who would leave their home-land politics in the home-land itself. Children of all those toiling as housemaids and factory floor assistants in the Gulf and Europe would have qualified for a transition to a new world, to begin a new beginning.

The time is still not too late for the Sri Lankan State to revisit its existing concerns, contextualising them to the emerging realities of global politics and geo-politics, as different from the accompanying geo-strategy. It is not too late either for the Government to revisit its own position on a meaningful political solution to the ethnic issue, involving power-devolution of a substantial kind – which is what the Tamils wanted, post-war, and which is what the TNA was willing to negotiate, too.

Internationalising the ethnic issue the way it has been done has its own limitations. The Tamils are bound to learn it, sooner than later. That is when they would revert back to Sri Lanka, but in ways that the Government may have thought does not exist anymore. The current campaign at the global-level would have helped ensure as much, if nothing more. It is something that the Sri Lankan Government can stall here and now – rather than waiting it out now, and warning about the future.

(The writer is the Director of the Chennai Chapter of the Observer Research Foundation, the multi-disciplinary Indian public-policy think-tank, headquartered in New Delhi. email: [email protected])