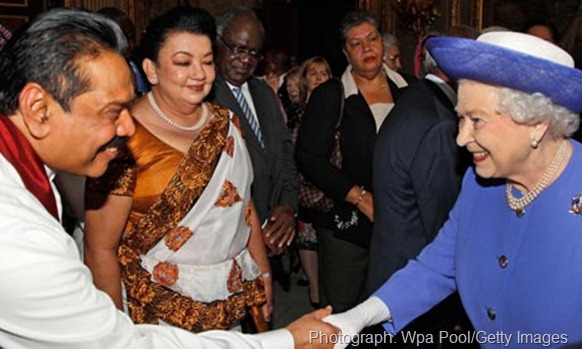 In early 2009, as foreign secretary, I travelled to Sri Lanka with Bernard Kouchner, the French foreign minister, so that we could see for ourselves the situation at the end of the brutal 26-year civil war. We met the president and his ministers in Colombo, and then travelled to refugee camps further north. I will never forget what I saw, and in particular the pleading of Tamil women carrying slips of paper with the names of their husbands and sons who had been taken away for "screening".

The last phase of the government offensive involved squeezing anything up to 330,000 people into the Vanni region, south of the Jaffna peninsula. A report in March 2011 by a special UN panel laid bare the scale of human suffering. Tens of thousands had been killed by government shelling, which had targeted no-fire zones, UN food distribution lines and hospitals. The report also detailed appalling behaviour by the LTTE, the "Tamil Tigers", alleging that civilians were prevented from escaping and used as hostages. The UN report found credible allegations of serious violations of international law by the Sri Lanka government and the LTTE, including war crimes and crimes against humanity.

An internal UN review reported last November that the government obstructed the provision of aid and assistance to civilians, did not protect humanitarian workers, and was largely to blame for the shelling of heavily populated areas and the deaths of civilians. And a further report last month, by the United Nations high commissioner for human rights, criticises the progress made on accountability and reconciliation and, significantly, the commissioner, Navi Pillay, reaffirmed her "long-standing call for an independent and credible international investigation" into alleged human rights violations "which could also monitor any domestic accountability process".

A film, No Fire Zone, using personal testimony from civilians caught up in the latter stages of the conflict, is putting the Sri Lankan government on the spot. And this month Sri Lanka is being called to account in the UN human rights council by the United States.

The Commonwealth heads of government meeting (Chogm) is due to take place in Sri Lanka in the autumn. Canada, which is Conservative-led, has robustly called for the meeting – which the Queen would normally open – to be moved from the country. The Labour government took this course when we were planning for the 2011 meeting. It is time for the British government, which has trumpeted its priority of making the Commonwealth a model of good governance and democratic values, to make its voice heard.

The insistence on justice and accountability is not legalistic nitpicking. It’s about the message that is sent to those who violate human rights. Just think about the insouciance of President Assad and his supporters.

Nor are concerns about the actions of the Sri Lanka government merely historic. The leading opposition candidate in the 2010 presidential election was jailed soon afterwards. The chief justice of Sri Lanka has been impeached and dismissed, neutering the independence of the judiciary. The president has reneged on his pledge to expand local autonomy – a key element in post-war reconciliation.

Faraz Shaukelty, a Sri Lankan/British journalist who writes for the outspoken Sunday Leader newspaper, was shot in the neck by three gunmen last month. Human Rights Watch says that several thousand people are locked up without charge, and that state-sponsored abuse of Tamil activists is widespread. Other UN investigations record over 5,000 outstanding cases of enforced and involuntary disappearances; and nearly 100,000 internally displaced people remain without proper protection. This is not the path of reconciliation promised by the Government after the civil war.