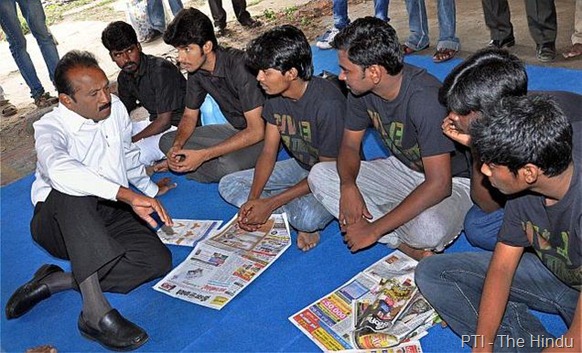 In a late night swoop, police removed eight students of Chennai’s Loyola College, who were on a fast-unto-death on the Sri Lankan Tamils issue and admitted them to a hospital, police sources said.

The move came amidst growing support for them from various political parties, including the DMK and BJP, and three days after the students embarked on the fast pressing for various demands including an independent probe against Colombo for alleged war crimes. .

Scores of supporters, who were present at the venue were, also taken into custody and the premises of the fast sealed by police, drawing criticism from MDMK founder Vaiko and others. Viako said his party Deputy General Secretary Mallai Satya, and many others including some Tamil cinema directors were detained.

Vaiko was one of the first leaders to meet the students and not only encourage them for their effort but also extended his support.

Earlier, DMK chief M Karunanidhi had exhorted the students to withdraw their fast, saying youth’s lives were important and asked them to resort to other forms of democratic means of protest.BJP too had extended its support to the students.

The ruling AIADMK and other parties had criticised Colombo on this issue amidst calls for India’s support for a UN HUman Rights Commission resolution moved by the US, from key UPA ally DMK.