Gajendrakumar Ponnambalam, the president of Tamil National Peoples’ Front (TNPF), who addressed the UPR Review session in Geneva on Friday, has called for an internationally supervised transitional administration of the Tamil homeland in the North and East of the island of Sri Lanka. Noting that the genuine grievances and aspirations of Eezham Tamils are reduced to “mere individual human rights problems” rather than the “destruction of their Nation”, Mr. Gajendrakumar, who represented the NGO, International Education Development (IED), at the UN forum called for independent international investigation on Sri Lanka. In a carefully drafted statement, he further said that the UPR is “de-Tamilized” to the point that, anyone not fully cognizant of the facts of the 65 year long Tamil-Sinhala conflict would not even know who is to be a party to “reconciliation.” 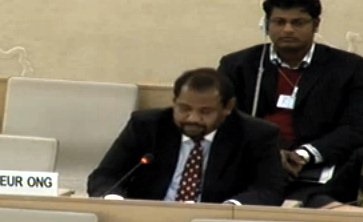 Following is the full text of the presentation made by Gajendrakumar Ponnambalam at the UPR Review at Geneva on Friday, under item 6, General Debate, 39th Meeting 22nd Regular Session Human Rights Council:

International Educational Development has followed the progress of the UPR since its inception. Now, in its second cycle we note a decided failure of some States to implement the recommendations of the first review – as is glaringly apparent in the second review of Sri Lanka.

The review of Sri Lanka also demonstrates the paucity of opportunities for a people, such as the Tamil people, who identify as a collective political entity – that is as a Nation – based on historical independence, ethnicity, language and customs to be heard and taken into account. Their genuine grievances and aspirations are reduced to mere individual human rights problems rather than the destruction of their Nation. Sadly, except for one statement made by Austria concerning the rape of Tamil women, the Tamils as a people are not even named—the UPR is “de-Tamilized” to the point that, anyone not fully cognizant of the facts of the 65 year long Tamil-Sinhala conflict would not even know who is to be a party to “reconciliation.”

Indeed it was the systematic dismantling of the existence of the Tamils as a distinct Nation in Sri Lanka that led to the 26-year-long war. We are alarmed with the government’s assertion that it aims to create “a true Sri Lankan identity,” which in Sri Lanka is a code term for “a Sinhala Buddhist State.”

At this juncture, we call for the establishment of a transitional administration, under international supervision, in the North and East of Sri Lanka – the traditional homeland of the Tamils – as an urgent measure to stop the on-going destruction of the Tamil people.

Finally, taking note that the Government rejects all recommendations most likely to bring about accountability and remedy as required by international humanitarian law, we urge an independent international investigation.