Hundreds of Eezham Tamils gathered in front of the US Embassy in London on Friday evening, burnt the copy of the US resolution tabled at the UNHRC session in Geneva and the copy of the LLRC recommendations of Sri Lanka, based on which the USA has tabled the resolution. All the speakers at the protest welcomed the student uprising in Tamil Nadu opposing the US designs as an inspiration to global Tamils in continuing the struggle of Eezham Tamils. Viewing the US resolution as one that is facilitating the agenda of the genocidal State and regime of Sri Lanka in the annihilation of the nation of Eezham Tamils, the demonstrators demanded protection and solutions based on identity, territoriality and sovereignty of Eezham Tamils as a nation in the island. The protestors who gathered at a short notice braved rains and detractors pinning hopes on the USA. 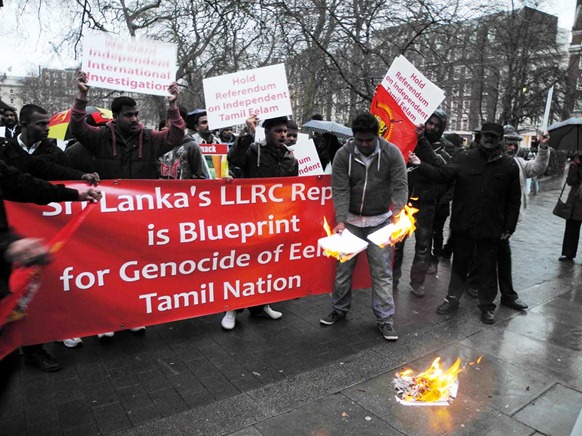 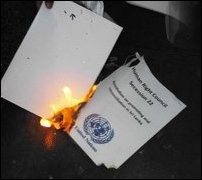 Speaking at the demonstration, senior writer and columnist, Mr. Ithayachandran said that youth upsurge of such a scale in Tamil Nadu for the cause of Eezham Tamils takes place nearly after four decades. The youth would have risen up in 2009, but Mr. Karunanidhi sabotaged it, he said. 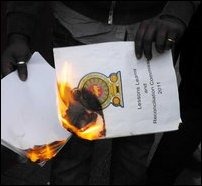 Youth activist Sasithar Maheswaran, a democratically elected representative of Eezham Tamils in London, who has been articulating the perspectives of the second generation Tamil youth at various forums, told reporters that the LLRC report produced by Sri Lanka “actually outlines way in which the genocide can be completed – one of which was to ensure that no part of the island to be claimed by the Eezham Tamil Nation”.

He pointed out that the genocidal land grab, carried out by the Sri Lankan state for the past 65 years has been accelerated within the past 18 months.

The Geneva process, taking up the resolution, brings Sri Lanka to the table, but nonetheless the resolution itself, by promoting the LLRC recommendations is actually an act calling for the completion of the genocide of the Eezham Tamil Nation, Sasithar said adding that this is going to be UN seal of approval for the genocide of the Eezham Tamil Nation, being carried out by the Sri Lankan state.

“This time, it seems like Tamil Nadu students are determined to cause an attitudinal change,” said TU Senan, a leftist activist representing the Tamil Solidarity campaign group in UK. “This is a big inspiration. This struggle should be taken forward. There will be attempts to sabotage such uprisings, as it happened back in 2009 in Tamil Nadu. So, the students should plan carefully how they are going to take it forward overcoming the attempts to sabotage the trend,” he said.

The Tamil Nadu students have our 100% support, said Ms Bharathy of the TYO-UK

“We will stand shoulder-to-shoulder with Tamil Nadu students because they are giving voice for our struggle and it is inspiring to see all the students joining hands together for our cause,” she said.

“We don’t support any resolution, such as the US-LLRC resolution, because it does not recognise the sovereignty of Tamil people. We came down here to send this message across,” Ms Bharathy further said.

Another student activist of the TYO-UK, Ms. Suganthy, coming hard on the LLRC-based resolution as a genocide-facilitation, said, “We are very much inspired by the protest and the hunger strike taken up by the Tamil Nadu students […] We will stand with the students in Tamil Nadu.”

According to Mr. Kandiah Rajamanoharan, a social activist and a representative of the TCC-UK, making the culprit the judge and giving time to the Sri Lankan state to complete the genocide, is what the USA is doing year after year in Geneva.

All the countries of the International Community know in their heart that what is taking place in the island is genocide. But, instead of giving time to the SL State to complete the genocide, they should recognise the fact as it is and come forward to support the Tamil struggle towards the independence of Tamil Eelam, which only will be the practical and just solution to end the misery of Tamil people in the island,” he further said.

When contacted by TamilNet, sections of Eezham Tamil Leftists in London said that many of them were not aware of the protest as the call for the protest was on a very low key.

Had it been circulated widely there would have been a mammoth crowd of like-minded Tamils who had been dormant with simmering feelings, the Tamil Left circles said, adding that organisers of such trend-setting protests should not depend on conventional elements and outfits, but should reach out to the alternative ones.

Attitudinal changes will not come by meekly compromising with fundamentally dangerous processes, arguing that there is at least something in them or by talking to diplomats who are bound by positions taken by the Establishments. People showing their power with consistent uprising at the right time could only force attitudinal changes in the Establishments, the Tamil Left circles further said.

Speaking at the demonstration, youth activist Mr. Sivanthan, who had walked across Europe raising awareness and who had been on a campaign recently in a caravan vehicle to Geneva, said that the London protest in front of the US Embassy amidst opposition from the detractors, is only a beginning and it should take momentum in the diaspora in the coming days, months and years.

He urged the world Tamils, especially the youth, to get the inspiration from the students of Tamil Nadu in taking the message across the world, in addition to showing solidarity with them.

“Of all the demands, what inspired me a lot was the way they exposed the LLRC-based resolution that is being tabled for the second time by the USA in Geneva,” Sivanthan said adding that he fully supports the 9-point demand put forth by the intelligent students in Tamil Nadu.

Do not give up, it is a sharp demand and is a just demand. It has clearly identified that what USA seeks is only regime change and not resolving our problems, Sivanthan further said. 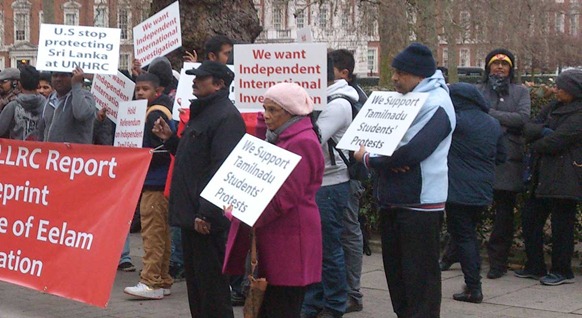