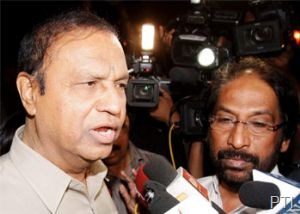 DMK MP Vasanthi Stanley on Wednesday fainted in the Rajya Sabha while strongly raising the Sri Lankan Tamil issue, leading to a chaotic situation in the House.

Renuka Chowdhary, who was in the Chair, immediately adjourned the House till 2pm and called in doctors to attend to Stanley, who lay unconscious on the floor.

The DMK member was immediately rushed to Safdarjung Hospital after two doctors attended to her in the House.

A stretcher as well as a wheel chair was also brought in but Stanley preferred to walk with support of members including party leader in the House Tiruchi Siva.

Members from the ruling party including Ambika Soni, D Purandeshwari, Rajeev Shukla as well as those from AIADMK and other parties rushed to help the sick member.

As the House re-assembled, members from DMK and AIADMK trooped into the Well shouting slogans protesting atrocities on Tamils in Sri Lanka and the killing of Prabhakaran’s son.

All the while, SP members led by Naresh Agarwal sought Verma’s dismissal. In the meantime, Stanley fell unconscious triggering a chaotic situation. After adjourning the House, Chowdhary left her seat and went to the Well to ask Stanley as to how she was feeling. "Did you have your breakfast, madam?" she asked.