Several hundreds of thousands people across Tamil Nadu took to streets on Wednesday in a students-led demonstration unprecedented in recent decades in Tamil Nadu, denouncing the US-tabled empty resolution further diluted by New Delhi at Geneva, and demanding international investigations and plebiscite on the question of Eezham Tamils. Peaceful demonstrations took place at every part of Tamil Nadu, including all the major cities. Conservative estimates put the total number of participants, mostly students, at a million. The positions taken by Washington and New Delhi, the leading architects and abetters to the genocidal war in the island, in bringing out a deceptive resolution at Geneva have contributed immensely to the confirmed awareness among the people of Tamil Nadu that Tamil Eelam is the only solution to the genocide-affected Eezham Tamils, political observers in Chennai commented. 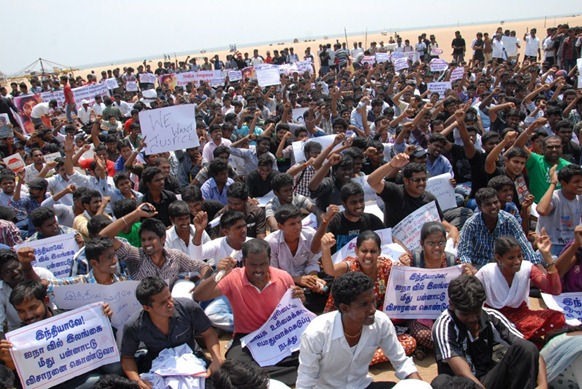 Protest at Marina Beach in Chennai

The Student Federation for the Liberation of Tamil Eelam, a spontaneously formed movement of students called for the demonstration on Wednesday. In its formation the movement found inspiration from the people’s struggle against the Koodangku’lam Nuclear Power Plant that started at a village called Idintha-karai in Tamil Nadu.

Even on Wednesday, all the school children of Indinthakarai village came together in an emotional rally carrying in their chests the photos of the slain 12-year-old Balachandran Pirapaharan. 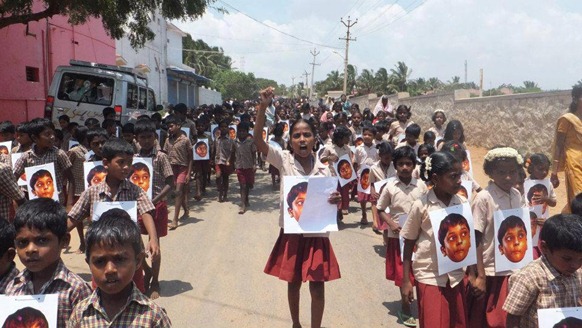 School children at a demonstration rally at Idintha-karai

Female students took active part in the civil disobedience protests held in all the cities, towns, villages and schools.

The organizers said the protest was a big success in unequivocally giving articulation to the Tamil struggle for justice. 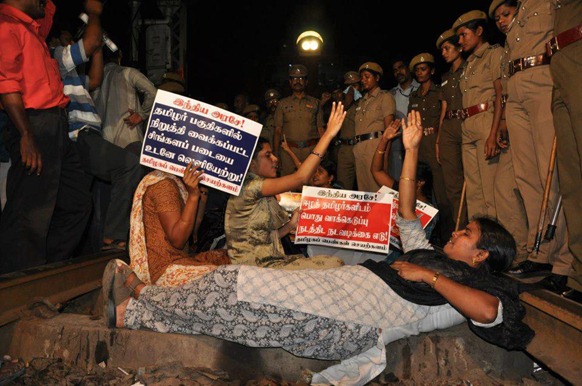 Mr Rajmohan, a doctoral student at the Indian Institute of Technology (IIT), when contacted by TamilNet said that the protesting students across the State had unanimously sent a clear message on the uselessness of the resolution proposed by the USA, as it failed to address the genocide faced by Eezham Tamils and as it skipped calling for international investigations on Sri Lanka.

The student movement was demanding a UN plebiscite, he said, adding that majority of students from other states in the IIT too was in solidarity with the student community in Tamil Nadu.

At several places students were seen fasting en bloc, numbering at least around 500 on each instance.

People from other walks of life also took part in the protest.

More than 2,000 software engineers formed a human chain in front of Tidal Park at Chennai. 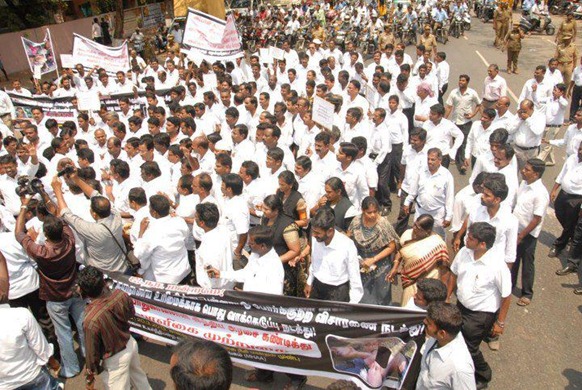 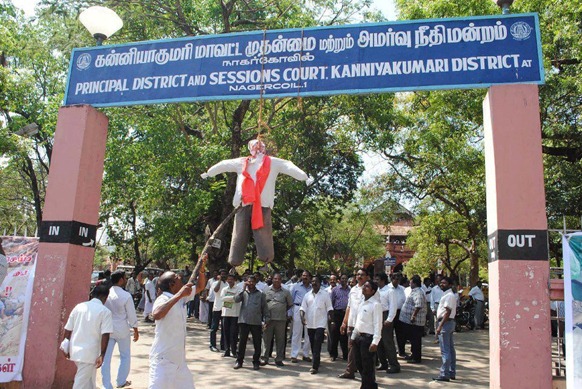 On Tuesday, Tamil Youth Front carried a bier having the US resolution from Loyola College and ceremonially cremated it at the nearby cremation ground. Biers for the US resolution were also taken at Hosoor bordering Karnataka and at Chithamparam in the South Arcot district.

On Wednesday, Students, confronted by the Police, were also seen blocking the trains. The Railways, Post offices and Income Tax offices that come under the Central Government were also besieged.

Although the protests drew massive participation, they were largely peaceful and didn’t disturb the traffic, police sources said. 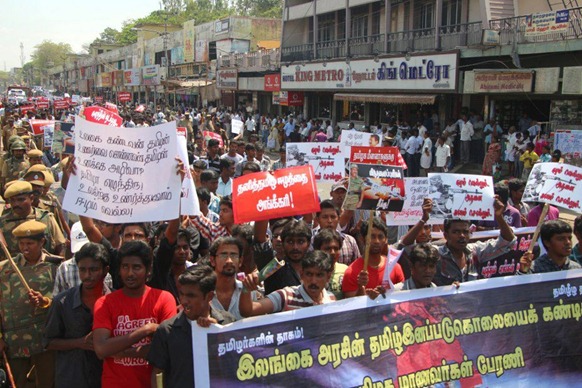 Madurai, the second largest city in Tamil Nadu, was brought to a standstill on Wednesday. On Tuesday, Coimbatore witnessed the same situation, as 10,000 students had stormed the city.

On Wednesday, 10,000 students took part in the protest in Thanjavur.

The students received solidarity from their families and the people from all walks of life. At Vellore, auto drivers gave free transport to the students participating in the protests.

Law students mobilized in extending support to students at other schools offering legal help to challenge the administrations or owners of the colleges when some schools attempted to forbid participation in the protests.

At New Delhi, a row erupted at both the houses of the Indian Parliament on Wednesday, as the AIADMK, DMK and CPI demanded immediate amendment to the US resolution to be submitted by the Government of India.

However, the New Delhi Establishment, confronted by the demands for a resolution in the Indian Parliament on Tamil genocide and international investigations on Sri Lanka, manoeuvred to secure the support of North Indian parties, even from its opposition, in countering the demand of the Tamil Nadu parties.

Unconfirmed reports also said that Trinamool Congress and its leader Mamata Banerjee was backing the GoI in whatever decision it takes. The Deccan Herald cited party sources as saying that Ms Banerjee wanted to keep the ‘political issues’ separated from the ‘national issues’.

Deccan Herald on Wednesday cited the DMK Chief Mr Karunanidhi saying that the US-proposed resolution at the UNHRC had been “already amended four times and it had been substantially diluted.”

“There were no strong words of censure against Sri Lanka in that resolution, which indicated that there was no scope at all to incorporate amendments suggested by the DMK like including the word ‘genocide’ in the draft among others,” Karunanidhi has said, justifying DMK’s decision to pull out from the Centre.

While all those who have gone through the latest draft of the US resolution was blaming New Delhi for further dilution of the already empty resolution, The Economic Times of India on Wednesday was citing New Delhi’s Finance Minister Mr P. Chidambaram saying that India would make the resolution strong with a resolute message.

Mr Chidambaram was on record in painting a deceptive picture a couple of days before the final carnage at Mu’l’livaaykkaal in May 2009. In recent times, The Economic Times was also found buttressing the genocidal State and regime in Colombo.

Chidamparam on Wednesday tried to diffuse the situation by proposing to bring out a resolution on Sri Lanka in the Indian parliament. But most of the political parties didn’t favour the move. Many of them viewed it as an issue between the Congress and the DMK and didn’t want the parliament to get involved.

A parliamentary resolution of no practical effect is a further hoodwink when they could not come out with a just resolution at Geneva, political observers in Chennai said.

Meanwhile, the ground realities in Tamil Nadu have forced even the Congress President Ms Sonia Gandhi to make a statement on Tuesday at her Parliamentary Party Meeting.

“We are anguished by reports of unspeakable atrocities on innocent civilians and children, especially during the last days of the conflict in 2009. That is why we demand an independent and credible inquiry into the violation of human rights in Sri Lanka," she was cited saying.

Ms Sonia Gandhi not recognizing the genocide and not calling for international investigation is not going to answer the nature of the upsurge in Tamil Nadu, political observers said.

At the height of the war, Sonia Gandhi’s daughter Priyanka Gandhi went on record saying human beings don’t forgive. But the question of forgiving or forgetting now doesn’t involve individuals but a nation and a civilisation, the observers further commented. 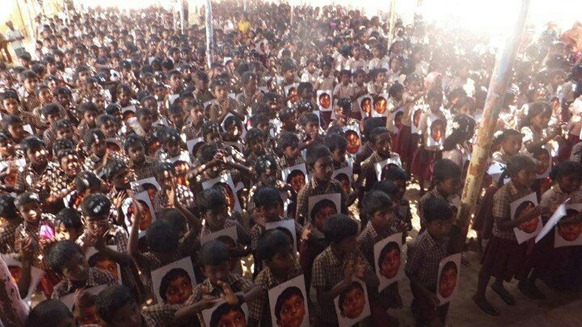 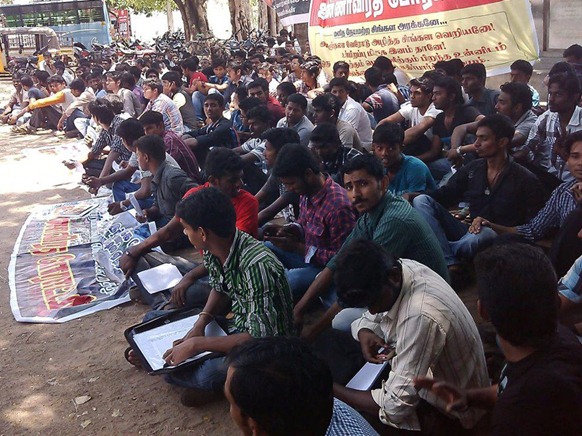 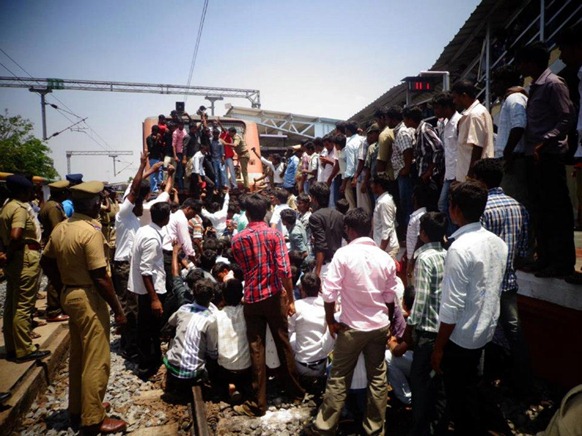 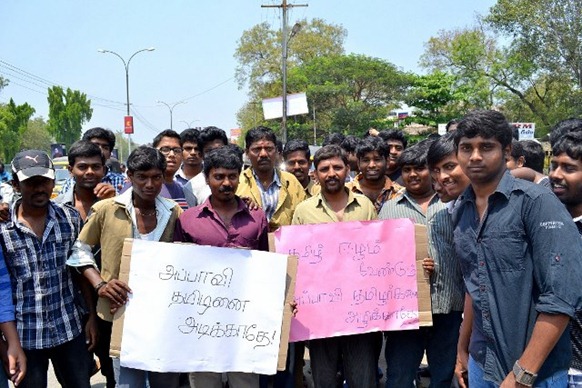 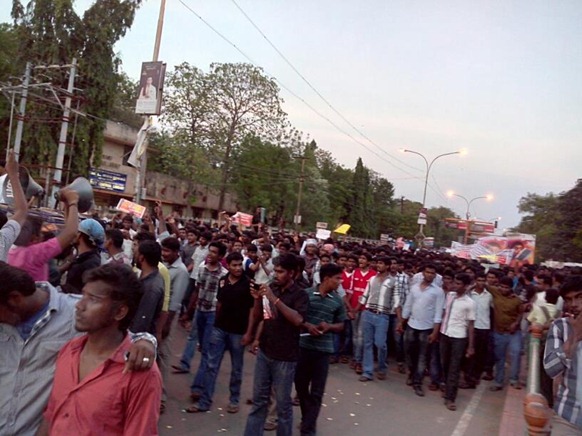 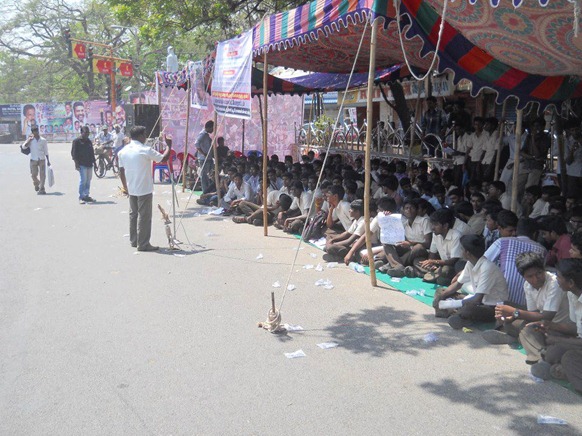 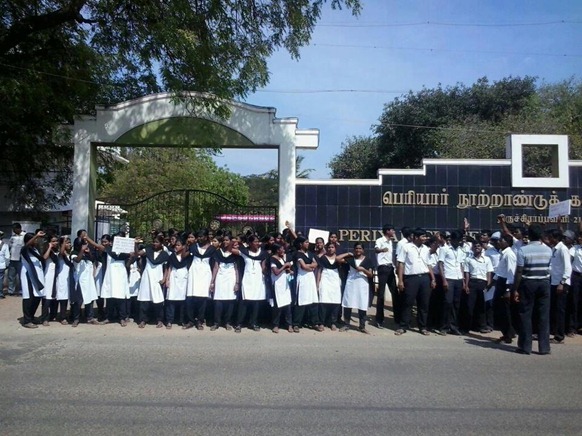 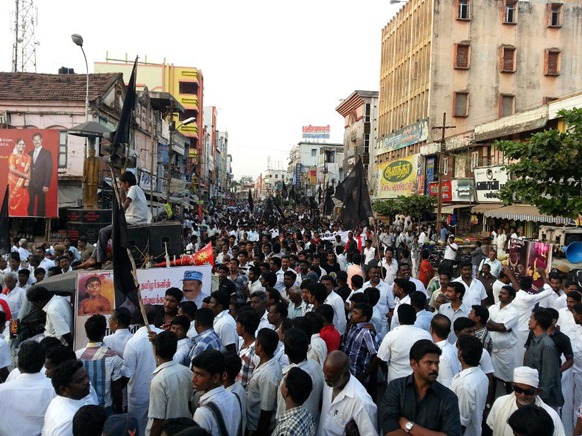 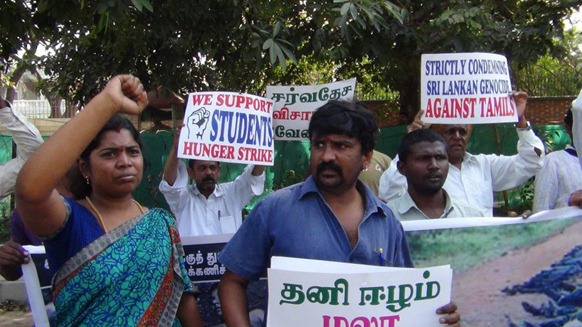 Protest in New Delhi in front of the SL High Commission 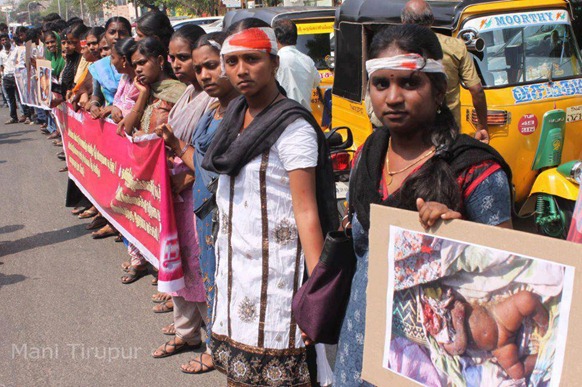