In a demonstration of solidarity with the demands of the Tamil Nadu students’ uprising, Eezham Tamil diaspora youth across several western countries have come out in protest against the pro-LLRC US resolution tabled at Geneva and pushing for a just political solution for the Eezham Tamil nation facing genocidal oppression in its occupied homeland. The protestors were unanimous in rejecting any resolution that binds the Eezham Tamil nation to unitary Sri Lanka. A copy of the US resolution was also burnt in Toronto, where solidarity groups had also participated in protests. While student protests occurred in London, Berlin, Dusseldorf, Toronto, Copenhagen and Oslo on Wednesday, further protests are scheduled in the coming days in major cities in western countries. 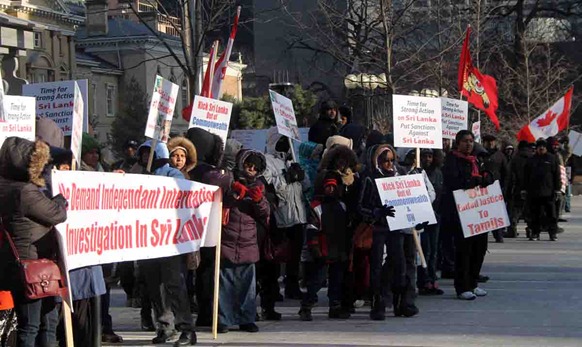 Eezham Tamil youth in Copenhagen, Denmark took out a massive rally from the Indian Embassy to the Denmark parliament via the American Embassy. However, the police prevented the protestors from demonstrating outside the US embassy.

The protestors raised slogans against the US for bringing a hollow resolution and to India to bring a stronger resolution to bring justice to the Eezham Tamil nation.

Eezham Tamil youth in Canada initiated a solidarity campaign to support the student uprising underway in Tamil Nadu. A community protest at the US Consulate in Toronto denouncing the LLRC-Based resolution saw the burning of the copy of the resolution by protesters

The York University Tamil Students’ Association initiated the first wave of hunger strikes expected to occur throughout University campuses in Canada according to the media release by the Canada TYO.

The protests in Toronto also saw the participation of activists from several solidarity groups.

"The massive student uprising in Tamil Nadu should be a clear sign to the international community that the national question for Tamils cannot be ignored. Calls for ‘reconciliation’ and a ‘united Sri Lanka’ are meaningless unless the legitimate national aspirations of the Tamil people are recognized. Otherwise, the so-called ‘peace process’ ends up preserving the status quo, and the Sri Lankan state’s protracted genocide of Tamils within the island," James Clark, Toronto Coalition to Stop the War, told TamilNet.

“The opinion of students is clear. We reject the LLRC-Based US Resolution. We reject any resolution that doesn’t recognize the Eezham Tamil nation that has faced genocide and whom are entitled to a state of their own. We stand in complete solidarity with the demands of the Tamil Nadu students,” stated Jessica Thyriar, President of the York Federation of Students, the central undergraduate students’ union representing over 55000 students at York University.

“It has been four years since the war has been declared over in the island of Sri Lanka yet the genocide of Tamils continues. It is unbelievable that the international community continues to present meaningless motions that help the Sri Lankan government complete its policy of structural genocide against the Tamil nation. Within the context of the international community repeatedly betraying Tamils, civil society worldwide should take note of the student uprising in Tamil Nadu and offer their complete solidarity to them and the Tamil nation.” Carolyn Hibbs, the President of the York University Graduate Students’ Association representing over 6000 students, told TamilNet.

Speaking to TamilNet, Priyanth Nallaratnam, spokesperson for TYO-Canada, said “Since 2009 the international community has based its approach on the domestic approach of the Sri Lankan government. Historically, time and time again the international community has failed the Tamil nation and it is time that they learn from their mistakes. In light of yet another failure of the IC to provide justice to the Eezham Tamils, it should be noted that any solution that is limited within the unitary state structure of Sri Lanka will not provide any meaningful solution to the Eezham Tamils.” 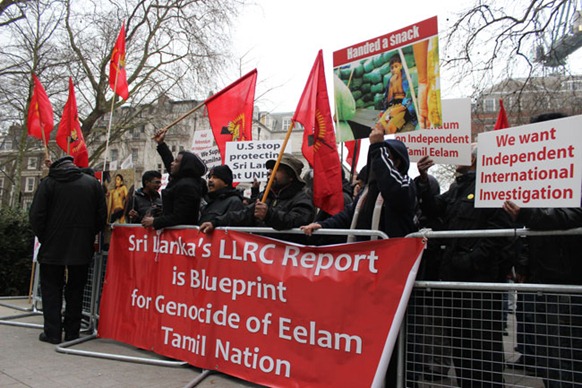 Protest organized by independent youth activists in front of the US Embassy in London was joined by hundreds of second generation Eezham Tamil youth.

This protest was executed successfully despite the attempts of certain pro-US sectarian groups to dissuade youngsters from participating.

Speaking to TamilNet from the site of the protest, Sathapalan Kanesalingam, an independent student activist at Westminster University and an organizer of the demonstration, opined that it is high time diaspora activists should realize that any resolution based on the LLRC will not be of any use to the Tamils.

PDF: Statement by TYO and student unions in Australia

“Over here, some people are of the opinion that the US resolution should be supported. But this resolution, both the first draft and the amended version, legitimizing LLRC, can provide no just solution to the Eezham Tamils. We cannot support it meekly this year and go to Geneva the next year and say that it didn’t work. It is against the interests of our nation, and it should be opposed now,” Mr. Kanesalingam said.

Sanju Ganesan of the TYO-UK was of the opinion that “Tamils have waited too long for the international community to take action and it is still failing to find us justice and this is evident through the pro-LLRC resolution that has been passed.”

Adding that the pro-LLRC resolution was supportive to a farce created by a genocidal state, she further said “We will not accept any form of move that compels us to find justice or a political solution within the mechanisms of unitary Sri Lanka. Tamil Eelam is the only solution. Therefore we stand is solidarity with students of Tamil Nadu and show our support. An independent international investigation into all crimes including genocide needs to be done. An independent UN referendum needs to be taken to facilitate the creation of our homeland Tamil Eelam.”

In a separate protest outside the Indian High Commission in London, three Tamil youth are entering the third day of their hunger-strike in solidarity with the demands of the hunger-strikers in Tamil Nadu.

In Oslo, Eezham Tamil youth are on hunger-strike outside the Norway parliament for Wednesday and Thursday.

Eezham Tamil youth in Germany demonstrated outside the Indian Embassy in Berlin and outside the North Rhine-Westphalia Parliament in Dusseldorf.

The protestors in Dusseldorf pinned the LLRC and the Sri Lankan constitution to a coffin to symbolically affirm the pointlessness of any solution within the unitary Sri Lankan state, protesters told TamilNet. 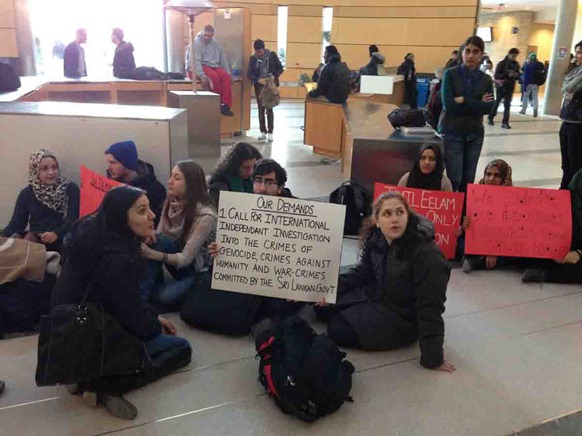 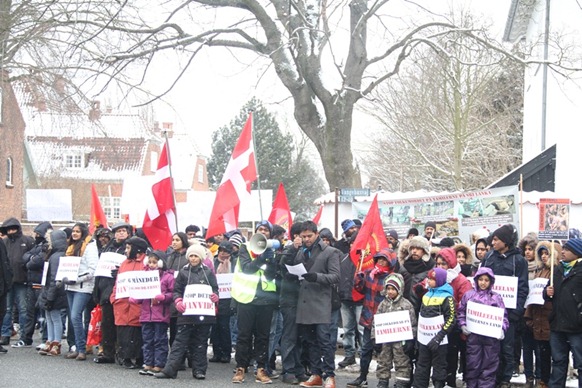 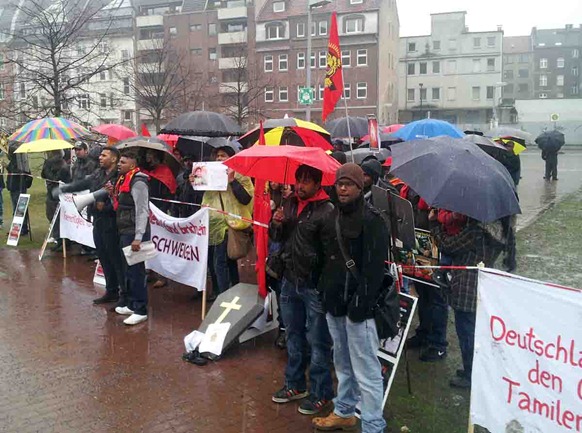 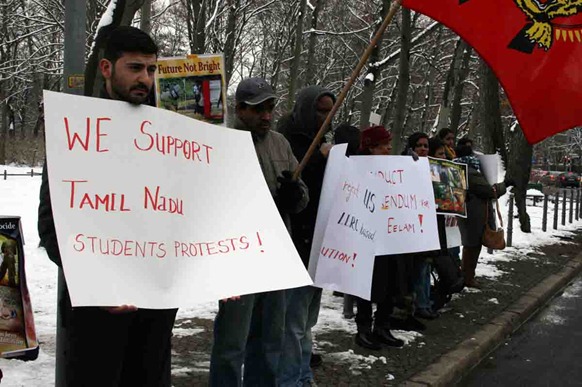