The 300,000-strong genocidal Sinhala military of Sri Lanka on Thursday took ‘pride’ in recruiting for the first time 95 Tamil girls for ‘office’ work and said that it is an evidence for the military not discriminating on ethnicity. Out of 150 Tamil girls who were originally forced to enter Sri Lanka’s military, 55 managed to escape. During the ‘training,’ around 20 driven to the stage of hysteria were admitted in hospital. The Tamil psychiatry doctor who came forward to their help himself was branded as mentally challenged. He is imprisoned and yet to be released. On the passing out parade day, four of the girls fainted, while their kith and kin were helplessly watching. Promises were made for one million rupees housing aid and 44 girls received Indian-made scooters, but parents complained that their daughters, held against their will, are not allowed to visit homes. 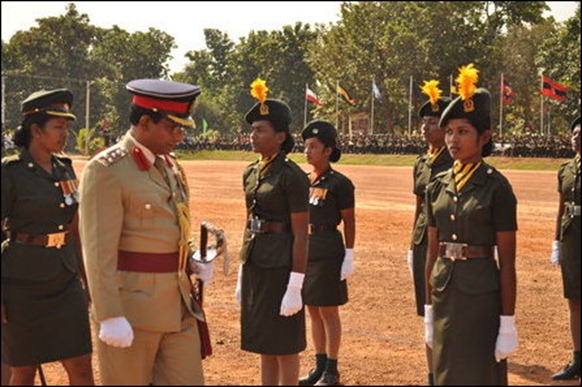 Tamil girls put on with SL military uniform after 3 months of lock-up. Those who wear black and yellow color are the new recruits

This is the ‘military reconciliation’ for the genocidal unity of the island that is groomed with tacit support or direct complicity of the USA, India, China, UK and several others, Tamil civil sources in the island said.

“Direct recruitment of Tamil women en bloc as woman soldiers to the Sri Lanka Army amply confirms the fact that the Army, contrary to allegations, made by some quarters, does not discriminate on ethnicity as such when it matters to recruitment of soldiers to the organization,” said Colombo’s military website on Friday.

In the 63-years history of the Sri Lanka Military, this is the first time it has recruited Tamil girls, the military website indirectly admitted the Sri Lanka military being Sinhala military.

A Sri Lanka Army (SLA) Brigadier, R. Ratnasingam, a Tamil, who is given the post as director of the Sports division of the SL military was posted by the occupying Sinhala military to receive the ‘passing out’ parade of the “First Batch of Tamil Female Soldiers” numbering 95. 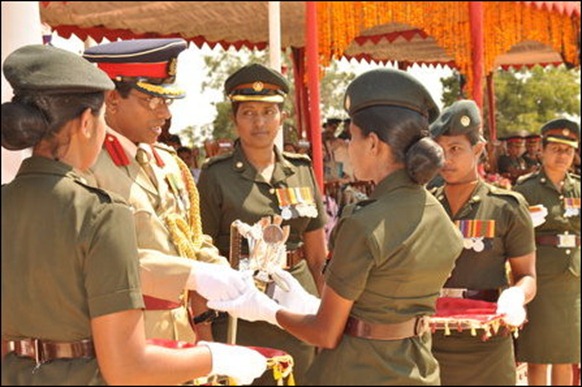 The parade was timed for the voting at Geneva on the LLRC-based resolution tabled by the USA and fine-tuned by India.

The 95 girls were locked up inside a military training camp and were paraded against their will in Ki’linohchi, sources in Vanni said.

Their parents complained that their daughters, who had been promised jobs, were put in military uniform for the training against their will.

There were alleged reports of harassments meted to them and 21 of the girls were admitted to the hospital in mentally affected state in December 2012. The SL military harassed Tamil politicians who voiced for the rights of the girls.

At the end of December 2012, a Tamil Medical Officer, Ratnasingham Sivashankar, who came to the help of a girl who had been refused access to her house after sitting for her exam, entered into a dispute with the military officials. He was ‘arrested’ by the SL military and was later imprisoned, under various charges alleged on him. The doctor who had specialized in Psychiatry and had voiced for the rights of the Tamil girls, is still under detention.

In the last three years the SL military is also engaged in giving obligatory military training to students recruited to the universities. Even though tagged as ‘leadership training’ what is forcefully delivered to the students at the SL military camps is training of military nature, university student circles said.

Apart from being a kind of psychological operation and ragging of the students by the SL military that is becoming the actual ruling, economic and commercial force in the island, the military may soon forcefully recruit the graduates too and the ‘training’ is to identify who should be recruited, the student circles further said.

Tamil students, both boys and girls, who are forced to go to the camps are harassed, beaten up and are robbed by the fellow Sinhala students.