The New US Secretary of State John Kerry, who assumed office on 1 Feb 2013, was the Chairman of the Committee on Foreign Relations in 2009 that brought out a report advising the USA to help Sri Lanka’s military without insisting on political solutions. Finding a clear link between the 2009 Kerry Report and Kerry’s State Department, US Professor of Law, Francis A Boyle said, "The callous and callow Kerry Report came right after the GOSL genocidal massacre of about 100,000 Tamils in Vanni, recommending that the United States government abandon all principles and instead aid and abet the continued GOSL repression and persecution of the Tamils. That is precisely the policy we now see in operation with Kerry as U.S. Secretary of State. This latest UNHRC Resolution sponsored by Kerry’s State Department and acting pursuant to his instructions proves it. Kerry should be fired," said Boyle.

The U.S. Secretary of State, John Kerry’s recent press statement which characterized the UNHRC Sri Lanka resolution as encouraging "the Government of Sri Lanka to continue on the path toward lasting peace and prosperity following decades of civil war and instability," and which expressed U.S.’s readiness "to continue engagement" with Colombo, and sidestepped accountability for the war-crimes committed by Sri Lanka, has alarmed Tamil activists, and raised the specter of a resumption of a passive US policy based on the 2009-Kerry report. This report was assailed by rights groups as "incredibly shoddy, ill-informed piece of work that grossly overstates the strategic importance of Sri Lanka to the U.S. and woefully understates the degree of abuses carried out by Colombo."

The December 2009 Report, "Sri Lanka: Recharting U.S. Strategy after the War," released by the Committee on Foreign Relations of which John Kerry was the chairman, recommended, inter alia: 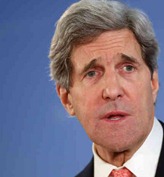 US should focus on economy and security of the island instead of humanitarian considerations, IDPs and civil society; should also invest in Sinhalese parts of the country instead of just focusing on North and East; should resume training of Sri Lankan military officials to ensure human rights in future operations as well as to build critical relationships and implied that US should not emphasize on political reform as a condition to assistance, bringing rift in US- Sri Lanka relations making the latter to align with countries of alternative model of development.

Diaspora circles commented after the release of the Kerry report that while pre-2006 US policy gave verbal precedence to political solution over military solution, and later provided support to a military solution, has now isolated the Tamil national struggle as a non-entity in U.S.’s geopolitical considerations.

Rights group slammed the contents of 2009 Kerry report. "Maybe the people who wrote the report don’t know anything about Sri Lanka or maybe they’re of the school that says that everything on the planet is strategic," said Brad Adams, Asia director for Human Rights Watch. "The huge human-rights and humanitarian problems that continue there are not small; they’re central to any principled diplomatic engagement with Sri Lanka at this point. So [the notion] that we are in a competition with China, which I think is driving this, is misplaced," Adams further said.

In this context, the Secretary of State Kerry’s statement on the UNHCR resolution has dismayed Tamil diaspora circles over the possible ominous policy evolution in a downward direction as regards Tamils’ future welfare, and on the possible adverse impact to the Tamil struggle seeking justice, accountability, and assertion of political and fundamental rights.