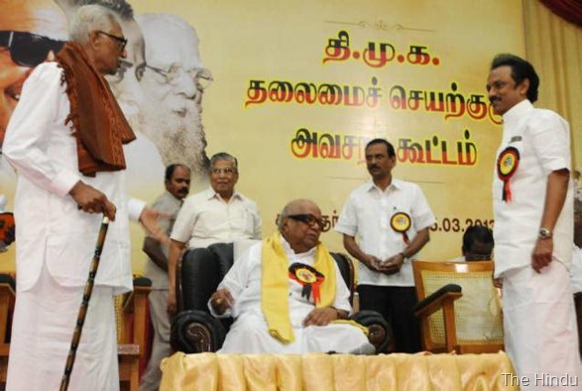 Joining her arch rival DMK on the Lankan Tamils issue, Tamil Nadu Chief Minister Jayalalithaa on Monday said that India should stay away from the Commonwealth Heads of Government Meeting (CHOGM) to be held in Colombo in November to mount pressure on Sri Lanka to ensure accountability under an international framework for its alleged war crimes.

Earlier in the day, the DMK, which quitted the UPA coalition on the Sri Lankan Tamils issue, had demanded that India should boycott the CHOGM.

“…Any high level participation or engagement from the Indian side in the CHOGM will not only embolden the Sri Lankan regime but also incense public opinion and sentiment in Tamil Nadu on this every sensitive issue even further”, she said in a strongly-worded letter to Prime Minister Manmohan Singh.

She cited reports that Canada was likely to boycott and the House of Commons Committee on Foreign Affairs in the U.K. had also urged the British Prime Minister not to attend.

Many important countries across the world, including two G-8 countries, propose to leverage the CHOGM and make substantial progress in human rights issue in Sri Lanka, she said.

“As an emerging great power and an aspirant for a permanent seat in the UN Security Council, India has a duty to ensure that the values of democracy and respect for human rights are upheld anywhere in the world and in particular in its neighbourhood”, the AIADMK chief said.

As a leader in South Asia, India was uniquely positioned to exert the maximum influence on the Sri Lankans to accept an independent international mechanism to hold those who committed “genocide and war crimes” to account, she said.

The proposed CHOGM was another “opportune occasion” for India to mount further pressure on Sri Lanka to ensure that accountability was established under an international framework for the “war crimes and genocide committed in the closing stages of the civil war and the ongoing gross human rights abuses,” she said.

Observing that there was still time to consider an alternative venue to hold the event and India should ask for it, Ms. Jayalalithaa said, “If India takes this diplomatic initiative, there is likely to be broad based support amongst member countries of the Commonwealth.”

Accusing India of voting in favour of a “diluted and weak” U.S. resolution against Sri Lanka and not moving any amendments at the UNHRC, she said, “There was widespread disappointment at this stand of the Government of India and a continuing sense of injustice in Tamil Nadu on this issue.”

“While Commonwealth Secretariat should not convene the meeting at Colombo, but if it happens, India should boycott the meeting in order to reflect the sentiments of Tamils worldover and to keep up the democratic spirits,” the DMK Executive Meeting said.

Chaired by party chief M. Karunanidhi, the meeting was attended by senior party leaders, but his son M.K. Alagiri, who is sulking on not being consulted over the party’s pull out of UPA, skipped it.

This is the first high level meeting of the party after it withdrew support to the UPA government last week charging that the Centre failed to bring amendments to the U.S.-sponsored resolution at the UNHRC against Sri Lanka for the alleged human rights violations during its crackdown on LTTE four years ago.

When some countries had decided against attending the Commonwealth meeting, “India without any hesitation should announce its decision about boycott immediately,” the party said in a resolution.

Defending its decision to snap ties with the UPA, DMK said it had provided stability to the Congress-led coalition from 2004 and solidly backed it in 2009.

“Kalaignar (Karunanidhi) and DMK deserve credit for providing stability and preventing the collapse of the government” when the Centre faced several critical situations on issues like FDI in retail and to keep the communal forces at bay, the resolution said.

Slamming the Centre on the Lankan Tamils issue, it said New Delhi continued to extend all assistance to Colombo terming it as a “friendly country” and insisted that India should bring a resolution on its own against Sri Lanka before the UNHRC.

Referring to the attack on Tamil Nadu fishermen allegedly by the Sri Lankan Navy, the DMK said despite its repeated pleas on the protection of fishermen, it seemed that the Centre has not taken any effective steps so far.

“The Centre should not delay further and take strong action to protect Tamil Nadu fishermen,” the resolution said.

The meeting passed as many as 16 resolutions.

In a resolution, the meeting urged the Centre to take steps to complete the Sethu Samudram project by defeating the designs of communal forces, which were trying to stall it.