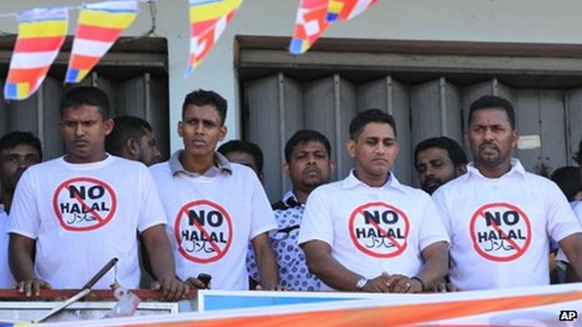 After a series of attacks on mosques, wild rumours about animal slaughter and an attempt to outlaw the halal system of classification, the BBC’s Charles Haviland investigates how Sri Lanka’s Muslim minority is being targeted by hardline Buddhists.

On a January morning a crowd of Buddhist monks storm a law college, yelling, chanting and even hitting one or two seemingly random people and pushing back the police. Furiously they shout that the exam results have been distorted to favour Muslims.

A few weeks later, apparently abetted by the police, monks attack a slaughterhouse in Dematagoda, Colombo, alleging that calves are being slaughtered inside (illegal in the capital) or the meat is improperly stored.

Both are incorrect, but the monks spread rumours that the facility is Muslim-owned as most of the truck drivers are Muslim.

Sri Lankan monks are now taking this so-called "direct action" every few days. It is part of a growing wave of anti-Muslim activities in Sri Lanka carried out by new hardline Buddhist groups – a trend that is making many people anxious, even fearful.

It comes four years after the army in this mainly Sinhalese Buddhist country defeated Tamil separatists.

During Sri Lanka’s bitter civil war war the Muslims – a small Tamil-speaking minority, about 9% of the population – kept a low profile, although many suffered violence.

Muslims are seen as having remained largely loyal to the state during the 26-year conflict. Indeed in 1990 they were expelled en masse from the north of Sri Lanka by Tamil rebels with just a few hours’ notice.

But they now fear that ethnic majority hardliners are trying to target them.

At their recent rallies, the most prominent new hardline group, the Buddhist Strength Force (Bodu Bala Sena, BBS) have used coarse, derogatory language to describe Muslim imams and have told the Sinhalese majority not to rent property to Muslims.

At one meeting attracting thousands, the organisation’s secretary, Gnanasara Thero, told each Buddhist present to become "an unofficial policeman against Muslim extremism" and said "so-called democrats" were destroying the Sinhala race.

Away from the rallies, I visited a temple in the suburb of Dehiwala as the early morning sun hit the majestic bo tree.

The presiding monk, Akmeemana Dayarathana, has founded another ultra-nationalist Buddhist group, Sinhala Echo. He says the Sinhalese have real grievances, that Muslims are trying to convert people, building too many mosques – even having too many children. In fact statistics show that both the Sinhalese and Muslim population percentages have grown slightly over three decades.

He says, without giving any evidence, that Muslims propagated a message that Sinhalese families should be small.

"Then they started to increase their own population," he says. "This is the only country for the Sinhalese."

He proceeds to give a unique take on geography and religion.

"Look around the world – Malaysia, Indonesia, Pakistan, Afghanistan and others, they were all Buddhist countries – but the Muslims destroyed the culture and then took over the country. We worry they’re planning it here too."

A few days later his organisation stormed a house where they alleged Christian conversions were taking place and verbally abused the family inside, some of them – according to a local website – physically assaulting a woman.

Since last April, when monks led an attack on a mosque during Friday prayers in the town of Dambulla, there have been regular accounts of mosques being attacked or vandalised, for instance with graffiti or pictures of pigs. There have also been assaults on churches and Christian pastors but it is the Muslims who are the most concerned.

In the south of the country on 18 March, a mob of hundreds including monks surrounded a pastor’s house, set fire to tyres outside and shouted abusively to those inside. 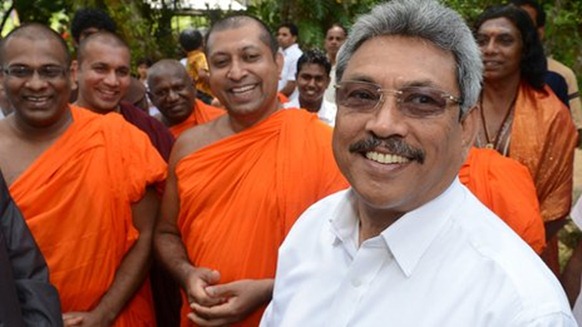 Defence Secretary Gotabhaya Rajapaksa has said monks are there to protect country, religion and race

"Muslims are worried all over the country," Mufti MIM Rizwe tells me. "Everybody is [in] fear."

He is president of the All Ceylon Jamiyyathul Ulama (ACJU), the main organisation of Muslim clerics, and meets me at a hotel where imams have come together for emergency discussions on the situation.

He defends the halal system of food classification, which the hardline monks are now trying to outlaw, and strongly denies that the community is fostering extremism as they claim. He rejects their accusation that Muslims have been destroying Buddhist holy sites.

"You can’t show one incident that Muslims have reacted in this way," he says. "No single statue or any religious worship places have been targeted by Muslims, totally not. Muslims have never done this. We hope we are guiding our Muslims to be calm and respect every religion."

Days later his organisation appears on a platform with moderate Buddhist monks who have decided to distance themselves from the hardliners. The hardliners are withering in their description of the moderates, calling them "unethical and immoral".

It has become clear that the BBS has top-level support. At its ceremony to open a new training school, the guest of honour was the powerful Defence Secretary Gotabhaya Rajapaksa, brother of the president.

"It is the monks who protect our country, religion and race," he said in a speech.

"No one should doubt these clergy. We’re here to give you encouragement."

President Mahinda Rajapaksa was reported to have told a BBS delegation in January not to promote "communal hatred", but the official communique was issued only in English, not in Sinhala.

It is also apparent that Muslim leaders have shied away from any kind of confrontation with the powerful monks or any supporters they may have in government on this issue, remaining largely conciliatory in their language and actions.