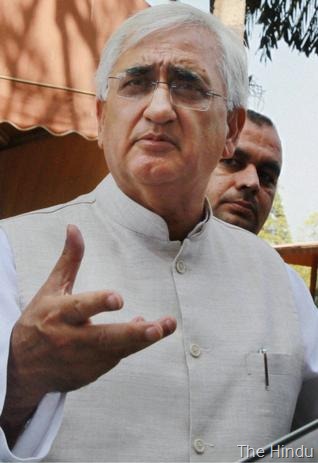 The government on Friday rejected the Tamil Nadu Assembly resolution that asked the Centre to stop treating Sri Lanka as a friendly nation and to slap sanctions on it while demanding a referendum on a separate Tamil Eelam.

“There is no question of [our] accepting them. That is not the only State that has a stake in this. What about the others? There are many other States. There are many other Assemblies. The rest of India is not supporting this,” External Affairs Minister Salman Khurshid told Karan Thapar in Devil’s Advocate programme on CNN-IBN.

He was asked whether the Centre was rejecting the three crucial aspects of the resolution adopted by Tamil Nadu Assembly on March 27.

To each of the three demands, Mr. Khurshid said a firm “no.”

“If all of India was to support, it was another matter. But if one State supports something, we are sensitive to their concerns but we do not necessarily have to..,” he said.

The Assembly resolution urged the Centre to take firm steps against Colombo until the “suppression” of Tamils was stopped and those responsible for “genocide and war crimes” faced a credible international probe.

The resolution came on the heels of Ms. Jayalalithaa’s letter to Prime Minister Manmohan Singh demanding that India boycott the Commonwealth Heads of Government Meeting (CHOGM) to be held in Colombo in November this year.

Asked if Finance Minister P. Chidambaram too was on board, Mr. Khurshid said, “I don’t think Mr. Chidambaram has taken a different view from anybody else in the government but Mr. Chidambaram has very strong feelings about how quickly and how effectively we can persuade Sri Lanka to proceed with the objectives that are very clear which it has promised India.”

On the issue of CHOGM in Colombo, he said the government had an open mind about it but made it clear that as of today it was a party to the collective decision.

“I think the Italian government has been very sensible. I think it has been more than fair. It took time to be persuaded. I have no problem to say that they have done a good job, they have done fair job,” he said.

Asked if the marines would be spending their jail term in India if convicted by the special court , Mr. Khurshid drew attention to an agreement between the two countries.