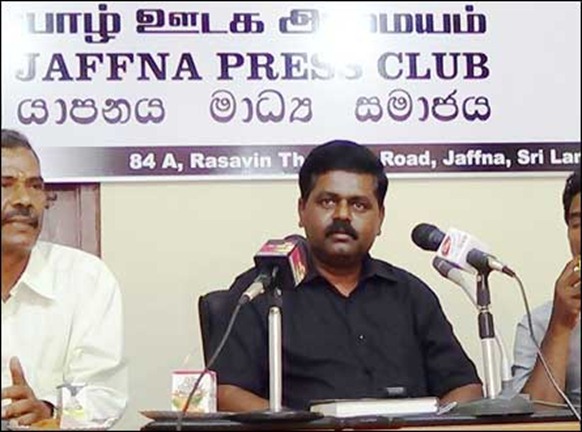 Mr Sritharan was addressing media in Jaffna at the Jaffna Press Club on Wednesday.

The TNA parliamentarian also noted that the resolution passed at Geneva was making reference to conduct Provincial Council elections to the Northern Province.

But, the SL government aims at deploying the All Ceylon Muslim Congress led by SL minister Rishard Badurdeen, the EPDP led by Douglas Devananda, the SLFP [in North] led by Geetanjali or Angkayan, the SLMC, various other factions and the so-called independent groups to contest separately in the Northern PC elections, Sritharan said.

“The SL government has schemed a plan to [divide and conquer]. Unlike in Jaffna peninsula, this would have an impact in Vanni – in Ki’linochchi, Mannaar, Vavuniyaa and Mullaiththeevu,” Mr Sritharan said.

Citing that there are only 3 seats in Ki’linochchi district, the grassroots oriented parliamentarian said that even if the TNA polled 40,000 votes, it will only receive one seat under the proportional representation system as all parties that manage to poll more than 5% votes would have a claim for a seat. The exact number of seats from Ki’linochchi is yet to be announced by the SL Department of Elections.

The SL government is now gifting motorbikes to those former LTTE members who are now brought under the so-called Civil Security Division, where they are given monthly wages of 18,000 rupees each. They are held under the grip of the SL government.

Likewise, there are 67,000 homeless people, 35,000 in Ki’linochchi district and 32,000 in Mullaiththeevu district. Following the resolution passed in Geneva, the SL government is aiming to use these details to obtain further funds from foreign countries as if it is going to help these people and utilize the opportunity to trap the people into its fold till the elections are over.

“This is purely an exercise aimed at the PC elections, the Tamil parliamentarian said adding that the EPDP would also have its arsenal of arms, violence and powers to be deployed for the manipulation of the voting. I don’t need to tell how Rishard Badurdeen would behave under elections, as you are all aware,” Mr Sritharan said. “It is an easy task for these parties to gain 5% voting through manipulations”.

“We are not prepared to fool our people that this PC system would bring in solutions to our problems. Neither are we prepared to fool our people that a political solution would come through this system. Perhaps, the act of taking part in these elections could set the course for the demise of the TNA. Perhaps, we may get into a situation where we can’t talk anymore about resolving our national question,” he said adding that the TNA has been placed at a situation where it cannot ignore taking part, as those are opposed to the TNA would be filling the seats of the PC. However, he said: “With the backing of our people and using the PC elections, we have to again prove that we are united and remain powerful under the TNA.”

Mr Sritharan also expressed displeasure on the conduct of Ranil Wickramasinghe, who has offered to save the SL State by convening an all-party meeting. Except, Mano Ganeshan, who opposed the proposal, even those whom we go around boasting as ‘progressive forces’ among the Sinhalese wearing red shirts were keeping mum with the UNP, he said.

Coming hard on the SL propaganda being waged by the SL Governor, Major General (retd.) GA Chandrasiri, that the people under the LTTE had no development for 30 years, the TNA parliamentarian said the real development of the people of Vanni was witnessed under the LTTE-run civil administration. This was much more meaningful than what the SL government is bragging as ‘development’ it had brought forward, Sritharan said.