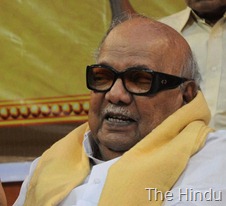 Slamming the Centre on the issue of attacks on Indian fishermen allegedly by Sri Lankan navy, former UPA ally DMK on Sunday said the government thinks that its job on the matter is over just by making a statement.

Party chief M. Karunanidhi said Tamil Nadu was expecting the Centre to show “at least one per cent”, of the concern it was showing in the Italian marines case, where two are charged with gunning down two fishermen off Kerala coast last year.

“We have been insisting for long for appropriate action by highlighting the attacks on Indian fishermen (from Tamil Nadu) by the Sri Lankan navy and the state government also takes up the issue through letters. After taking up the matter with Sri Lanka, they (Centre) make a statement in Parliament (or outside) to explain as if their job is over,” he said in a statement.

Mr. Karunanidhi’s remarks comes days after Defence Minister A.K. Antony informed the Lok Sabha that New Delhi has been taking up the issue of attacks on Indian fishermen with Sri Lanka and asked it to ensure that its Navy acts with restraint and in a humane manner.

He said a Lankan court had on Saturday extended the remand of 30 fishermen from Rameswaram till May 6. They were arrested by the island navy early this month and this was the second extension of their remand, he said.

So was the case with 26 fishermen from Karaikal who were picked up on April 5 and have been remanded in custody in a Sri Lankan prison till May 29.

“The sufferings of the fishermen and the case of taking up the matter with the Centre everytime are continuing saga. I request that without further delay, the Centre should take action to put an end to this issue. Tamil Nadu is expecting the Centre to show at least one per cent of the concern it is showing in the Italian marines case,” he said.

He recalled that on the orders of then Prime Minister Indira Gandhi a Lankan naval official who had allegedly attacked Indian fishermen inside Indian Territory was arrested and kept in Madnapam refugee came in the state.

The official and some of his colleagues were let off only after an apology from them, he said, adding, the Centre should keep this in mind and “it is the desire of our fishermen that such strong steps are taken now also.”