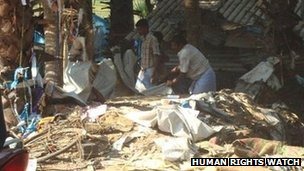 Amnesty International has accused Sri Lanka of intensifying a crackdown on dissent and urged the Commonwealth not to hold its summit there unless the human rights situation improves.

It says the government is responsible for harassing and imprisoning critics.

Sri Lanka has rejected the allegations, saying that a rehabilitation process is under way after years of conflict.

Last week Commonwealth foreign ministers agreed to hold the summit in Colombo despite objections by Canada.

The next Commonwealth Heads of Government Meeting (CHOGM) is set to take place in Colombo in November and Sri Lanka would then represent the Commonwealth as its chair for the next two years.

Canada’s Foreign Minister John Baird has said he was "appalled" that Sri Lanka had been chosen to host the meeting, arguing it had failed in the fundamental Commonwealth values of "freedom, democracy, human rights, the rule of law and good governance".

Dismissing Canada’s objections, Sri Lanka’s cabinet spokesman and information minister Keheliya Rambukwella told the BBC: "We have dealt with this human rights issue and we feel they are very biased and very unfair."

But Amnesty International’s report, released on Tuesday, echoed some of the criticisms.

It says that journalists, lawyers, human rights activists and opposition politicians are among those who have been targeted in what the report calls "government-sanctioned abuse".

"Over the past few years we have seen space for criticism decrease. There is a real climate of fear in Sri Lanka, with those brave enough to speak out against the government often having to suffer badly for it."

It said that human rights violations must end before Colombo is allowed to go ahead with hosting the meeting.

The Sri Lankan High Commission in London rejected the group’s allegations, saying that a rehabilitation process is under way after years of conflict.

Both sides were accused of human rights abuses throughout the conflict, with much focus on what happened in its final stages, when thousands of civilians were trapped in a thin strip of land in the north of Sri Lanka as fighting raged around them.