Amidst news reports on split within the Tamil National Alliance (TNA) and disunity in the Tamil political camp, the leader of the Tamil National People’s Front (TNPF) Mr Gajendrakumar Ponnambalam on Wednesday came forward to tell that his party is prepared to join with the TNA, and even prepared to dissolve its identity itself, if the TNA could stick to pre-2009 political goals of Tamils. The current split within the TNA is between the ITAK, the major constituent party of electoral political origins and other parties of militant political origins. Both factions have now approached the TNPF. The deceptive prospects of Northern Provincial Council elections, which the LLRC-based Geneva resolution urged to conduct, and Indo-US competitive engineering in the hijack of Tamil polity are behind the split, news sources in Jaffna said. 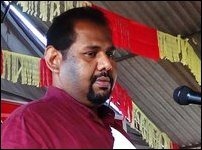 Mr Gajendrakumar announced the stand of his party publicly, while addressing TNA’s May Day meeting in Jaffna, organised at Arasadi near Nelliyadi in Vadamaraadchi.

While he was addressing the meeting, masked people entered his house premises in Jaffna and after asking his whereabouts noted down the numbers of the vehicles parked in the premises, news sources said.

Eezham Tamils in the North and East originally mandated the TNA, in the times of the LTTE, to politically pursue the Tamil national cause.

Declaration on the independence and sovereignty of the nation of Eezham Tamils and people in the North and East democratically mandating a separate country called Tamil Eelam, predate all militant politics of Tamils.

The absence of the LTTE, which genocide-abetters branded as ‘terrorists,’ could never mean the abandonment of the democratic cause and no power on the Earth has right to instruct Tamils on it, is the position of Tamil national political circles.

The split in the TNA after May 2009, causing Gajendrakumar to come out and form the TNPF, was due to infirmity in the TNA in asserting to the sovereignty of the nation of Eezham Tamils in the island.

TNA’s infirmity, implied denouncement of the national cause of Eezham Tamils, confused statements on federal solutions, talk on the 13th Amendment, withdrawal of opposition to the LLRC recommendations that were seeking demographic assimilation and ultimately the TNA going behind ‘non-descript’ solutions – all were due to pressure, intimidation and hijack alternately or jointly coming from India and the USA, is well known to the gagged Tamil masses in the island.

In recent times, New Delhi is planning to bring in some faces kept by it in reserve in India, to stage the Provincial Council deception of its rotten 13th Amendment, as though the demonstration in the East jointly blessed by India and the USA is not enough, alternative political activists in Jaffna say. 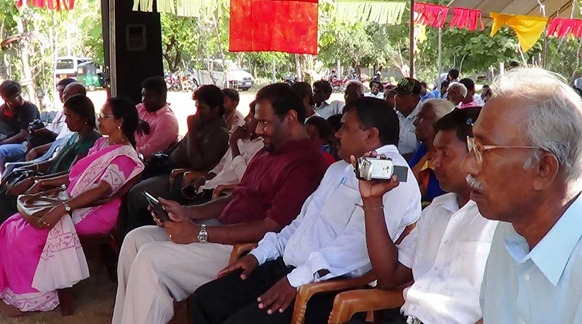 Speaking at the May Day meeting on Wednesday, Gajendrakumar came hard on the TNA for giving importance to the 13th Amendment-based deception of Provincial Council. He refuted the argument coming from some sections of the TNA that they would contest to ‘disprove’ the ineffectiveness of the model. Is there any need to still disprove it by contesting, asked Mr Gajendrakumar.

He also came hard on the TNA for not mobilising or undertaking any genuine people’s struggle.

The TNA either brings itself into the scene to get the credit whenever people rise up and organise protests or they show keenness in organising protests only to compete with the TNPF, Gajendrakumar said with examples, urging the TNA to genuinely take up people’s politics and mobilise the masses.