“The international conspiracy was not against the Sri Lankan state, but against the Eelam Tamils as a nation,” said Sinhala academic Dr. Jude Lal Fernando, urging the Tamils to not consider the powers who were culpable in their genocide as saviours. In statement for Mu’l’livaaykkaal Remembrance Day, Dr. Fernando, lecturer at Trinity College, Dublin said “It is not only the Sri Lankan state, but all those who aided the state are guilty of genocide,” referring to US, UK and Indian support to the Sri Lankan state, asserting that the reluctance of the powers to recognize the genocide was in fact to cover it up. “As the genocide continues today with the blessings of the same powers that supported the Sri Lankan state we are been told to accept it in the name of post-conflict reconciliation and development,” he said, encouraging the Tamils to continue their struggle with the moral high ground.

We celebrate power of human spirit and will to freedom

Why are we here today? 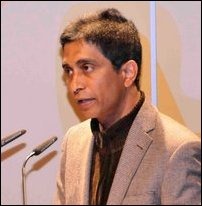 Why are we here today on the 18th of May after 4 years after the massacres of thousands of our people in cold blood in Mullivaikkal?

Are we here simply to remember the passing away of our loved ones? No, we are not here only for that. We are here for a greater reason. Beneath the pain of the loss of our dearest ones there is a deep down secret that we know.

Therefore, we are here not to remember our weakness, or a defeat or a loss. We are here to remember and celebrate the amazing and awesome human spirit, courage and the will to freedom of our people.

Our celebration therefore is a statement that we make to the world that the Tamil people did not give up their will to freedom even faced with death. A people who are determined to win their collective freedom as a nation cannot be conquered even by such mass murder.

What is the difference between the Sri Lankan state and the Tamil people?

We know that there are celebrations of victory today organised by the Sri Lankan state.

In 2002, they had to agree to a ceasefire agreement and to a peace process due to the balance of power that the Tamil national struggle achieved.

Then, how did they win the war?

Furthermore, after the ground work of power alteration had been effected, had India not given logistical support to the Sri Lankan military and China not given military support, the military victory would not even have been an option.

It was with this international support that the flood gates of brutality were opened against the Tamil people.

Moreover, in the last phase of the war had not UK and US diplomats in Colombo not supported the Sri Lankan state and not silenced the voices of the other European members of the Co-Chairs who opposed the war, the final massacre could have been stopped.

Some European countries had the wish to stop it, but did not have the courage to do so. Therefore, the biggest lie of the Sri Lankan state is not about the casualty figures, but to say that they won the war own their own.

Why were the Tamil people massacred?

This demand was a challenge to the unitary state of Sri Lanka which the British created, India supported since the last phase of the Cold War. The US wants this unitary state today to expand its power in the Indian Ocean region.

Therefore, the massacre of the Tamils is not a simple violation of human rights, nor is it simply a war crime. It is not at all a result of the collapse of law and order as the US/LLRC resolutions want to declare.

It was a pre-meditated, well-coordinated and systematic plan to destroy the collective Tamil national life, that is, Eelam Tamil identity and Tamil Eelam.

Those who died were massacred in such large numbers with the aim of destroying the Tamil people as a distinct nation and sundering their relationship with their land in the north and east of the island of Lanka and with their national leadership.

In short, the war against the Tamils was intended to destroy them as a nation. Therefore, the massacre of the Tamils is nothing short of genocide.

The more the global powers try to say that it was not genocide and call what happened by other names the more they expose themselves as culpable of the attempt to destroy a nation, of genocide. Let us call the massacre by its true name, genocide.

It is not only the Sri Lankan state, but all those who aided the state are guilty of genocide.

What is happening today?

It is true that Mullivaikkal was the largest single massacre in Tamil history that took place within a short period of time. Such a massacre was born of the intent to destroy the Tamil state and its national leadership so that genocide in Tamil homeland could continue.

While the UN resolutions based on US/LLRC interests are being passed, every element of Tamil national life is been bulldozed, through, land grab, Sinhala settlements, the establishment of Sinhala Buddhist shrines, militarisation, and the acquisition of Tamil economic resources.

This is accompanied by the continuous repression of the Tamil people not only in the homeland, but also in the Diaspora.

Intense psychological warfare is being waged against Tamil activists with the aim of forcing them to give up their national goals, even to give up the name Tamil Eelam and its symbols. In this sense, the genocide continues: it is not over.

The war against the Tamil nation is not over, but rather it continues by other means. As the genocide continues today with the blessings of the same powers that supported the Sri Lankan state we are been told to accept it in the name of post-conflict reconciliation and development.

In other words, we are been continuously raped as a nation, but we are being asked to accept it on the supposed grounds that it is not realistic to offer any opposition. We are been told by the powers that be to call our situation a post-conflict or post-war situation, but it is not this – it is a war by other means.

To call it post-conflict is part of the ongoing genocidal process. Let us be fully aware of the unseen war being waged against our collective aspirations.

Where do we go from here?

The Norwegian envoy claims that there was a so called ‘credible plan’ of the West to stop the final massacres. This plan was consisted in nothing else, but the attempt to force the Tamils to give up their right to self-determination, homeland and nationhood.

Four years ago, on this day, our people in Mullivaikkal with full determination and courage proclaimed, their NO to such moves. Their message was crystal clear. A life without freedom, justice and equality is worthless.

Either you live with dignity or you die with dignity. This is the political wisdom that they gave us though their lives.

Therefore, let us be clear about our collective political goal which is the most sublime truth about Mullivaikkal. This goal of justice and freedom cannot be changed for our comfort and convenience. Nor can it be changed by New Delhi, London or Washington.

Firstly let us keep in our minds and hearts always and everywhere that we belong to a people who had and who has the greatest possible moral courage in resisting subjugation.

Let us carry in our hearts the knowledge that the human spirit of freedom cannot be crushed even by death. Secondly let us have that great political wisdom to affirm that no one will give us freedom, but that we have to struggle for it and gain it ourselves. That is our self-determination.

Our freedom struggle rests on our shoulders and it is we who must carry it and bring it forward. Let us not consider the powers who were culpable in our genocide our saviours. We are not helpless victims, but a risen people who have clearly articulated our collective political aspirations.

And finally we have done so in Mullivaikkal by rejecting the so called ‘credible plan’ of the West.

What is our message to the world?

We are aware that there were many European countries who opposed the dismantling of the power balance in the peace process. We are aware at some stages they also wanted to stop the war of the Sri Lankan state.

Where are those journalists, humanitarian workers, N.G.Os, civil servants, diplomats, politicians, parliamentarians and ministers of the European governments who went to Vanni and saw with their own eyes the great achievements of the Tamil national struggle?

You know friends that the Tamil struggle was a genuine human struggle. Don’t you? Why do you then keep quiet now? Is it because that the power balance has changed today? Can you sincerely keep quiet when genocide has taken place and continues to take place against the very people whom you supported and admired once?

We request that you to come forward to tell the truth as it is your moral duty to do so.

We are also aware that the countries in the Global South led by China and Latin America started supporting the Sri Lankan state to counteract the growing US interest in the Indian Ocean.

Is the Tamil struggle for freedom different from the other struggles of the oppressed? We request that you see with open eyes that our struggle is a freedom struggle that has given inspiration to the struggles of many oppressed groups in Asia.

Why is this reluctance to recognise us? There comes a time when the truth must be told.

This is the time to tell the truth.

On this great day as Tamils let us publicly state that we, as Tamils, are a nation which has a homeland.

We will not give up our will to freedom.

We will continue with our freedom struggle with unassailable moral high ground and courage.

We are ever grateful to all those who have offered their lives on this journey of our struggle.

We are determined to learn from their political wisdom.

We celebrate our humanity as Tamils today.

The Tamils are part of humanity and their struggle is a human struggle which cannot be dismissed or ignored.

Let this day be a day of Tamil awakening.