“Using military operation, they can silence the voice for a time being, they cannot kill the ideology and idea. They cannot defeat ideology and ideas with military means,” Yasin Malik, Chairman of Jammu Kashmir Liberation Front (JKLF) said in an exclusive interview to TamilNet on Saturday. Speaking from Cuddalore, Tamil Nadu where he had gone to address the public in solidarity with the Mu’l’livaaykkaal Remembrance Day event organized by the Naam Tamizhar party, he further said that if the international community thinks that it can suppress people’s movement through military means, peace and security cannot be achieved in the world. “If they want peace and stability in the world, then they will have to resolve the people’s issues. Otherwise, the people across the globe, who are the voiceless people, they will get together and they will form their own strategy,” the Kashmiri leader said. 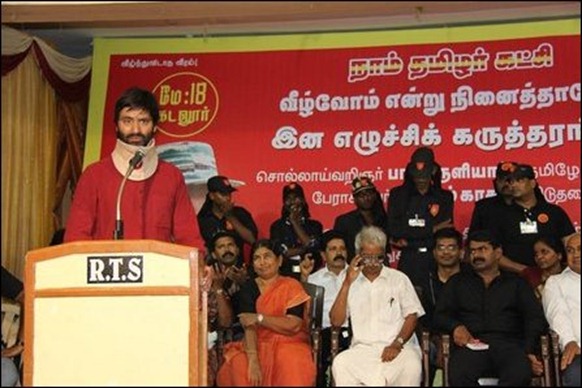 Mr. Malik was scheduled to speak at a public space and permission had been obtained by the Naam Tamizhar party to hold the event.

In a last minute action, the Tamil Nadu police denied permission to hold the gathering in open public and also prevented a rally by hundreds of Naam Tamizhar activists, Umar Khayan, activist with Islamic Youth Movement Against Genocide and a speaker at the event told TamilNet, condemning this action of the police.

However, the organizers shifted the venue of the event to NT Mahal, a marriage hall, and it proceeded successfully.

Along with Yasin Malik, Naam Tamizhar leaders and activists, and activists from the Tamil Nadu Muslim community spoke at the event, strongly asserting the sovereignty of the Eezham Tamil nation and condemning the on-going genocide.

Mr. Malik’s speech at the event was enthusiastically received by the Tamil audience, sources said.

Mr. Malik, the chairman of a faction of the JKLF, was a former militant leader in the thick of the Kashmiri insurgency in the late 80s. Arrested by the Indian forces in the early 90s, he is reported to have endured severe physical and psychological torture in detention centres in Kashmir.

Following his release, Mr. Malik has advocated a non-violent struggle to arrive at a honourable settlement to the aspirations of the Kashmiri people.

TamilNet: You are a Kashmiri leader who has a very long experience in the Kashmiri independence struggle. How do you look at the genocide of the Eezham Tamil nation in May 2009 and which is continuing even till now?

Yasin Malik: It is unfortunate when the whole of Tamils were engaged in a dialogue and peace process and there was international engagement going on through the Norwegian government when the military operation was started against them. Thousands of people died, including the old, women and children. It cannot be justified in anyway and it was a completely brutal operation.

Today, when I came here in solidarity with all those people who have been killed in the conflict, the state government gave the permission and then they withdrew the permission. This shows their undemocratic manner. But I’ve seen the people who are conscious of the struggle, a democratic struggle, across the globe, and through a military operation their will cannot be broken.

Yes, you can kill the individual. But killing individuals is not your victory. Question is that romance and idealism, and this I have very much found in the Tamil people here in Tamil Nadu for the Tamil people in Sri Lanka. It is a people’s movement, it is not terrorism. When it is people’s movement, the government and state must realize that they will have to deal with the people.

Yasin Malik: I do not know much about which country was involved. Primary thing is that it is the Sri Lankan government who used military operation. Any country, whosoever, who supported them, I believe that where there is a people’s struggle, a democratic struggle, it needs to be resolved. It cannot be defeated through military means. For the rest, I do not know who was involved there and who was not. But as far as the Sri Lankan government is concerned, they cannot bail out themselves from what happened. While the Tamil people were engaged in dialogue with them, the military operation was launched.

Yasin Malik: I will tell you one thing. If the international community thinks they can suppress the people’s movement through military means, I don’t think we can achieve peace and security in the world. If they want peace and stability in the world, then they will have to resolve the people’s issues. Otherwise, the people across the globe, who are the voiceless people, they will get together and they will form their own strategy. So I hope that the international community will sit and realize the seriousness of the situation. They cannot defeat the people through military might. If they want peace, stability, they will have to resolve the issues. Otherwise there will be no peace and stability in the world. Peace cannot be created in vacuum. Peace needs a solid foundation. The foundation is, if there are conflicts, the conflicts need to be resolved according to the aspirations of the people of those regions. 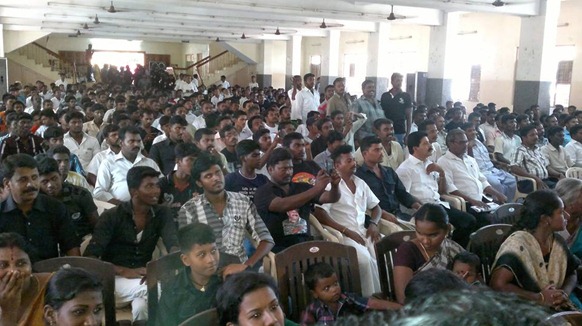