While the uprooted Eezham Tamils of Valikaamam North confront the occupying Sri Lankan State against the seizure of their lands in the former ‘High Security Zone’ (HSZ), the Sri Lankan military is moving fast with its secret plans of establishing permanent Sinhala military settlements to bring in families of the Sinhala soldiers into the former HSZ in Jaffna. Informed paramilitary sources in Jaffna told TamilNet Tuesday that a Sri Lankan commander has been assigned the task of converting the former HSZ into a Sinhala Military Zone (SMZ), consisting of Palaali military base. Already, more than 5,000 houses have been constructed in Mu’rika’ndi in Vanni and families of Sinhala soldiers are being provided housing there. There are at least 30,000 Sinhala soldiers stationed in the Jaffna peninsula.

All the Establishments of the global powers have been abetting the militarisation project of the Sri Lankan State, which is converting the occupied region consisting of fertile lands and significant fish beds into a Sinhala Military Zone. 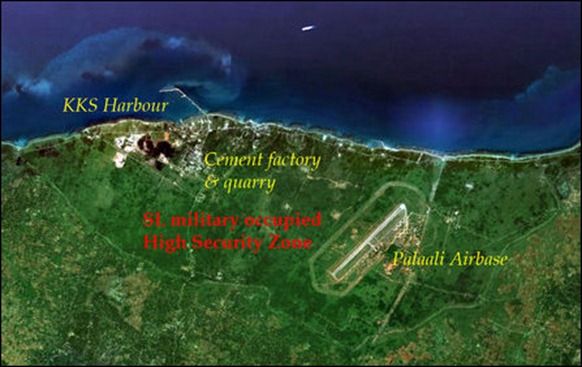 The SL State has been ‘developing’ the SMZ with power supply from a Chinese corporate, renovating the port and the airstrip with Indian assistance and clearing the mines with Western aid. Tourist resorts and Buddhist scared zones have also been set-up.

“The Tamil diaspora is failing to address the issue by challenging the Establishments that continue to abet the structural genocide,” they further said.

Meanwhile, in an effort to play down the level of the militarisation, the Sri Lankan military commander in Jaffna, Major General Mahinda Hathurusinghe, is engaged in a propaganda stating that the SL military is reducing its presence to maintaining only three military bases in Jaffna.

But, in practice, more lands are being occupied also outside the former HSZ to establish military camps.

The paramilitary sources also said that the SL Navy was silently militarising the coastal areas in the Jaffna peninsula and that the Tamil people are being indirectly forced to sell their properties and vacate the islets.

In the meantime, the SL presidential sibling and defence secretary Gotabhaya Rajapaksa has warned the government of his brother Mahinda Rajapaksa that giving police and land powers to the provinces meant that the Northern Province comprising the districts of Jaffna, Mullaiththeevu, Vavuniyaa, Mannaar and Ki’linochchi could pose a ‘major security challenge’ to the SL unitary state in the future.