A team of high-ranking Indian military intelligence officials, led by Indian Armed Forces Intelligence Unit Director General R.N. Singh, visited Jaffna and Vanni on Wednesday and Thursday. The team was received by the genocidal Sinhala military occupying the country of Eezham Tamils. The Indian visit, that took place while Rajapaksa delegation was in Beijing and was signing major agreements on money and defence, follows China’s Vice Intelligence Minister’s visit to Jaffna and Trincomalee in April. Any visit of Indian officials is nowadays considered a jinx and is much feared by Tamils in the island, just as they fear sooth-saying persons coming in the middle of the night with curses from the cremation ground, because of the long history of such Indian visits foretelling escalation of miseries during the war and aftermath, commented news sources in Jaffna.

India and genocidal Sri Lanka have military to military relationship.

The commander of the occupying Sinhala military, Maj. Gen. Mahinda Hathurusinghe, first received the visiting team of Indian military intelligence at Palaali in the Sinhala military zone in Jaffna.

At Palaali, the visiting Indian team marked an important imperial ritual of paying homage at a recently opened memorial for the IPKF that had committed war crimes against Tamils quarter a century ago.

The Indian military doesn’t pay homage anymore at the abandoned memorial, remembering soldiers died in the war against Tipu Sultan, erected by its Madras Regiment at the fort of Sri Rangapatna, commented an academic in Jaffna.

After holding talks with the Sinhala commanders in Jaffna, the intelligence team left for Ki’linochchi. In Vanni the team was received by the commanding officer of the occupying Sinhala military headquartered in Vavuniyaa. 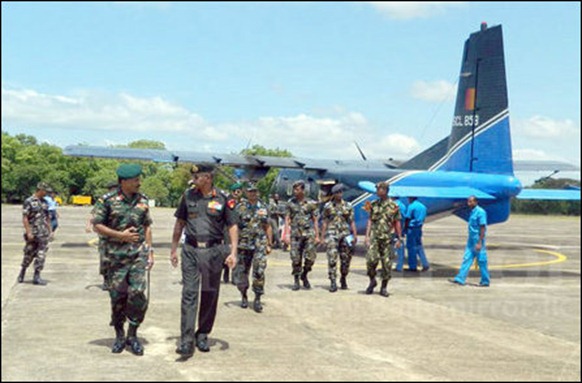 Visiting Director General of Military Intelligence of India, Lieutenant General RN Singh was accorded a warm welcome on his arrival at the Vavuniyaa airstrip by the commander of the occupying Sri Lankan military in Vanni, Major General Boniface Perera on Thursday. [Photo courtesy: Daily Mirror]

Tamil media was not allowed to photograph the visit in Jaffna, but photos of the visit to Vavuniyaa were somehow released to Sinhala media in Colombo. In Jaffna, officials of the Indian diplomatic mission had made many restrictions on the release of news in the local media.

The team was on a visit to get first hand experience of the ground situation, commented news sources.

The presence of Indian military intelligence in Vanni during the genocidal massacre is a widely acknowledged secret among the SL military sources.

But this is the first time after the withdrawal of the IPKF in the early 90s that a high-ranking Indian military intelligence team is making an official and open visit to the island, news sources in Jaffna commented.