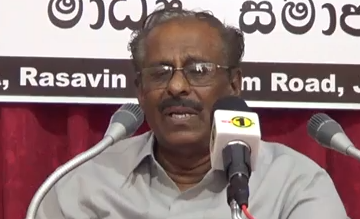 TNA parliamentarian and ITAK General Secretary Mr. Maavai Senathirajah, on Thursday, questioned the credentials of the New Delhi meet of ‘Sri Lankan Tamil Leaders’ organised by Congress parliamentarian Dr E.M. Sudarsana Natchiappan. We don’t know whether it was organised by the government, a political party or by individuals, Maavai said. While we are already engaged in direct talks with the Indian Central Government over our political demands, in between what is the validity of such meets taking the 13th Amendment position and to what extent this is going to be beneficial, he raised his doubts. The dates fixed by Mr Natchiappan (June 5-6) may not be convenient to us but we anticipate that there will be a meeting with the Indian government by the middle of June, the TNA parliamentarian further said.

Mr Maavai Senathrajah was answering to a question put to him by media in Jaffna on the New Delhi conference announced by Dr Natchiappan.

An English translation of his response in Tamil follows:

Last time, the Tamil parties went to New Delhi, as we were informed that Congress parliamentarian Natchiappan was organizing a conference. We were also told that he was close to Ms Sonia Gandhi, the leadership of the Congress party.

The representatives of 8 parties who met there had unanimous agreement on several points, especially on the first topic on how to address the day-to-day issues being faced by our people. We all signed agreeing to these issues.

The second topic was about the political solution to the conflict. Six parties present at the conference wanted to avoid signing on a position decaring that we are a distinct nation and that we have the right to self-determination. Despite our [party’s] agreement on this position, we chose to delay [proclaiming] it, as we wanted to make a common position on this.

Even now, [some] have contacted us regarding the [new] conference. But, we are not able to make it on the date they have fixed.

We also need to know in detail that on what basis and with what mandate the delegates will be attending this conference.

I was very frank with Mr Natchiappan at the first conference and said that we are engaged in talks with the Central government. The Central Government of India is aware of the appeals submitted by us to the Colombo government. While our talks were based on that basis, what is this interference based on making the 13th Amendment as a basis or giving some kind of a shape to 13th Amendment, we had asked Mr Natchiappan. Who is the [competent authority] taking the responsibility of seeing the completion and implementation of such a process, we asked.