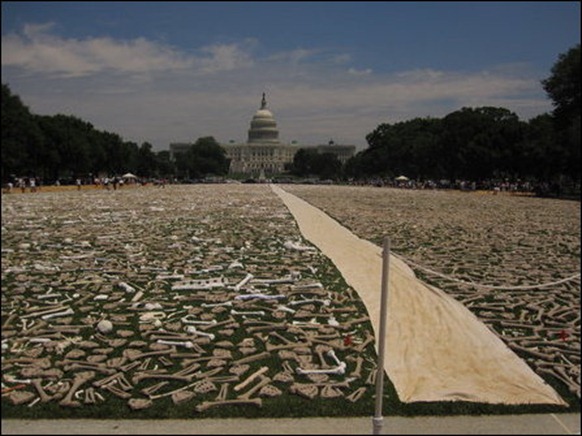 "Three years we have been collecting 1,000,000 handcrafted bones for a three-day installation event on the National Mall in Washington, D.C., June 8-10, 2013. The installation will exist as a collaborative site of conscience to honor victims and survivors, and will also serve as a visual petition against ongoing conflicts and a resounding call for much need and long overdue action," the organizers said in their website.

Spokesperson for the collective Tamil organizations that attended the protest told TamilNet, "This is a key event that will help us to raise the level of awareness of Sri Lanka’s war crimes, crimes against humanity, and genocide. The event was a great success today, and the banner with the Auchwitz – Manik Farm comparison was a great hit with many Americans posing for photos with it. The organizers were absolutely terrific and will keep our materials available at a table on the mall.

"We made every effort to network with key organizing personnel of this grass-root movement who are well aware of the Sri Lanka genocide, and as we go forward there will be followup collaboration with the key personnel at the top," the Tamil activist said.

The Laying of the Bones was opened by Rabbi Bruce Lustig, who told the volunteers that he is heartened to see the number of volunteers, and that the event showed that Americans will remember the voiceless who were killed for their ethnicity and race by their own governments, and this awareness will implore them to agitate for international action to prevent future mass killings.

The event continues on Sunday with educational workshops, a candle light vigil, followed by a lobby day "Take a Bone to Congress" with advocacy meetings on Capitol Hill. 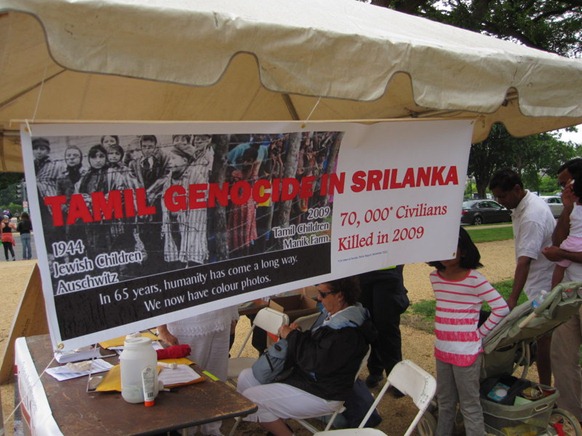