Jaffna University Teachers’ Association boycotted a ‘national’ level conference on the “Role of Higher Education in Reconciliation” hosted in Jaffna last week by genocidal Sri Lanka’s University Grants Commission. Even though Colombo media reports said that the conference was a joint venture of the SL-UGC and the University of Jaffna, it neither took place in the Jaffna University premises nor was it participated by the academics of the university. Fearing the prevailing mood at the university, the conference was held almost as a closed-door affair at a hotel in Jaffna. Only the VC and the administration that were obliged to go represented the Jaffna University. Among the 25 speakers brought by the SL-UGC, the star speakers to “set the tone and tempo of the conference,” were ‘Terrorism Professor’ Rohan Gunaratna and Law Professor C.G. Weeramantry.

C.G. Weeramantri, emeritus professor of Monash University in Australia is a former judge and a former Vice-President of the International Court of Justice in The Hague, Netherlands. 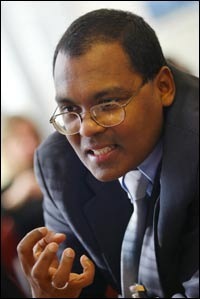 Terrorism Professor Rohan Gunaratna is attached to the School of International Studies of the Nanyang Technological University, which is one of the two largest public universities in Singapore.

Those who know the modus operandi of Singapore government institutions said that no one without ‘background’ could find the academic title and space to operate from Singapore in such a field.

Revealing his envisagement for the model of higher education in the island, Rohan Gunaratna, who was allowed to address the convocation of the Ruhuna University in the south of the island last month, said that 20 years ago, of all the academic institutions in the island, the one that had impressed him the most was the Sir John Kotelawala Defence Academy, which has now become General Sir John Kotalawala University.

The Terrorism Professor was with all praises for the defence university and its Vice-Chancellor General Milinda Peiris.

In Jaffna, he was speaking on “Post-conflict Strategy: Promoting Moderation, Tolerance and Co-existence.”

His remarks in Jaffna, shedding crocodile tears that the people of Jaffna are not taking care of the former LTTE cadres, have enraged human rights and social activists circles, news sources said.

After doing everything to wreck the liberation fighters of a nation physically and psychologically, and after allowing the continued abuse of them in every respect by the occupying Sinhala military, when has the International Community of Establishments restored the power of the Tamil people, entrusting them with the task of rehabilitation of the cadres, the activists asked.

The real rehabilitation, which is ultimately connected to the self-esteem of the cadres, comes only with the restoration of the sovereignty of the nation of Eezham Tamils, they said.

Whoever was behind the SL-UGC conference, Rohan Gunaratna’s presence made many in Jaffna to easily grasp the agenda as one set by military minds to cover the crimes and to intimidate the academics, especially the Tamil academics, to accept and fit into the militarised reconciliation and unification of the island under the Sinhala State.

Starting his career as a reporter to Colombo-based The Island in the first half of 1980s, the fabricated and twisted stories written by Rohan Gunaratna, as though he had seen them by his own eyes in Jaffna, are still remembered by many old-timers in the media circles of Jaffna.

Of ‘academic reconciliation’ orchestrated from some quarters, political observers cited another example of English Professor Rajiva Wijesinha, who was steadfastly denying even an iota of crime committed by the Rajapaksa regime, compiling a Sinhala-Tamil-English poetry anthology to prove affinities of higher minds in the island, and another English professor launching that in the SL High Commission in Canada.

Those who say that it is the diaspora that misleads the Tamils in the island should see the sentiments expressed by the academics of the Jaffna University in boycotting the SL-UGC conference, the political observers further cited.

However, academics and the public in Jaffna were astonished to learn that a well-known professor couple coming from the Eastern University was in a situation to participate the conference.

When all the Tamils were silent, a person who was conspicuous at the conference in backing Rohan Gunaratna, was a diaspora visitor from the UK, Mr M Sooriasegaram. He usually poses himself as a Leftist and anti-imperialist.

But, Rohan Gunaratna was countered and questioned by Mr S Thavarasa, a former EPDP parliamentarian from Jaffna.

A diaspora stalwart from the USA, now in the service of the occupying Sinhala governor, was also seen at the conference.