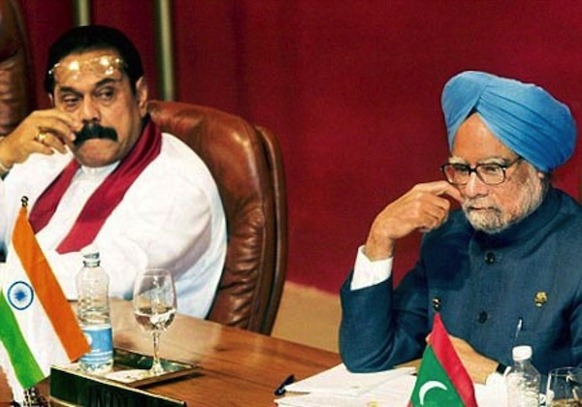 “…Sri Lankan foreign policy must be centred on a non-hostile relationship with India…Choice is the essential question; not only the choices open to us, but the choices likely to be taken by others…” – Mervyn de Silva, ‘External Aspects of the Ethnic Issue’ (1985), Crisis Commentaries (2001: pp68-78)

In the aftermath of the victory over the LTTE the Sri Lankan state at its highest level did not subscribe to the absurd doctrine that there was no further need for a political settlement or solution because there was no longer a problem. On the contrary the May 21st 2009 joint communiqué with India stated that “…both sides also emphasized the urgent necessity of arriving at a lasting political settlement in Sri Lanka.” If one is tempted to conclude that this was due to Indian nudging or Sri Lankan gratitude for wartime Indian assistance and a gracious concern for India’s continuing domestic compulsions, such an interpretation would be shattered by the joint statement on May 23, 2009 with UN Secretary-General Ban Ki Moon. That went further than the communiqué with India and contained a categorical admission that the war and our victory over the LTTE had not eliminated the need for “addressing the aspirations and grievances of all the communities”:

The statement continued with: “…President Rajapaksa and the Secretary-General agreed that addressing the aspirations and grievances of all communities and working towards a lasting political solution was fundamental to ensuring long-term socio-economic development…President Rajapaksa expressed his firm resolve to proceed with the implementation of the 13th Amendment, as well as to begin a broader dialogue with all parties, including the Tamil parties in the new circumstances, to further enhance this process and to bring about lasting peace and development in Sri Lanka…” (May 23, 2009)

The joint statements of May 21st and 23rd 2009 between GoSL and India and the UN S-G respectively, traced the outlines of the post-war roadmap agreed upon between the President and the international community. The commitment contained in the text of May 21st to “proceed with implementation of the 13th amendment” was not contingent upon the statement that GoSL “…also intends to begin a broader dialogue with all parties, including Tamil parties…” but was seen as preceding the “broader dialogue”.

Even more conclusive and significant is the joint statement of May 23, 2009 with the UN Secretary-General. The President’s “firm resolve to proceed with the implement the 13thamendment” was followed by the statement of intent to begin a broader dialogue with all parties including the Tamil parties “in the new circumstances”. The former was not dependent or conditional upon the latter.

Clearly, in 2009 the implementation of the 13th amendment was not regarded by this country’s leadership as contingent upon or to be preceded by a Parliamentary Select Committee.

Thus the statement also reveals that the Sri Lankan leadership did not at that time, buy-in to the notion that socio-economic development alone can substitute for, still less solve, the problem of communitarian grievances and aspirations of diverse communities. Indeed it shows a lucid grasp that a political solution is nothing less than a prerequisite for socio-economic development. Finally it reveals that the political solution envisaged is the implementation of the 13th amendment and a further movement by means of an all-inclusive dialogue.

Had there been any insidious implications the Sri Lankan delegation was well equipped to interdict them, containing as it did, a strong legal arm which scrutinised every sentence of every draft. The legal team consisted of Attorney-General Mr Mohan Pieris, Shavi Fernando and Yasantha Kodagoda two Senior Deputy Solicitors-General, and Dr Rohan Perera, Senior Legal Officer of the Foreign Ministry.

Contrary to the claims of Sri Lankan officials who present our victory as the first such in the 21st century, Vladimir Putin won a major war against a terrorist militia in this century a few  years prior to May 2009. So too did the Angolan government. Putin is no NGO-backed cosmopolitan liberal and is in fact reviled by them. He is however, a very smart leader who combines hard power with autonomy reforms. He implemented regional autonomy of a far wider sort than the 13th amendment, in parallel to his military drive against the Chechen terrorist militia (a drive which included the aerial bombing of targets in Grozny) and has allowed that autonomous entity to become prosperous. Thus, while there are copious Western and INGO criticisms of President Putin on grounds of human rights and governance, there aren’t any war crimes/violations of international humanitarian law campaigns in the UN HRC in Geneva, not even on its sidelines by Channel 4 and INGOs, against Russia’s victory in Chechnya.

In the closing year of our war and in its aftermath I had expressly recommended a pragmatically progressive policy of autonomy. This is what I wrote at the time and was carried in the February 2009 issue of HIMAL under the caption ‘The Next Phase’, BEFORE the liberation of Mullaitivu (with the disclaimer that these were my personal views):

“…Two non-military yet strategic tasks thus face Sri Lanka in 2009. First, the political prevention of the sustenance or resurfacing of ethnic separatism and support for the Tigers through so-called peaceful political means. This requires stringent anti-separatist legislation along the lines of those that exist in India, Turkey and Spain. Second, a variety of elections – parliamentary, provincial and local authority – need to be held in the liberated areas. The aim here is to throw up a moderate democratic Tamil representation with which the Sri Lankan government can negotiate a final settlement of ethnic grievances, the outlines of which are already being chalked out by the All Party Representative Committee, the APRC.

…The real challenge of 2009, then, is politico-military. First, the liberation of Mullaitivu needs to be accomplished in such a decisive and comprehensive manner as to pre-empt, to the maximum degree possible, the survival of the LTTE as a guerrilla/terror force. Second, simultaneously there has to be a redrawing of the Sri Lankan social contract in a manner so enlightened and reformist that the Tamil people feel included as fully fledged citizens, enjoying equal rights and genuine provincial autonomy. 2009 must be the year of the full and final liberation and reunification of Sri Lankan territory; and upon that reunified territory, the beginning of the construction of a truly Sri Lankan identity, an authentically Sri Lankan nation.

…Sri Lanka can win the war and lose the peace by one of two errors. The first would be to permit the separatist project to continue to function, for separatist political agencies to function unchecked. We could thus peacefully jeopardise that which the armed forces have won on the battlefield. This could generate a seriously destabilising nationalist-populist backlash. The equal and opposite error would be a lack of generosity, flexibility, enlightenment and wisdom, due to which we fail to expeditiously remove the discrimination, frustration and alienation felt by the Tamil minority. That would cause the reactivation, one way or another, of the Tamil separatist struggle. Either outcome would betray the gains of military victory, and would continue to torment the people of Sri Lanka.” (‘The Next Phase’, Dr Dayan Jayatilleka, HIMAL, Feb 2009)

The Sri Lankan regime chose or was prevailed upon by hawks in the state apparatus and the governing coalition not to take the path clearly demarcated in the joint statements of May 21 and 23rd 2009. Instead it bought as much time as it could for those who wished to consolidate in the ground in the North while maintaining a political vacuum. Today time and space are fast running out. Sri Lanka lacks the material, economic-financial and diplomatic capacity for the attrition that would result not only from the unilateral redrawing of an inherited, uneven bilateral agreement but also the non-fulfilment of post-war international commitments far more freely entered into at the apogee of achievement of the Sri Lankan state.

As Sri Lanka’s most renowned analyst of world politics and foreign policy, Mervyn de Silva, whose 14th death anniversary fell last weekend, observed in 1985 at a Marga seminar on the ‘External Aspects of the Ethnic Issue’ (observations which proved prophetic two years later with the airdrop, the Accord, and the IPKF):

“…To amend Orwell, all countries are equal and sovereign but some more sovereign than others. While in principle all nation-states enjoy equal sovereignty, the effective exercise of such sovereignty is contingent on several factors, some permanent and unalterable. These include the size and population of a country, its economic resources, its industrial and military strength and most of all, its geographic location and therefore the geo-political environment…If this island were located next to Papua New Guinea, the Palk straits and Tamil Nadu’s fifty million people would not be a source of anxiety. So any sensible Sri Lankan foreign policy has to be centred on an axiomatic factor: the nearness of our huge and powerful neighbour. Does this mean that a small nation must necessarily be subservient to its big neighbour, that it cannot pursue a policy independent of its big neighbour, or even hostile to its neighbour? Not at all. It can. But it must recognize and be ready to face the consequences of such a hostile relationship…Sri Lankan foreign policy must be centred on a non-hostile relationship with India…As in other fields of policy-making, choice is the essential question; not only the choices open to us, but the choices likely to be taken by others…”

The Sinhala hawks believe that Sri Lanka can take on or ignore the Tamil Diaspora, the West, the UN, India, the Western media and the INGOs (not to mention  a billion Muslims and  2.3 billion Christians) and do so all at once. They think that India is an enemy. Some of them, like Maj-Gen (Retd) Lalin Fernando, disregarding my cautioning about the balance of power and Sri Lanka’s strategic vulnerability, think that we can take an Indian kinetic power-projection on and prevail: “DJ must know that if anyone decides to attempt to ‘come along’, it won’t be like the ‘last time’ (1987) either. Our troops are already in Jaffna to give a fitting and extremely warm welcome especially to anyone DJ has in mind…They are some of the most battle hardened, professional and skilled troops around. In 1987 there was only an ersatz division with little artillery and just wheeled armour in Jaffna with enthusiastic but severely limited air and sea defences.” (Lalin’s Column: ‘Holbrooke, Devolution and Wargames’, Asian Tribune, Vol 12, No 430)  Just how these silly Sinhala Sun Tzus who are willing to fight the Indians down to the last Sinhala peasant lad in uniform, plan to secure supplies (especially fuel and ammunition) for an island, which in a worst case R2P scenario can be easily cordoned off by the powerful neighbouring navy and subject to a no-fly zone by its air force, beats me.

I think that India is neither enemy nor friend, and may sometimes be a ‘frenemy’ (as the US and Pakistan say of each other in frustration) — but remains at all times, a REALITY. The Sinhala hawks think that a TNA-run Northern Provincial Council will be on a continuum of conspiracy with Tamil Nadu radicals, the separatist Tamil Diaspora ideologues, the US and India. I think, to the contrary, that a Tamil Nadu and Diaspora-backed Tamil nationalism and a restive Northern Provincial Council cannot be contained by the Sri Lankan state other than through co-management and politico-diplomatic quasi-partnership with Delhi.