However condemned by Eezham Tamils, the USA and India have committed on several occasions to ‘provincial’ solutions to the national crisis of Eezham Tamils. The ‘provincial’ wording has also got into the UNHRC resolution, tabled and fine-tuned by the two and passed by 47 Establishments. But, what do they say for Colombo’s current meddling in creating a new Sinhala division, Weli-oya, in the Northern Province, by altering district boundaries and thus endangering the province’s demographic security and contiguity, ask Eezham Tamil civil service circles in the island. While official survey maps show that the Vavuniyaa district of the Northern Province has a boundary with the East, it is now erased out in the 2012 census map, while Anuradhapura will fill the gap. 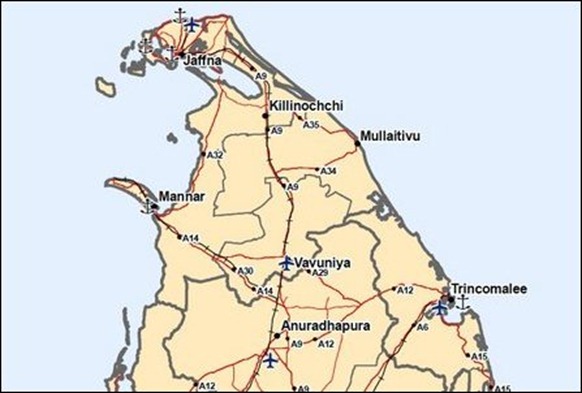 Sri Lanka Administrative Map showing no common boundary between Mullaith-theevu and Anuradhapura districts. This is clearly shown in the official Survey Department maps too. 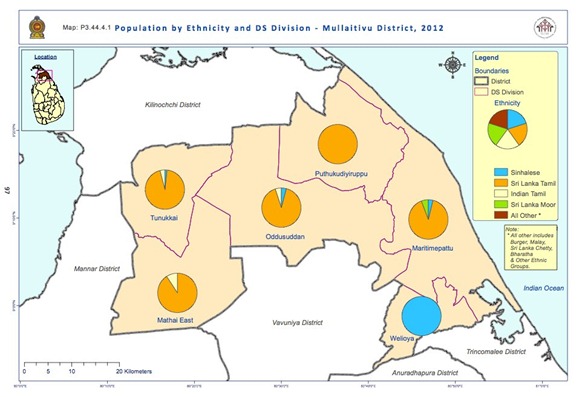 The Census Map of 2012 showing Weli-oya, a recently created and colonized division of the Mullaith-theevu district as an exclusive Sinhala division. The division has now wedged the contiguity between the Tamil districts Vavuniyaa in the Northern Province and Trincomalee in the Eastern Province, while it established contiguity with the Sinhala district Anuradhapura in the North Central Province.

This has been done in such a way, so that Vavuniyaa would lose its boundary with Trincomalee and the Sinhalicised Weli-oya will have contiguity with Anuradhapura district of the North Central Province.

No Tamil civil servant in the Northern Province actually knows now what are the district boundaries and what are the village boundaries in the so-called Weli-oya division of the Mullaith-theevu district. No officials’ conferences related to the division invites any Tamil officials. Such conferences don’t take place in the Northern Province either.

All data related to Weli-oya is totally blacked out in the official web portal of Colombo’s Ministry of Public Administration and Home Affairs. In the 2012 Northern Province Statistical Handbook, 9 GSO (village level) divisions are listed under the Weli-oya division, but without proper code numbers due for such GSOs.

Only the map now released by the 2012 Census Commission shows that the Weli-oya division is a 100 per cent Sinhala division in the Mullaith-theevu district and it has a common boundary with the Anuradhapura district of the North Central Province.

The new division has been carved out in such a way so that all the potential tanks and arable lands will go the Sinhalese brought in to colonise the division.

Colombo is thoroughly opposed to ethnic divisions to protect Tamils in the Ampaa’rai district in the East. It has not earlier protected the identity of Tamils and Muslims in the Puththa’lam and Kurunegala districts of the North Western Province also.

There can’t be ethnic territories in the island says presidential sibling Gotabhaya and the genocidal regime. But how could an exclusive Sinhala division has been created in the Tamil province, so quickly within the last couple of years, and who is answerable to this, ask Tamils for alternative politics in the island.

The USA, India and the UN are answerable to so many crimes committed against Eezham Tamils as the entire genocide, which they are not prepared to accept, has now largely been perceived by Tamils as something that had been designed and executed by no one but the former two and the third one endorsing it.

But what is now happening even to the province for which they had committed is just another explicit example for the entire world and for those among the Tamils who still look upon to them to realise what these elements are really up to, commented Tamils for alternative politics in the island.