In the opinion of political analysts, the polity of Tamil National Alliance (TNA) is nothing but playing a stooge to the USA and India – time after time and without any returns – said Dr. S.K. Sitrampalam, Emeritus Professor of Jaffna University and a senior ITAK leader, while addressing the Jaffna Press Club on Saturday. TNA has failed in mobilising a people’s struggle, failed in politicising people on the question of rights, failed in placing a full-fledged federal solution draft as an alternative to separate Tamil Eelam, failed in forging alliance with Muslims and Up-country Tamils, failed in addressing Sinhala people on the justice behind the Tamil struggle, failed in effectively using the post-war international situation and failed in transparency within the alliance itself, Sitrampalam said. 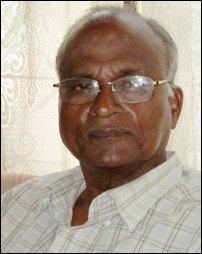 Prof Sitrampalam in his press address particularly criticized the TNA harping on the electoral politics based on the 13th Amendment and claiming that it is a ‘first step’.

The 13th Amendment was enacted with a judicial confirmation that it was not breaching the unitary character of State in the island. The provinces are just an extension of the presidential rule. It is unhealthy and there is no use in it. When the district councils were introduced [in the early 80s] then also the TULF alliance, including the ITAK, went into it saying that it was a first step. But it brought nothing, Sitrampalam who was then a supporter of the move conceded.

[The failed District Development Councils were introduced in 1981 under J.R. Jeyawardane regime, presumably advised by Prof A J Wilson and tacitly supported by the US Establishment. The 13th Amendment bringing in Provincial Councils was a result of the Indo-Lanka Agreement of 1987.]

The five parties in the TNA should have denounced the 13th Amendment and should have openly insisted on a full-fledged federal as an alternative to separate Tamil Eelam. But, even four years after a mass field sacrifice, the TNA has failed in categorically saying what we want and what is the draft for it, Sitrampalam said.

He was hinting at the ‘non-descript’ solution approach some TNA parliamentarians were parading after receiving instructions from the LLRC-harping USA, observers at the press meet commented.

On the TNA’s failure in leading a people’s struggle, Sitrampalam compared the 1961 non-violent mass struggle and said that now no people respond to any calls by political parties.

To lead a people’s struggle, the TNA parliamentarians should be first prepared to live in the land of struggle with their families, Sitrampalam said.

Thanthai Selva once said that a time would come for the world to know and respond to the struggle of Tamils – just like the World War II paving way for the independence of India – Sitrampalam, former senior professor of history and archaeology, cited.

When such an opportunity came, and while the matter has now been taken at the level of the UN, the TNA fails in cutting an appropriate profile and internationally spearheading the struggle in an effective way. Many of them lack political vision and clarity, Sitrampalam said.

In the press club address, Sitrampalam was also targeting the transparency-inner democracy situation in the TNA, particularly in the ITAK, in which he is a Vice-President of the Central Committee.

On the Coordination Committee formed recently within the TNA to keep the alliance together, Sitrampalam said that it was motivated only by an unimportant issue such as the question of contesting elections for the 13A-based provincial council.

The decision of forming the committee with 3 members each from the 5 constituent parties was taken without the knowledge of the ITAK Central Committee, Sitrampalam said.

In the past history of the ITAK, it was the Central Committee that used to take decisions on such matters. But, in recent times there is a style of functioning in which the parliamentary group is taking decisions. This is a blunder, he said.

In the given context of geopolitics and military-grooming approach of all the powers involved, the people’s struggle Prof Sitrampalam was referring to needs to be addressed at an international level, primarily against Washington and New Delhi, by the mobilisation of all the global Tamils. But at every sector, whether the diaspora, Tamil Nadu or the island, the leadership is systematically gagged, bound, manipulated, or diffused through grooming mediocrity by the age-old culprits implied by Prof Sitrampalam. The TNA is just part of the picture. The breakthrough has to be achieved at some point, commented Tamils for alternative politics in the island.