Citing moves to repeal the 13Th Amendment, public stand of Gotabhaya Rajapaksa in this regard and a recent meeting of Basil Rajapaksa with New Delhi, presumably to justify Colombo’s stand, the Tamil Nadu Chief Minister, Ms J. Jayalalithaa in a letter to New Delhi’s PM on Sunday urged India not to give in to Colombo’s moves to take away even the limited political rights of Tamils. Also citing the 2007 demerger of the North and East “as a sinister first step leading to the eventual abrogation and repeal of the 13th Amendment, which has starkly appeared on the agenda now,” Ms. Jayalalithaa’s letter implied her fear of New Delhi further collaborating with Colombo against Tamils in the island, political observers said. 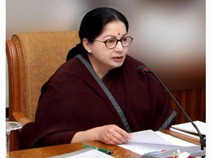 “The Tamil Nadu Legislative Assembly had passed a Resolution on 27th March, 2013, calling for, inter alia, a referendum on a “separate Eelam” amongst Tamils in Sri Lanka and Tamils displaced from Sri Lanka and resident in other countries. While the aspirations of the Sri Lankan Tamils can be realised only through a Tamil Eelam, the process of securing the right to self determination, through the devolvement of democratic decentralisation by the 13th Amendment to the Constitution of Sri Lanka, should not be jeopardised in any manner,” Ms. Jayalalithaa’s letter to Dr. Manmohan Singh said.

The very fact that how the 13th Amendment in a unitary constitution of the genocidal State could be jeopardized shows why the 13th Amendment should not be harped on by any shade of Tamil polity, Eezham Tamils activists for alternative politics in the island commented.

As the agenda of Colombo as well as New Delhi and Washington is the annihilation of the territoriality of the nation of Eezham Tamils in the island, the 13th Amendment process is just facilitation to the agenda, even though there could be small differences in the modus operandi, the activists said.

“India cannot afford to be a passive bystander at this juncture,” the Tamil Nadu CM’s letter said. But, had India been a passive bystander and not an active partner in the genocide, Eezham Tamils wouldn’t have faced their plight of today, the activists said, adding that in this regard the problem is not merely the Sonia Congress but the BJP too.

All the Establishments that were in complicity with the genocide only count on the genocidal Sinhala military. The process they have set is to finish the genocide to the end and is to absolve their crimes through that. None of them talk on the territorial integrity of the nation of Eezham Tamils in the island, which is the crux of the matter in finding solutions. Washington and New Delhi sit on Tamil polity everywhere, engineering and seeing that there will be no mass political struggle, the activists said.

Ms. Jayalalithaa has taken certain remarkably bold steps through the Tamil Nadu State Assembly in calling the genocide, the genocide, calling for international investigations of war crimes and in calling for a referendum among Tamils on the question of separate Eelam. But, unless a mass struggle of Tamils directly addresses the issue with Washington and New Delhi, progress will be found only in irreversible structural genocide. Tamil Nadu is crucial in bringing the breakthrough. Time after time, the Tamil polity cannot be reduced to the stage of saying ‘Pichchai vea’ndaam naayaippidi’ (you may not give alms but hold the dog), the activists in the island further commented.