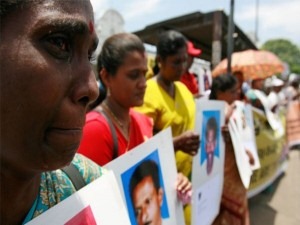 A panel of independent United Nations experts have begun investigating new or existing cases of disappearances in Sri Lanka and several other countries.

The UN Working Group on Enforced or Involuntary Disappearances met in New York to review under their urgent action procedure, 17 reported cases of enforced disappearances that have occurred in the last six months, as well as more than 400 newly reported or existing cases in more than 25 countries including Sri Lanka, a UN statement said.

The Group was established in 1980 by the UN Commission on Human Rights – the predecessor to the Geneva-based Human Rights Council – to assist families in determining the fate and whereabouts of disappeared relatives. It seeks to establish a channel of communication between the families and the Governments concerned to ensure cases are investigated.

In a news release issued at the close of latest session, the experts urged that efforts be strengthened to ensure prompt identification and qualification of cases of enforced disappearances, which is essential to hold perpetrators of this crime accountable.

“One by one, the disappeared will be reclaimed. The Working Group is the guarantor of this need and the keeper of this promise,” its Chair-Rapporteur, Olivier de Frouville of France, said.

He also noted that enforced disappearance is not an accident, but rather a “premeditated crime” that warrants punishment. (Colombo Gazette)