A place called Kanthasaami-malai in Thennai-maravadi village, along the narrow border of the Trincomalee and Mullaiththeevu districts of the North and East provinces of the country of Eezham Tamils, is under siege by the Sinhala-Buddhist monks, who have arrived from the South. They claim that Kanthasaami-malai area belongs to a historic Buddhist Vihara and want about one hundred acres of land to be handed over to them. They have made ‘representations’ to the occupying Sri Lanka Army to get these lands for a new construction of the so-called Purana (ancient) Buddhist Vihara. While such claims are made for the interior landward link at Thennaimaravadi, a Buddhist monk from the South has already appropriated 500 acres of land at the coastal link at Pul-moaddai for a Buddhist enclave. The land was surveyed for him by the genocidal State’s Survey Department.

What is significant is that such a delinking demographic and cultural genocide taking place with a hitherto unseen intensity at the border of the North and East, while there is an ‘elected’ provincial council in the East. It shows how the provincial council system under a unitary constitution will be a smokescreen for the completion of structural genocide, political observers said.

When 95 per cent of the local population is Tamil-speaking Muslim, the demographic genocide of Pul-moaddai takes place while there is a Muslim Chief Minister in the East.

For wedging the Tamils and Tamil-speaking Muslims who make the majority of the province, and to engineer an intimidated alliance of the Muslims and Sinhalese in the PC to smoothly carryout the structural genocide, the space and time were provided to the genocidal State especially by the USA and India, said Tamil activists for alternative politics in the island.

The policy of deliberately suppressing the recognition of the territoriality of the Tamil-speaking people in the island, followed by the USA and India, is the root cause of all the evils. The talk of New Delhi Establishment’s PM, Dr Manmohan Singh and the State Dept. officials of the Washington Establishment, on meeting the aspirations of ‘all people in a united island’ in an explicitly genocidal context, set the paradigm. As far as the evidences and ground realities go, they serve only the insatiable aspiration of the Sinhala Buddhist nation in seeing the annihilation of the Eezham Tamil nation. The ‘all people’ talk is actually the synonym for the genocide they carryout, but refuse to acknowledge by that term, the activists commented. 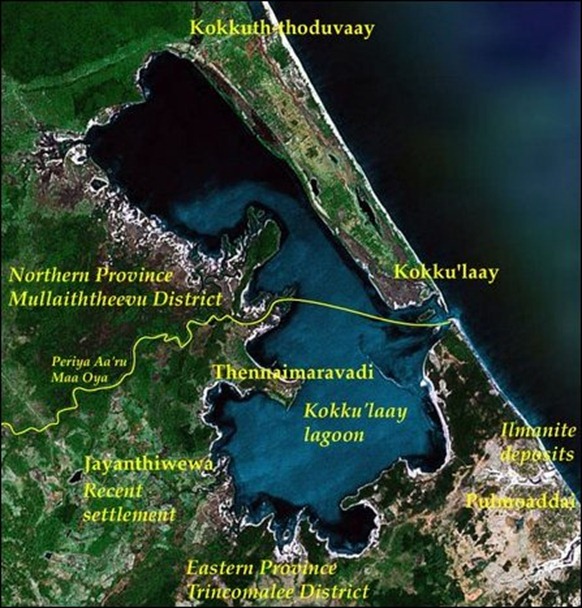 Note the location of Thennai-maravadi in the interior and Pulmoaddai in the coast along the border of the Northern and Eastern provinces. [Satellite Image Courtesy – Google Earth. Legend by TamilNet]

Thennaimaravadi was the seat of a Tamil Vanni chieftaincy until the Dutch times. The Thennaimaravadi chieftain was appointed and conferred with his title by the administration of Jaffna Patnam.

The traditional Tamil village was the scene of intense pogroms against the local population in 1958, 1977 and in 1983, and Sinhala colonization activities in 1984 conducted by the Sri Lanka Army (SLA) in a planned attempt to drive a wedge in the contiguity of the Tamil demography of the North and East.

With the appropriation of Kanthasaami-malai area, the entire Thennaimaravadi village is in the danger of being swallowed by Sinhala chauvinist elements with the backing of the occupying Sri Lanka Army, the sources said.

Thennaimaravadi was the first Tamil village where people were completely displaced in the Trincomalee district following the SL state-sponsored anti-Tamil pogrom in 1983, which is known as Black July.

At that time more than two hundred Tamil families were living in the village, divisional secretariat sources said.

Hundreds of families fled when soldiers of the Sinhala dominated Sri Lanka Army assisted by Sinhala home guards entered into Thennaimaravadi on 1st of December 1984, from the nearby Sinhapura, one of the new Sinhala settlements which is located close to the Thennaimaravadi village under the SL-state aided colonization scheme after the island gained ‘independence’ from the British.

On the first day of the attack, on 01.12.1984, five Tamil villagers were shot dead by Sri Lankan army soldiers and home guards. Immediately, rest of the village fled into the jungles to save their lives.

When the Tamil villagers returned to their homes, the Sinhala soldiers had again rounded them up and shot them. Altogether at least thirteen Tamil villagers were shot dead by the army and home guards.

On December 4, hundreds of families who fled to the jungle second time had started their journey with available belongings leaving their cattle and other valuable articles in their homes towards Mullaiththeevu district.

Even now, Thennaimaravadi displaced families live at “Ponnakar” in Mu’l’liyava’lai, awaiting resettlement in their own village, according to the representatives of the uprooted Tamils in Mullaiththeevu.