The student uprising in Tamil Nadu, which erupted in the wake of the pro-LLRC US resolution tabled at Geneva in March, strongly stands for a referendum for Tamil Eelam said V. Vettrivel Chandrashekar, the director of the recently released documentary on the student protests ‘A’rappoar’, urging Tamils across the world to remain firm on the demand. In an interview to TamilNet, Mr. Vettrivel, talking about the need to document the historically and politically significant students’ uprising, also spoke about the positive influence the Tamil Nadu students’ movement had on regional and global Tamil politics. Referring to the London event in early July by diaspora youth ‘Seeking Perception sans Conditioning’, he said that the Tamil Nadu and the diaspora youth stood in one political line as regards the question of a referendum.

A’rappoar, a documentary based on the Tamil Nadu student uprising that challenged establishments’ abetment of the genocide of the Eezham Tamil nation, was written and directed by V. Vettrivel Chandrashekar and produced by C. Kabilan from Senkodi Media Works. It was released in Chennai on 28 July. 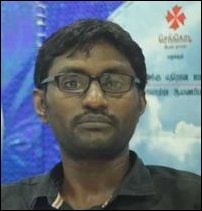 “The students’ uprising, besides creating impact in Tamil Nadu, has roused spirits in countries where Tamils reside. The demand of Tamils from Tamil Nadu and Tamil Eelam for an independent Tamil Eelam has raised a question in the international fora and has convinced genuine activists for humanity and human rights that Tamil Eelam is the only solution,” Vettrivel said.

The DMK had to pull out of the Congress front and the AIADMK’s TN assembly had to pass a resolution supporting the call for Tamil Eelam owing to the student protests, he said.

The purpose of his documentary was to record for posterity the historically and politically significant students’ uprising.

The students’ movement that began in March will not subside. It will continue by also challenging the 13th Amendment as a solution for the Eezham Tamils within a unitary state is not feasible.

“The Tamil Nadu students who demonstrated to the world by challenging the US resolution, will also challenge the 13th Amendment and create more mobilizations in the world,” he said.

The students will also protest against CHOGM being held in Sri Lanka and India’s participation in it as it would give legitimacy to the genocide-accused Sri Lankan President Mahinda Rajapaksa.

Referring to the London event ‘Seeking Perception sans Conditioning’, he opined that the Tamil Nadu and the diaspora youth stood in one political line as regards the question of a referendum.