How do we save national struggles from decimation and structure these struggles as people-centric? This is the uppermost question we have to address in right earnest, observed, Mr Saba Navalan, the editor of inioru.com in the UK, in reading a paper on Sri Lanka’s case study in the 21st century’s movements for self-determination, at an EU-level conference convened by IBON International that took place in the European Parliament last Monday. According to Mr Navalan’s observations, an obstacle in the realization of self-determination is that the upper layer of each ethnic group is held by pro-imperial forces and despite having fundamental contradiction, the upper middle class, in the absence of national capitalism, is comfortable about its association with the pro-imperial class. 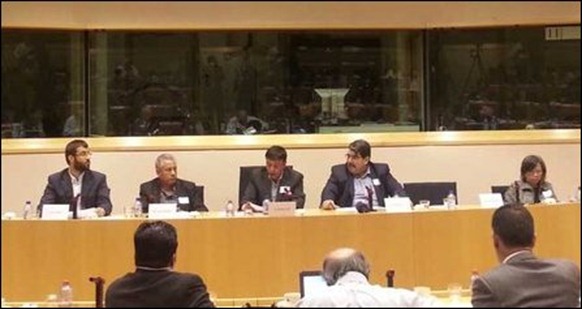 Mr Saba Navalan addressing the ‘Conference on Democracy, Self-Determination and Liberation of Peoples’ held at the European Parliament complex in Brussels on 23 September, 2013.

The struggle for right to self-determination is closely associated with anti-imperialism. But in the case of the struggle of Tamils in the island, all their liberation movements were somehow associated with the major imperial powers, which historically destroyed national struggles in various parts of the world. How this is possible? How those fundamentally contradictory forces collaborate with each other, Navalan touched on a question still unaddressed by the incumbency leadership of Eezham Tamils, while facts clearly show who are the ultimate adversaries and where the struggle has to be addressed at now.

“The new generation of the oppressed ethnic groups recognizes the struggle of those fighting for self-determination in Kurdistan, Kashmir, Nagaland, and Baluchistan, which was not the case during the past 30 years of war. Thus, the powers, which targeted the self-determination struggle, have inadvertently helped the innocent people learn lasting and valuable political lessons,” he further observed.

The IBON conference was on Democracy, Self-Determination and Liberation of Peoples. Two MEPs of European United Left–Nordic Green Left and the Greens/ European Free Alliance have supported the initiative.

The conference call cited the proclamation of Universal Declaration of Human Rights, 60 years ago; 1976 Algiers declaration stressing on collective rights and the right to fight for liberation by peoples under foreign or local oppression and the1986 UN General Assembly approval on the collective rights, and has said that today these rights are in danger. However, the conference call was carefully avoiding the word nations.

PDF: Details of the Conference on Democracy, Self-Determination and Liberation of Peoples

While pro-imperial upper layer and collaborating upper middle class are impediments in leading the Tamil struggle in the anti-imperialist direction, certain ‘socialist’ sections that are no less different from the imperialists in harping on a ‘united Sri Lanka’ for their own ‘geopolitics’, are also equally an obstacle, commented Tamil activists for alternative politics in the island, citing at a recent article in the World Socialist Web Site by Mr K. Ratnayake that appeared on 31 August.

Mr K. Ratnayake of the Socialist Equality Party of Sri Lanka, who was responding to a TamilNet feature of 1st July by a Tamil activist for alternative politics, was challenging a statement in the feature saying that “Mr Ratnayake, who overlooks the Tamils’ struggle for sovereignty resisting genocidal occupation of their homeland by the GoSL, is consciously or unconsciously defending the state structure that he claims to criticize.”

“The SEP rejects the claim of the Eezham activist that the failure to support the demand for a separate Eelam means support for the unitary genocidal Sri Lankan state,” Ratnayake said.

“The Eezham activist, TamilNet and the various Tamil bourgeois parties can keep peddling the lie that some form of self-determination or a separate capitalist state is the sole solution for Tamils, only by maintaining a complete silence on the political lessons of the war,” he accused.

Talking of a “fight for socialism in Sri Lanka and internationally,” Ratnayake was harping on a “revolutionary struggle to establish the socialist Republic of Sri Lanka and Eelam.

What is the ideological justification for keeping the island as one unit in the struggle for socialism, when the manifestations of oppression faced by Eezham Tamils and Sinhalese are identifiably and provably different in the island for several decades now, the Tamil activist asked.

It is for the imperial powers of geopolitical greed, the foremost agenda is to keep the island as one unit, whatever the cost may be – even if it is genocide. Do the ‘socialists’ also have the same ‘geopolitics’ in their outlook for bringing in ‘World Socialism’; asked the activist.

The Tamil National Alliance and other parties are lining up with US imperialism as it prepares for conflict against China after a decade of brutal neo-colonial war in Afghanistan, Iraq, Libya and Syria, Ratnayake observed.

He may be partly right about the gagged and hapless ‘bourgeois’ politicians of Tamils, who may be taking that line hoping for at least crumps to come out of it. But why should they worry about the Establishment in China, the activist asked.

Ratnayake traces the origins of anti-imperialism of socialist and internationalist perspective in the island to Trotskyist Bolshevik Leninist Party of India in the 1940s. The origins of Left movement among Eezham Tamils were much earlier than that. There were a series of occasions for Eezham Tamils to steer the course of their struggle with a Left orientation.

But every time it was thwarted and discredited within the Tamil public by the Left in the South refusing to see Tamils as a nation, by they harping on one socialist State that would ostensibly and automatically give the leadership to ‘majoritarian socialists’ and by the endorsement this brand of Leftism was getting from the then international godfathers of socialism or communism.

The World Socialist Web Site has not changed in any way from that ‘heritage’, even after seeing how the one-State policy of both the bourgeois imperialists and social imperialists has led to the genocide in the island. It will not change either, if the priority of ‘socialist geopolitics’ too is to provide space for the one-State mania of majoritarianism in the island, the Tamil activist commented.