Indian External Affairs Minister Salman Khurshid, who visited Jaffna on Tuesday, ceremonially opened two houses of the controversial ‘50,000 House Project’, by visiting Thanthai Chelvapuram village at Thellippazhai in Valikaamam North, after landing in Palaali, meeting SL military officials and paying tribute to slain Indian soldiers in the war 23 years ago. Mr Khurshid then proceeded to lunch with the war-crimes accused Sri Lankan colonial governor in North and thereafter met the Chief Minister of Northern Provincial Council. Salman Khurshid, addressing the beneficiaries of financial asssistance and the journalists at Tilko hotel was talking of devolved Sri Lanka under the 13 Amendment, for a happy, prosperous and tri-lingual Sri Lanka which is sovereign and united and connected with India. 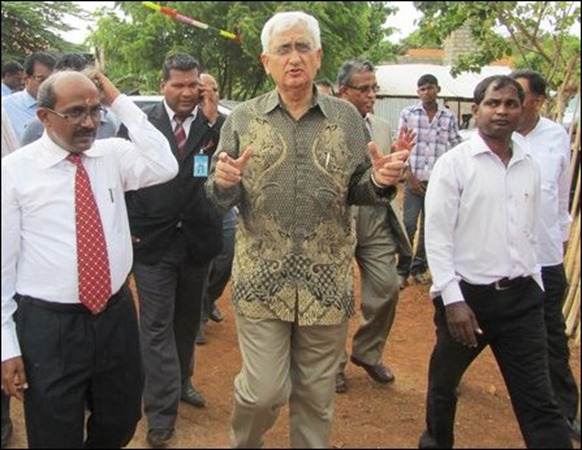 He was also talking about India’s plan to technically assist 10-year national project of “Tri-lingual Sri Lanka” [This is based on Sri Lanka’s LLRC although the Indian minister didn’t mention the name LLRC in his address].

A “friendly, sovereign and united Sri Lanka was the vision that all we have,” he reiterated.

“I consider myself very lucky that this visit coincides with your successful elections of the NPC and the oath that was taken yesterday by the Chief Minister who will serve you and who will be your symbol of the aspirations and who will help in the process of reconciliation and reconstruction and growth and prosperity for all the people,” the visiting minister was telling the journalists in Jaffna.

“I urge, hope and expect that your representative, the chief minister, ministers – all your representatives – will work in collaboration and cooperation and closely in dialogue with the federal government – with the government of Sri Lanka- to bring about satisfaction and happiness to the people of this region and this province commensurate with their aspirations and desire to live a life worth of dignity and equality, of justice and self-respect, under a devolved and reconstructed constitutional provisions that we describe in short as Amendment 13, but reflecting on the true consensual dialogue of the people of this province with other citizens and establishments of this country,” he said while concluding his address.

(The New Delhi Minister used the word “federal government” for the unitary Colombo India worked out through the 13th Amendment. Some Indian media also nowadays chooses to use the empty word to hoodwink the public)

In his address, Mr Khushid claimed that the Northern Railway line project was progressing, and that the Yaazh Theavi Express would resume services by 2014.

Seaward connectivity would be restarted with the ferry service between Thalai-Mannaar and Rameswaram, he said noting the assistance by India to develop Thalai Mannaar pier.

The dredging process of KKS port is done with Indian assistance and this will allow for greater growth of the economic activity, he claimed.

Palaali airport is being developed into a full-fledged civilian airport with regional connectivity, he claimed.

“We have made landmark agreements and MOUs for Champoor Power Project,” he said adding it was “for the benefit of all citizens including you”.

“I hope that all this will ensure working that we want to do for you is to bring you happiness and bring you an opportunity to take advantage of the important position that you have between Indian and Sri Lanka,” he said adding that “the situation that you have is a critical situation of great importance from the point view of commerce, tourism and many other fields.”

On the burning issue of fishermen, he came with the following remark: “We have also agreed that representatives of fishermen from both sides, from India and from Sri Lanka, will come together very soon to find resolution to this constant irritant that comes on the livelihood.”

During his visit to Jaffna, Mr Salman Khurshid was particular in conveying through the visiting Indian journalists who are present in Jaffna, an image of India as the major assistance provider to the war-affected Eezham Tamils.

The visiting minister in Jaffna described the housing project as the “largest grants assistance programme that government of India has undertaken anywhere in the world and how happy it made the families who were able now to receive the certificates of their completed houses in which they will live happily.” He mentioned that 1,000 houses have been completed so far. Claiming that 16,000 houses were under various stages of their construction, and gave a new deadline for the completion of the 50,000 before the 2015.

It has almost become a habitual show, since the 27 November 2010 visit of the previous Indian External Affairs Minister SM Krishna, to declare open one or two houses every time an Indian official or politician visit North. But, the housing scheme has gone through a lot of controversies and is progressing at a snail’s pace from its inception.

When many countries were prepared to assist the uprooted people with constructing houses after 2009, India rushed with its announcement of constructing 50,000 houses, ousting others from the scene. Initially, Indian contractors were hired to put up the houses. The project went very slow even after spending 550,000 Indian rupees for constructing each house which was budgeted at 550,000 Sri Lankan rupees.

The houses constructed were of poor quality and some of these houses were damaged even before they were declared opened. As the delivery was very slow and the quality of the houses were not to the standards, the Indian authorities decided to give the allocated money, 550,000 SL rupees to the chosen beneficiaries to construct the houses. But, the beneficiaries ended up with borrowing money to complete the houses that cost around 1,300,000 each. 90% of the recipients are still on waiting list and the management by the Sri Lankan Red Cross (SLRC) chosen to oversee the project has come under criticism.

Each house consists of two rooms, a kitchen and an outdoor toilet. The kitchen doesn’t have enough space to accommodate two people, the beneficiaries complain.

The visiting Indian External Affairs Minister also provided micro loans, promised long ago but not delivered hitherto, to a few selected recipients during his visit.

Scores of villages have been appropriated by genocidal Sri Lanka to create a Sinhala Military Zone in the neighbourhood of the housing scheme opened by Salman Khurshid on Tuesday and the New Delhi government never raises a finger about it.