“Sri Lanka has got a lot to answer internationally in actually accepting an investigation into the atrocities. We don’t think that the CHOGM should be happening in Colombo, because it is like an almost condonation [of Sri Lanka],” said Margaret Owen, the director of Widows for Peace through Democracy (WPD), 3 months ago at a conference held in London by the Centre for Community Development (CDC). “Could we talk [on Sri Lanka] to the Foreign Office, whom we are in discussions with the whole time on revising the UK national action plan,” Ms Owen said she had asked her group. The response from the members of her own group was that even attempting to mention Sri Lanka to the FCO may blow everything else the group was working with the British FCO. “That is the attitude, I am afraid at the moment. The UK doesn’t feel it can get involved.”

In her address, Ms Owen advised the activists to keep on their pressure on the British government.

“And yet, right here now, my government is actually appealing against a High Court decision, which blocked the deportation of those failed Tamil asylum seekers. Several of them who are women and several of them are rape victims. We know what human rights reports say on what happens to people when they go back to Sri Lanka. What is happening?

“So, we do have to keep on the pressure on my country. I know it is quite difficult. I was at a meeting of my GAPS on Wednesday and day after I came back from Geneva, again I brought up the issue of 1325 and no national action plan in Sri Lanka. Could we talk to the Foreign Office, who we are in discussions with the whole time on revising the UK national action plan? And my group there said ‘don’t even try to mention Sri Lanka, it will blow everything else we are working on.’ “That is the attitude at the moment. The UK doesn’t feel it can get involved.”

“Actually, we think that Sri Lanka should be on the list of countries for whom they don’t give a licence to sell arms. You shouldn’t be selling arms to a country where the government breaches the human rights of its own citizens,” she said. 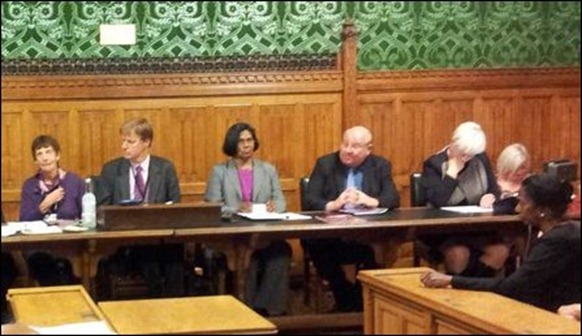 CCD’s report on war widows was launched on Wednesday, 16 October 2013, at House of Commons. The event was chaired by Mr Stephen Timms, MP for Eastham.

Margarat Owen, who has been working as an advocate for the status of women’s issues since 1982, is a Human Rights barrister, member of the Bar Human Rights Committee, founder of GAPS-UK (Gender Action on Peace and Security) about [UN Security Council Resolution] 1325. Margaret’s work, since 1994, has been specific to the status of widows in developing countries and she is now the director of Widows for Peace through Democracy (WPD).

GAPS has been actively involved in establishing South Asian Network for Widows Empowered through Development (SANWED).

Addressing the London conference, held on July 21, 2013, Ms Owen also noted that the GAPS was trying to work with one NGO, which is the Sri Lanka chapter of SANWED to get a conference going in Sri Lanka with the group of all widows. “I wouldn’t go back until our partner there will say that it will be about all the widows,” she said. 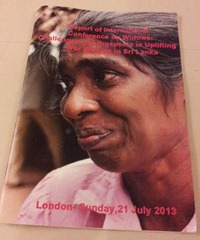 Observing the mechanisms found in the International Law, especially under the UN system, Ms Margarat, who has been championing the cause of the widows and Maggie Beirne, formerly of Amnesty International and the Committee on the Administration of Justice (CAJ), were of the opinion that all avenues to seek justice must be properly utilized.

“The first of course is the UN Convention on Elimination of All Forms of Discrimination against Women (CEDAW), which the Government of Sri Lanka has not only ratified […] It has also ratified the optional protocol,” Ms Owen told the gathering.

“Widowhood is such a neglected issue. It’s utterly scandals that it is being so neglected by the international community, by the UN and by governments.

But, ultimately, although I applaud the incredible things that all your NGOs are doing in Sri Lanka, in the North, and also the ones that are here like your Tamil Information Centre here — all the very interesting meetings I have been to in London, ultimately, it is governments that must be made responsible, it is governments that have to be asked to address what is happening to widows. Have they even counted them? Do they even know who they are? What are their ages? What are their coping strategies? What are their social support systems? What do they know about what sort of violence? How can they access to justice to get their rights to inheritance to land? And, what are governments doing to get rid of the terrible stigma which makes the widows so vulnerable to violence?”

“The first of course is the UN Convention on Elimination of All Forms of Discrimination against Women (CEDAW), which the Government of Sri Lanka has not only ratified […] It has also ratified the optional protocol. This never mentions widows, but every one of the 16 articles of the CEDAW is relevant to widows.”

“This is the Widow’s Charter. […] The Widow’s Charter, which is based on the CEDAW, but it is all re-written in the context and framework of widowhood. We call it is a draft because it is still to be adopted by the governments to their particular frameworks and cultures — they can add to it and modify.

“I met Shanthi [Sachchithananthan] in Pakistan early this year. In South Asia, unlike Africa and the Middle East, we have actually now setup something called SANWED: the South Asian Network for Widows Empowered through Development.

“What I really want to say is that widows have to have their own voice. And it has to be a very strong collective voice. There is no way that widows can actually articulate their collective needs, say what they do. Widows aren’t just victims. Never think of widows as victims, exclusively. They are not just victims. Widows are key players, crucial players in their countries’ development, that is the economic and social life of the country.

“And so, they got to have their own voice in which they can say what is happening to them, they can say what they want, and they are organising themselves so that they can actually access the sort of training that would help them to participate in decision-making at all levels.

“And, when we say at all levels I mean for example they could then participate in peace-building activities such as they have done in Nepal where the widows groups are represented in the meetings about implementation of UN Security Council Resolution 1325.

“In Sri Lanka […] something like 100,000 young widows among the Tamil women, and I don’t know, how many women there are who don’t know what happened to their husbands.”

“As I read […] I am learning about what is happening in Sri Lanka today: how absolutely horrible, absolutely ghastly the government of Sri Lanka is and the sort of lies it tells. And every time I meet when I travel — I meet a High Commissioner or Ambassador for Sri Lanka — they attack me and say that I am a victim of propaganda of the BBC that tells ‘lies’.

“And that they even said to me in Bangkok last August ‘Mrs Owen, there is no such things as Tamils anymore, we are all Sri Lankans’.

And, of course, they have done nothing to ratify 1325.

I have just come back this week from Geneva, where I have been presenting to the Committee of the Convention on Elimination of All Forms of Discrimination against Women (CEDAW). I have been presenting to them on widowhood, trying to get from the CEDAW a general recommendation, which then will go out to governments that have to address widows. That is in the pipeline. What they have asked me to do — I am talking to Shanthi and all of you now.

Maggie Beirne addressing the session on ‘Action at the UN level’ at the international conference on widows held on 21 July 2013 at the School of Oriental and African Studies (SOAS) in London. The session was chaired by Yvonne Terlingen, formerly Amnesty International’s representative at the UN in New York

Under Article 8 of the Optional Protocol of the CEDAW, there is an enquiry process. This means that NGOs – we have to work very hard – we have done it for Tanzania and we are about to do it for Ghana. We are going to do it now for Sri Lanka. We are going to ask the CEDAW of an enquiry of the Sri Lankan government about what it is doing to address widowhood in its country. And by this we mean we are all thinking here about the Tamil widows, there are also the Muslim widows and let’s say there are also Sinhalese widows. It is all about widowhood. But of course within that we will be asking and actually issue a report giving a lot of information about how the rights of the Tamil widows are being violated by the government of Sri Lanka, because they have not done anything to find out, listen to what the widows want and they have done nothing for example to help them access the justice they have a right to, under 1325, and under the CEDAW and under our Charter. They have a right to information, about what happened to their loved ones. So many people, who are disappeared or tortured.

“And there are all sorts of other UN mechanisms. I have got a partner in Southern Sudan, the newest country in the World, where we are using the UN Fund on Contemporary forms of Slavery. Contemporary forms of slavery includes forced marriage and all sorts of domestic slavery, sexual slavery and slavery as an agricultural worker. And, I am sure that these are sorts of things that are happening in your country as well. We know that widows are being trafficked. You haven’t talked about it in this long day, but we know we have very disturbing reports of how the sexual exploitation of many young women, namely young widows, who are on their own and about the trafficking both within the country. […] I was also given reports about how women are being trafficked to work in brothels, which are being served by the security forces and the women who are being trafficked in the Gulf States.”

The UN Resolution 1325 on women and peace and security adopted almost 13 years ago, calls on UN member states to "ensure increased representation of women at all decision-making levels in national, regional, and international institutions and mechanisms for the prevention, management, and resolution of conflict."

The resolution reaffirms the important role of women in the prevention and resolution of conflicts, peace negotiations, peace-building, peacekeeping, humanitarian response and in post-conflict reconstruction and stresses the importance of their equal participation and full involvement in all efforts for the maintenance and promotion of peace and security.

Resolution 1325 urges all actors to increase the participation of women and incorporate gender perspectives in all United Nations peace and security efforts. It also calls on all parties to conflict to take special measures to protect women and girls from gender-based violence, particularly rape and other forms of sexual abuse, in situations of armed conflict. The resolution provides a number of important operational mandates, with implications for Member States and the entities of the United Nations system.

The SL State has not ratified the UN Resolution 1325.