Colombo’s ‘National Housing Development Authority’ (NHDA) and the Cvil Military Coordination Office (CIMIC) of the occupying SL military in Jaffna have been jointly engaged in legalising the Sinhala occupation of the strategic entrance to Jaffna city at Naavat-kuzhi this week. The NHDA and CIMIC have been distributing lands to 126 Sinhala families that have been occupying the public lands at Naavatkuzhi under the security of SL military despite the protest by the Tamil residents and refugees still struggling to resettle at the locality. Naavatkuzhi is a place just 5 km east of Jaffna city where the two highways A9 and A32, the only existing land arteries that lead into Jaffna from the south and the western coast meet.

Similar to the Vanni war, genocidal Colombo is now hurriedly engaged in a colonisation war against the unarmed and demographically weakened nation of Eezham Tamils. India and USA, which labelled the former as war against terrorism now smokescreen the latter as ‘reconciliation’ and ‘post-war development’. Shown in pink is the targeted area for industrial and fisheries colonisation. The yellow circles are the major SL military colonies. [Map by TamilNet]

Sinhala extremist forces from South and the occupying SL military with the backing of the colonial military governor of Colombo in North have already provided housing and other assistance to the Sinhalicisation of Naavatkuzhi.

However, the Sinhala occupants need the clearance from Chaavakachcheari PS, the civic body in Thenmaraadchi, in order to obtain certain facilities such as electricity link.

Therefore, the NHDA and CIMIC have hurried the process of legalising the settlement by ‘officially’ dividing the public lands into 50 plots and granting them legally to the Sinhala settlers.

A military base has also been established at the at Kathithadi – Naavatkuzhi junction to provide security to the settlers, who have been occupying the lands for more than 3 years now.

Tamil people were chased out from the area in 1996 when the Jaffna peninsula was completely occupied by the SL military. Before that the LTTE had given the lands to landless people at the locality.

The Eezham Tamils who inhabit the areas since ancient times are living in temporary huts. 300 Tamil families, without proper basic facilities are living at low-lying lands near the site facing floods every year during the rainy season.

On Tuesday, the Tamil refugees staged a protest against the move to legalise the illegal settlement of Sinhalese. When journalists went to the site, the occupying SL military chased them away. Tamil National Alliance (TNA) parliamentarian S. Sritharan and civic council members of the TNA joined the protest.

The occupying Sinhala military is guarding the strategic junction and has imposed an unofficial identity control to enter the lands that have been occupied by the Sinhala settlers. 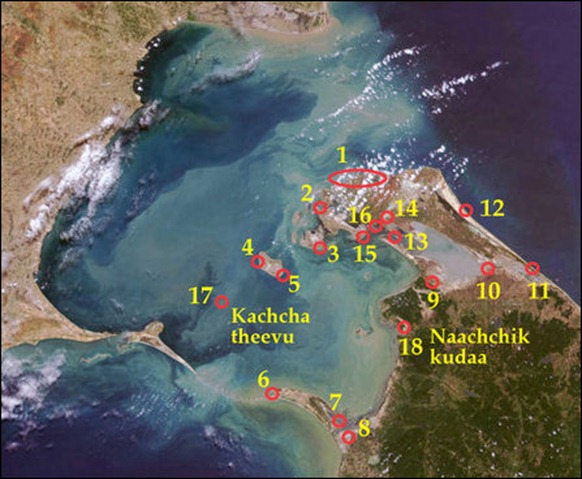