Indian State now consolidates a policy that extraordinary political movements of mass basis, coming from peoples long exposed to social oppression, material deprivation, un-freedom and stark poverty in India, have to be eliminated with the deployment of an increasing number of armed forces. The more the forces are special and armed-to-the-teeth with impunity, the more they are effective, is the policy outlook. “The establishment’s view is that over a period of time, this strategy, notwithstanding its viciousness, has paid rich dividends and must be persisted with. The decimation of the LTTE in the summer of 2009 in Sri Lanka has served to consolidate this view,” says an October 2013 publication of the Human Rights Forum based in Andhra Pradesh. 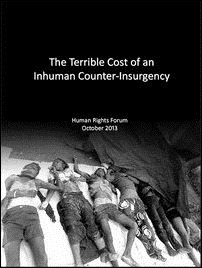 The HRF publication, “The Terrible Cost of an Inhuman Counter-Insurgency,” was reporting on the war the Indian Establishment is waging in the Adivasi territories in India.

“When the State was called upon to recognize that Naxalism had a social base, it would refuse to do so. This is because such an acceptance would mean that the State will then be conceding that it is a political movement with a base among the people. This it is not willing to do.”

“However, in the State’s counter-insurgency strategy it does recognize that the Naxalite movement has a support base among the people. And this is precisely what it targets and seeks to brutalize to a point where the people themselves reject the militancy that speaks in their name.”

“The intention is clearly to isolate the armed squads of the Naxalites and then finish them off. This is not a novel method that the Indian State is employing but a strategy that is common to counter- insurgency operations worldwide. What the Indian State seems to have convinced itself after the military decimation of the LTTE by the Sri Lankan State is that this policy can succeed here as well,” the HRF publication said.

The HRF report, generally bringing out what is now witnessed in the Indian States of Chattisgarh, Maharashtra, Orissa, Bihar, Jharkhand, West Bengal and parts of Andhra Pradesh, was specifically focussing on South Chattisgarh and bordering Andhra Pradesh.

The region is a home for a number of Dravidian-speaking aborigine tribes. New Delhi Establishment’s onslaught strategy on these peoples has a cultural dimension too, partly based on Hindi-Hindutva implementation through the newly created State of Chattisgarh.

While the affluent Dravidian brethren in further south are not responding at least in linguistic-nationalist sentiments to voice for the plight of these peoples facing an imperialist onslaught, ironically it is a New Delhi Minister elected from Tamil Nadu, Mr P. Chidambaram, who has had a hand both in the genocide of Eezham Tamils as well as in declaring Eezham model ‘counterinsurgency’ war in the tribal belt of India.

The HRF publication was disproving the claim that the war in the tribal belt is fought for the ‘development’ of the people concerned.

“The horrific crimes they committed had driven terrified adivasis in their thousands across the border into AP. As well as creating severe humanitarian problems, this large-scale forced displacement has also severely threatened the cultural viability of the indigenous peoples of the region, who depend on their local lands for sustenance and survival.”

“That is why the statement by former Union Home Minister Chidambaram in the initial days of the massive launch of security forces (referred to as Operation Greenhunt in the media) in this region that their "intention is to usher in development in these areas after re-establishing the rule of law" sounds utterly hollow. Scheduled V areas where the Maoists have no presence, and there are many such vast tracts, have never seen a whisper of development. Yet, this hypocrisy by a senior minister is taken by most otherwise intelligent and sensitive commentators as gospel truth,” the publication said.

For the first time in South Asia’s recent history, when the New Delhi Establishment perpetrated a genocide paradigm of imperialist inroad on the question of Eezham Tamils, many in India didn’t realize or were deliberately kept in dark about its consequences, thanks to the mainstream media and the so-called intellectuals in India, commented Tamil activists for alternative politics in Jaffna.

Those who read the HRF report on Chattisgarh could find out the identical ways, in which the Corporate Imperialist War of New Delhi is fought against Eezham Tamils as well as against the small nations in India.

The HRF report says, “The silence that follows this acceptance [Chidambaram perception of development through counterinsurgency] is precisely the social legitimacy that the government needs for its brutal counter-insurgency campaign.”

“Human Rights Forum feels strongly that society must speak out against this violence being inflicted on the poorest of the poor,” the publication said.

Unless peoples of India realize the seriousness of the test case of Eezham Tamils and articulately come forward in teaching a lesson to New Delhi on the independence of Eezham Tamils, the domino effect of New Delhi’s ‘experiment’ on Eezham Tamils afflicting the peoples of the entire region can’t be prevented, the activists for alternative politics in Jaffna commented. 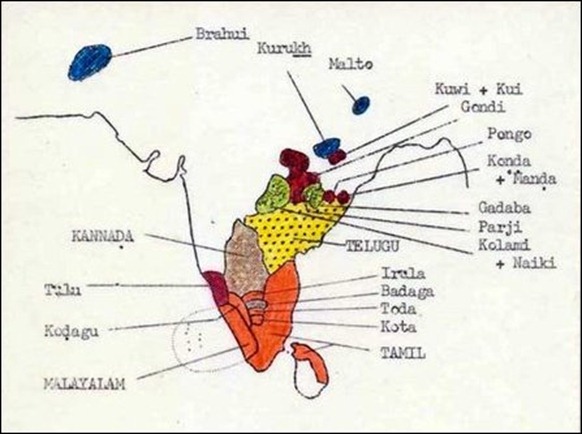