British Establishment’s Prime Minister David Cameron hurriedly convened a meeting of handpicked Tamil articulators in London on Thursday evening to showcase that the diaspora has compromised with his participation at the Sri Lanka-CHOGM. The British effort seeking ‘Wigneswarans’ in London to ‘legitimise’ the CHOGM participation was also aiming at relieving the New Delhi Establishment from the mounting pressure in Tamil Nadu, Tamil political observers in London said. A couple of hours before the meeting, a diaspora media in London published the ‘opinion’ of the PM on his CHOGM participation. The meeting ended with a ‘photo session.’ 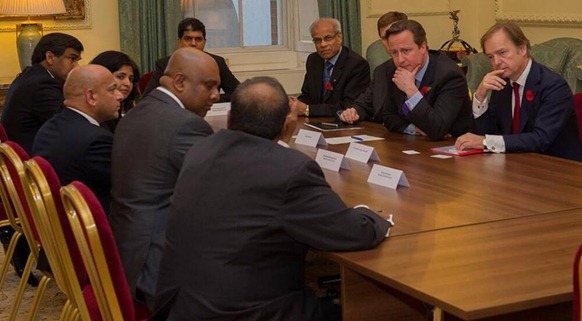 In influencing Tamil opinion, while media in the West was highlighting Cameron’s visit to Jaffna on the sidelines of the CHOGM as the first ever visit of a foreign head of government, Cameron at the meeting with the select diaspora members on Thursday provided space for pro-Establishment Tamils to campaign on the possibilities of UK seeking international investigations on the war crimes.
At his meeting with the British Tamil groups, Mr Cameron had initially told the members that he was calling for an ‘international investigation’. However, an official present beside him was quick to pass a note to him, upon which he corrected it by saying that he was calling for ‘independent investigation’, GTF spokesman Suren Surendiran told journalists present outside the PM’s residence.
In the meantime, a report by AFP quoted a Downing Street spokeswoman as saying: "We have consistently called for an independent inquiry into the allegations. To date, that has not happened. And the prime minister believes that in the absence of an independent investigation, an international inquiry would be needed."
The above quote to AFP is intended as clarifying to Colombo that there is no change in British PM’s stand, and at the same time is intended to show mirages to gullible Tamils, grassroot political activists in the UK told TamilNet.
What the British government wanted was a photo session and a message that it was ‘engaging’ Tamils, as there was concern at certain quarters that Tamils were appalled at Brtain’s geopolitical game of backing the Sri Lankan State, the activists said.
But what was really appalling was the naivety of certain diaspora sections at the meeting, the activists said. Some of them who were making articulating statements and protests calling for the UK to boycott the CHOGM were coming out with petty suggestions on what the PM should do on his visit, the activists cited.
Except the TAG-UK member at the meeting who openly criticized the ‘engagement’ approach of the British PM as continuing to allow the Sri Lankan State to proceed with demographic changes, ethnic cleansing etc., the representatives of the Global Tamil Forum and the British Tamil Forum, talking to journalists at the Downing Street were mostly consoling themselves by telling that the British PM had watched the latest Channel 4 video and that he had observed that the crimes documented there were ‘appalling’.
A BTF representative said he had suggested the PM to visit Valikaamam North and the public library of Jaffna. Another member wanted the PM to visit Mu’l’livaaykkaal.
“This is actually what the FCO and the Downing Street wanted Tamils to project,” the political activists further said expressing dismay at the behaviour of the BTF, which is the only organization with mass appeal among those who were present at the photo-session with the British PM.