The Permanent Peoples Tribunal (PPT) in Rome has announced the names of 11 judges, who would be hearing the long-awaited case on the accusation of genocide against Eezham Tamils to be heard by an independent panel. “Like in the first session, a respected panel of judges consisting of experts in Genocide studies, former UN-officials, experts in international law and renowned peace and human rights activists will hear the evidence that is presented and make a determination,” a press statement signed by Mr Gianni Tognoni, the secretary general of the PPT, stated. The first session held in January 2010, known as the Dublin Tribunal, was the first independent international undertaking that recognised the need to look into the case of genocide in the island of Sri Lanka. The second session is to take place between December 07 -10, 2013 in Bremen, Germany.

Since then, the PPT has approved the submission of the Germany-based International Human Rights Association Bremen (IMRV) and the Irish Forum for Peace in Sri Lanka (IFPSL) that substantial new evidence necessitate a second round of investigations to determine whether Genocide has been and is being committed against the Tamil people in Sri Lanka. The plaintiff organisations have also accused India, UK and the USA for orchestrating the genocide on Eezham Tamils.

In the first session held in 2010, the Dublin tribunal found Sri Lankan government "guilty of War-Crimes" and "guilty of Crimes Against Humanity." Eye witnesses included several escapees from the final week of the genocidal onslaught on the "No Fire Zone" in Vanni where thousands of Tamil civilians were slaughtered by the SL military.

In the meantime, the representatives of the plaintiff organisations, Nicolai Jung (phone: 0049 177 406 2220, email: [email protected]) of the IMRV Bremen and Jude Lal Fernando (phone: 00353 851 56 2980, email: [email protected]) of the IFPSL Dublin, told TamilNet on Monday that those who wish to attend the event could contact them by email or fax to register themselves with the organisers, before midnight Thursday 05, December 2013. 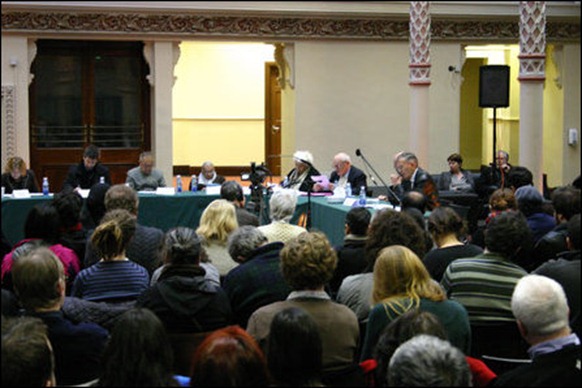 Following are the names of judges selected by the PPT:

José Elías Esteve Molto, international lawyer and legal expert on Tibet. He is the main lawyer who researched and drafted both lawsuits for international crimes committed in Tibet and a recent one for crimes in Burma. He is a Professor in International Law at the University of Valencia.

Director of the Centre for Genocide Studies at the Universidad Nacional de Tres de Febrero, Professor in the Faculty of Genocide at the University of Buenos Aires and a member of CONICET (Consejo Nacional de Investigaciones Cientificas y Tecnicas – The Argentine National Centre for Scholars). He has been elected as the president of the ‘International Association of Genocide Scholars’.

A respected academic and a Middle East analyst who was imprisoned in Turkey for his political activism. He is known for his support for Kurdish people’s right to self-determination.

Colombian Theologian and human rights activist based in Bogota. Known for his depth of analysis in contextualising genocide affected communities. He is Vice-President of the Permanent Peoples’ Tribunal.

Former Assistant Secretary-General of the United Nations. He resigned from his 34 year old career in the UN in protest of the economic sanctions imposed on Iraq by the Security Council. Laureate of the Gandhi International Peace Award.

Professor for Public Law, Political Sociology and Sociology of Law at the University of Bremen. He has a long history of engagement in solidarity with liberation struggles in Africa, specially Namibia and the West Sahara. He, for several years, held the UNESCO chair for human rights and democracy of the University of Namibia whilst he was a professor there.

She served as Chief of the Public Affairs Section from the inception of the the Extraordinary Chambers in the Courts of Cambodia (ECCC), the special Cambodian court which receives international assistance through the United Nations Assistance to the Khmer Rouge Trials (UNAKRT). The court is commonly referred to by the more informal name the Khmer Rouge Tribunal or the Cambodia Tribunal.

A Norwegian scholar of International Law and a member of the Permanent Peoples’ Tribunal on extra-judicial killings and violations of human rights in the Philippines.

He is a Burmese democracy activist who founded the Free Burma Coalition in 1995. He is one of the few Burmese intellectuals who have come forward to unconditionally oppose the increased discrimination and violence against the Rohingya Muslims and publicly criticised Aung San Suu Kyi on this issue.