India’s “insensitive policy” and “overt act of defence cooperation with Sri Lanka”, which totally ignores the impact it may have upon not just the sentiments of the people of Tamil Nadu, but the direct effect on the right to livelihood of the Tamil Nadu fishermen, said Chief Minister of Tamil Nadu Ms J Jayalalithaa in a strongly worded letter to Indian Prime Minister Dr Manmohan Singh on Saturday. Indian Coast Guard is allowed to participate in a marine defence exercise and has deputed ships, officers and men to Trincomalee, to participate in an exercise, despite repeated calls from Tamil Nadu to issue a clear policy direction that the Ministry of Defence should not provide training, or engage in any form of co-operation with the Sri Lankan Armed Forces that were responsible for rights violations against “Tamil minority” in the island Ms Jayalalithaa said. 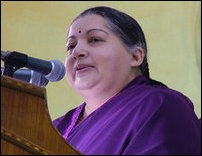 Eezham Tamils are a nation of own country in the island and the Tamil Nadu Chief Minister referring to them as ‘minority’ is undermining the fundamentals of the struggle and is hurting, commented Tamils for alternative politics in the island, while welcoming her voice against the New Delhi Establishment on its military complicity with the genocidal state in Colombo.

The ‘minority’ perspective goes against the spirit of the resolutions passed by the Tamil Nadu State Assembly under the leadership of Ms. Jayalalithaa, the activists commented.

The structural genocidal situation in the island has now reached a point where the ‘minority’ perspective will have no effect at all. Every day allowed for the Colombo regime to rule over the Tamil territory is a step further in irrevocable genocide and this is engineered and carried out with full consciousness by the Establishments in New Delhi, Washington and London. Only a practical and drastic step taken up by Tamils all over the world, especially in Tamil Nadu, could save the situation, the activists further commented.

The activists also cited at the PPT not completing the investigation on the intent and involvement of New Delhi in the genocide of Eezham Tamils in the island and said that Tamil Nadu has a prime duty in bringing them to light.

Full text of the letter from Ms Jayalalithaa follows:

“Over the last two years, I have written to you a number of times bringing to your notice the deep, widespread and strong sentiments amongst all sections of Society and all shades of opinion in Tamil Nadu on the need to hold the present regime in Sri Lanka to account in the aftermath of the ethnic civil strife in Sri Lanka, which was marked by an ethnic pogrom and genocide against the Tamil minority in Sri Lanka. The Tamil Nadu Legislative Assembly has already passed four Resolutions condemning the continuing discrimination against the Tamil minority in Sri Lanka and violation of their human rights and calling for strong response from the Government of India.

“The present Sri Lankan regime is also persisting with its harsh and unreasonable policy of launching punitive and totally unprovoked attacks upon innocent Tamil Nadu fishermen eking out their meagre livelihood by fishing in their traditional fishing waters. Such attacks and abductions are followed by extended periods of detention in Sri Lankan jails, confiscation of boats, fishing nets, and other fishing gear thereby causing extensive economic losses, reducing them to penury and condemning the fishermen and their families to considerable mental agony. The entire fishermen community in Tamil Nadu is agitated over the acts of indiscriminate abduction of our fishermen on the high seas and their prolonged incarceration in prison.

“Please refer to my letters dated 16.7.2012, 25.8.2012, 28.8.2012 and 8.6.2013, wherein I had unambiguously conveyed the deep sense of outrage of the people of Tamil Nadu regarding the imparting of training to Sri Lankan defence personnel at the Defence Services Staff College, Wellington, located in the Nilgiris in Tamil Nadu. While communicating Tamil Nadu’s strong protest, I had urged that the Government of India should issue a clear policy direction that the Ministry of Defence should not hereafter provide training, or engage in any form of co-operation with the Sri Lankan Armed Forces, until satisfactory and credible action is taken by the Government of Sri Lanka to completely stop the human rights violations against the Tamil minority in Sri Lanka and end the unprovoked and marauding attacks on fishermen from Tamil Nadu. I had also written to you on 11.9.2013 that the Government of India should cancel the agreement to supply naval warships to Sri Lanka and ensure that no support of any kind is provided to the Sri Lankan military forces. Most recently on 30.11.2013, I had written to condemn the insensitive proposal made by the Indian Chief of Naval Staff to enroll Sri Lankan Navy personnel in the four year Bachelor of Technology course currently offered to Indian Naval officers.

“I am, therefore, totally dismayed to note from media reports that the Indian Coast Guard is participating in a marine defence exercise and has deputed ships, officers and men to Trincomalee, to participate in this exercise which is reported to be commencing there on 21st December, 2013. This is in complete and callous disregard of the strong views and emotions of the people of Tamil Nadu clearly and unambiguously conveyed to the Government of India, in my letters referred to above, through Assembly Resolutions and through protests, agitations and demonstrations by the people of Tamil Nadu.

“However, the Government of India has still chosen to ride rough shod over the groundswell of emotions in Tamil Nadu and has persisted with its policy stance towards Sri Lanka. In fact, the Government of India has extended on open hand of co-operation to the Sri Lankan Navy through the defence related exercise. This is the same Sri Lankan Navy which continues to prey upon innocent fishermen from Tamil Nadu with impunity and subjects them to abduction, arrest, torture and long periods of detention. Such an overt act of defence co- operation with a nation that puts down its own hapless Tamil minority citizens and perpetrates serious human rights violations upon them, can only be termed as outrageous and condemnable.

“I wish to convey our strong protest against this insensitive policy of defence co-operation with Sri Lanka, which totally ignores the impact it may have upon not just the sentiments of the people of Tamil Nadu, but the direct effect on the right to livelihood of the fishermen in the coastal districts of the State. I, therefore, request you to urgently review this policy and instruct the Ministry of Defence not to participate in the naval exercises in Sri Lanka and to immediately recall the two Indian Coast Guard ships and personnel.

“May I request an urgent response on this sensitive issue?”