"Based upon my first-hand personal experiences working with the Palestinians at their peace negotiations and the Bosnians at their peace negotiations, the Tamils cannot trust the United States, the United Kingdom, the United Nations, the European Union and its Member States to do the right thing for them. The Tamils can only trust in themselves,” responded Professor Francis Boyle on Monday, when TamilNet asked him what would be his advice to the Tamil diaspora in engaging with the ‘International Community’. TamilNet posed the question to Professor Boyle following his recent interview on Bosnian ‘peace’ negotiations to the Institute for Research of Genocide, Canada.

[Full text of Prof Boyle’s interview to the Institute for Research of Genocide is here.] 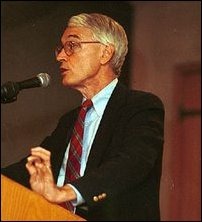 When asked whether ethnicity or nationalism, or socio-economic problems was the main issue of the conflict, Boyle said, "it was outright genocide by Yugoslavia and Milosevic against the Bosnians. They proclaimed independence as was requested by the European Union. The EU put out guidelines and said to Bosnia and Croatia that they needed to have elections. They had elections and they voted for independence and they were hit with genocide and aggression," Boyle told the Canadian organization on Genocide research.

On the behavior of the British representative at the peace negotiations for Bosnia, Boyle said, "I dealt personally with David Owen. He is a typical British, imperialist, establishment, racist individual who believed Muslims were an inferior race of people. We were just supposed to do what he told us to do. I made it clear that that was not going to happen on my watch."

"Europe just did not want a Muslim state in Europe. It was that simple. It went back to the crusades.

This has to do with anti-Muslim prejudice in Europe going back to the crusades, at least. At that time, before 9/11 2001, we really didn’t have that in the United States. We didn’t have experience with the crusades and all the rest of that. But eventually, Clinton would go along with a carve-up too," Boyle said.