The occupying Sri Lankan military has almost transformed the narrow strip of Chu’ndik-ku’lam sandbar, which links the Jaffna peninsula with Vanni mainland, into a Sinhala Military Zone (SMZ), denying the Tamil fishermen of Vadamaraadchi East and Vadmaraadchi, access to the coastal strip and the seas off Chu’ndikku’lam. While the occupying SL military is carrying out a new kind of Sinhalicisation with settlements for Sinhala fishermen, who endanger the fishing environment, the SL Ministry of Wildlife Resources Conservation has schemed occupation under the so-called extended development of the Chu’ndik-ku’lam Natural Park, bringing 11,149 hectares and a coastal strip of more than 50 square km into the exploitation of Colombo. 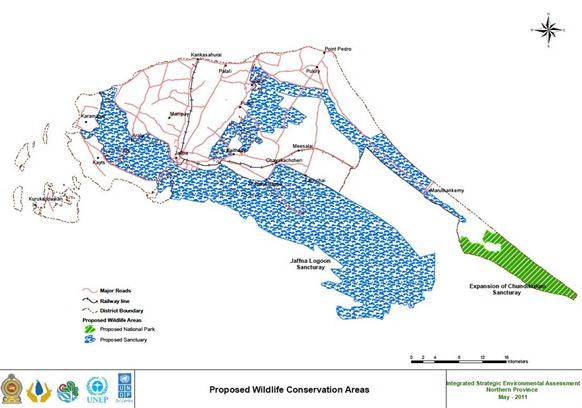 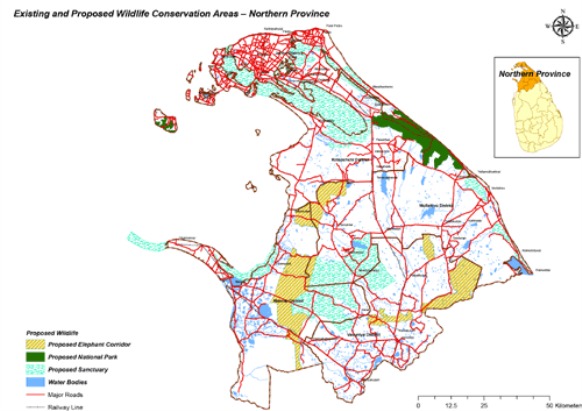 Another map by SL Department of Wildlife Conservation, revealing the extent of Sinhalicisation

EPDP’s opposition member of Northern Provincial Council (NPC) and the district organizer of EPDP in Ki’linochchi, Mr Thavanathan, took part in the opening ceremony of the ‘Bear Garden’ resort together with the the SL Government Agent of Ki’linochchi district.

The Tamil families that were residing in Chu’ndikku’lam have been refused resettlement. The Sri Lanka Navy (SLN) has already seized the public buildings, including the post office building at Chu’ndik-ku’lam.

SL ministry of fisheries and resources development is targeting a corporate occupation from South as part of the Sinhalicisation scheme.

Having access to a major seabed along the narrow coast, Chu’ndikku’lam stood for the major portion of fish supply to Vanni and Jaffna, Tamil fishermen society representatives say.

Before the occupation by the SL military, hundreds of Tamil fishermen from nearby villages, Uduth-thu’rai, Thaazhaiyadi and Maruthangkea’ni in Vadmaraadchi East and Vadamaraadchi, used to camp at Chun’dikku’lam on a permanent basis from March to October every year for seasonal fishing.

Between November and January, local and migrant birds frequent the lagoon. 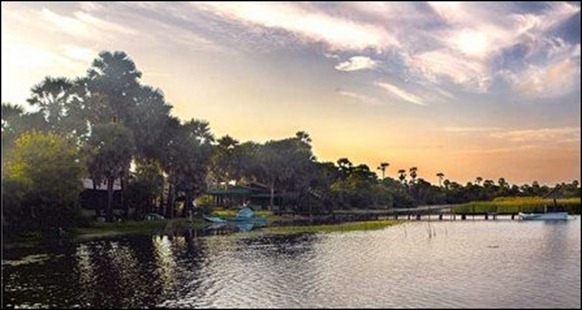 The SL ministry for wildlife resources conservation has schemed the expansion of the area into a Natural Park, using the funding from UNDP and UNEP in the name of developing 11,149 hectares of the bird sanctuary.

In 2009, the SL military in Jaffna advanced into Chu’ndikku’lam during the last phase of the Vanni war.

Despite the end of war, the SL military has continued constructing military bases in the area.

After seizing the area, the occupying Sri Lanka Navy (SLN) imposed a complete ban on Tamil fishermen accessing their coastal strip for camping. Tamil fishermen are now not allowed to access the sea.

But, Sinhala fishermen were brought in with the backing of SL Navy to engage in fishing. The fishermen from the South were deploying illegal methods of fishing, causing an environmental disaster to the seabed, according to the representatives of fishermen societies in Jaffna.

The occupation and expansion of the occupied land, lagoon and sea is part of a calculated move by Colombo, political observers say.

The latest construction of the resort adding to already open facilities is compared with what has been taking place in Kaangkeasan-thu’rai (KKS) in Jaffna.

Colombo is engaged in strategic Sinhalicisation with an aim of permanently choking the Jaffna peninsula in all the three linking entries to Jaffna from Vanni mainland.

With an aim to convert Poonakari into a major hub of Sinhala militarization and colonization, more than 30,000 SL soldiers have been deployed there.

Similar to the Vanni war, genocidal Colombo is now hurriedly engaged in a colonisation war against the unarmed and demographically weakened nation of Eezham Tamils. India and USA, which labelled the former as war against terrorism now smokescreen the latter as ‘reconciliation’ and ‘post-war development’. Shown in pink is the targeted area for industrial and fisheries colonisation. The yellow circles are the major SL military colonies. [Map by TamilNet]

At Naavat-kuzhi, where the two highways A9 and A32, the only existing land arteries that lead into Jaffna from the south and the western coast, meet, a small Sinhala colony has been already established with SL military guarding the settlement.

Now, the strategic sandbar linking the mainland with Jaffna is being converted into a Sinhala zone under the so-called ‘Natural Park’ extension scheme.

A deputy director at the Department of Wildlife Conservation (DWC), Manjula Amarathna, has taken command of the expansion project, informed civil sources said. Another key area of his focus is Madu Road, a long time plan of Colombo for Sinhalicisation, the sources added.

A coordination project, linking the ministries and various stakeholders, was carried with international assistance, under the name of Integrated Strategic Environment Assessment (ISEA) – North.